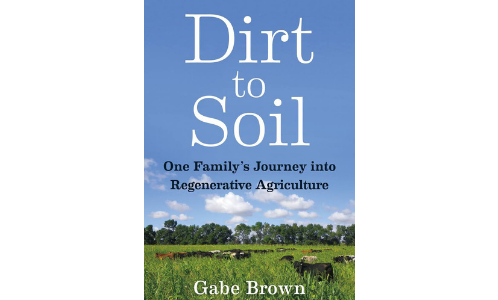 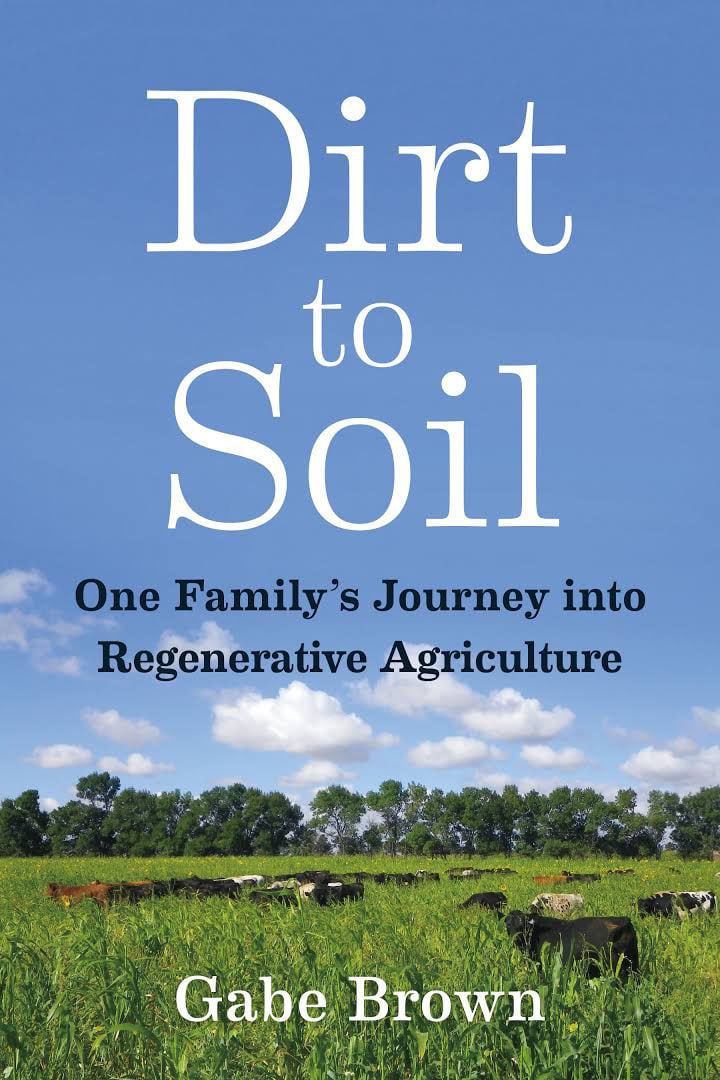 By Gabe Brown with Courtney White

“Dirt to Soil,” by soil health evangelist and North Dakota farmer Gabe Brown is one of them.

Brown, who farms in Burleigh County, North Dakota, is legendary in the modern soil health fraternity. He and his wife, Shelly, began farming alongside her parents in 1981. The land was farmed conventionally at the time—limited crop rotation and full tillage. Gabe started a Gelbvieh cowherd, grazing the herd similarly to his neighbors. He realized that farming and ranching conventionally wasn’t going to pay the bills. He began no-till farming in 1994, incorporating practices proven by no-till guru Dwayne Beck, from South Dakota.

Brown began farming regeneratively, learning that no-till could help him decrease input costs for fertilizer and weed control. But it wasn’t a panacea.

In the mid-90s, Gabe lost all his cash crops, four years running. Drought, hail, blizzard—all wrecked his yields, causing him to seriously question his choice of careers. But Brown didn’t give up, and the lessons learned changed the way he farmed.

“Dirt to Soil” is part biography, part textbook. Brown details his journey to a regenerative agriculture system, which includes eliminating tillage; growing diverse cash and cover crop species, sometimes in mixes; and incorporating livestock into the system. Make no mistake, it is a system. Each of these components is vital to the system’s success. And interestingly, Brown continues to add components to further diversify the operation and help the system succeed just a bit more. For example, he has added grazed pork and chickens, sells honey, is developing fruit and nut orchards and has an on-farm store through which he markets these products.

Yet, while these new revenue streams are important to the farm’s success, Brown realizes he is doing more with less: zero fertilizer and fungicide or pesticide applications. Keeping the ground covered with either cover crops or cash crops at all times, and feeding livestock on the cover crops, improves cash flow. Meanwhile, the dirt he began farming in 1981 has turned into soil, full of microbial activity and improving every year.

It is logical that one who reads “Dirt to Soil” could assume that the process has been easy for Brown and his family. It has not. He has made mistakes, and some of his ventures haven’t turned out as planned. But Brown has an uncanny ability to learn from those mistakes and I’m grateful he shares them in this book.

For those who wish to improve soil health, “Dirt to Soil” is a must-read.

After you’ve read Gabe Brown’s book, you’ll want to hear him in person. The second annual Soil Health U program, in Salina, Kansas, Jan. 23 to 24, 2019, is your opportunity. Brown is scheduled to be one of the keynote speakers. Check www.soilhealthu.net for more information.

Bill Spiegel can be reached at journal@hpj.com.

As Gabe Brown gained knowledge and applied it to his operation, his soil was healthier, absorbed and retained moisture and made the operation more profitable. Brown will be a keynote speaker at the Soil Health U and Trade Show, Jan. 23 to 24, 2019, at the Tony’s Pizza Event Center in Salina, Kansas.