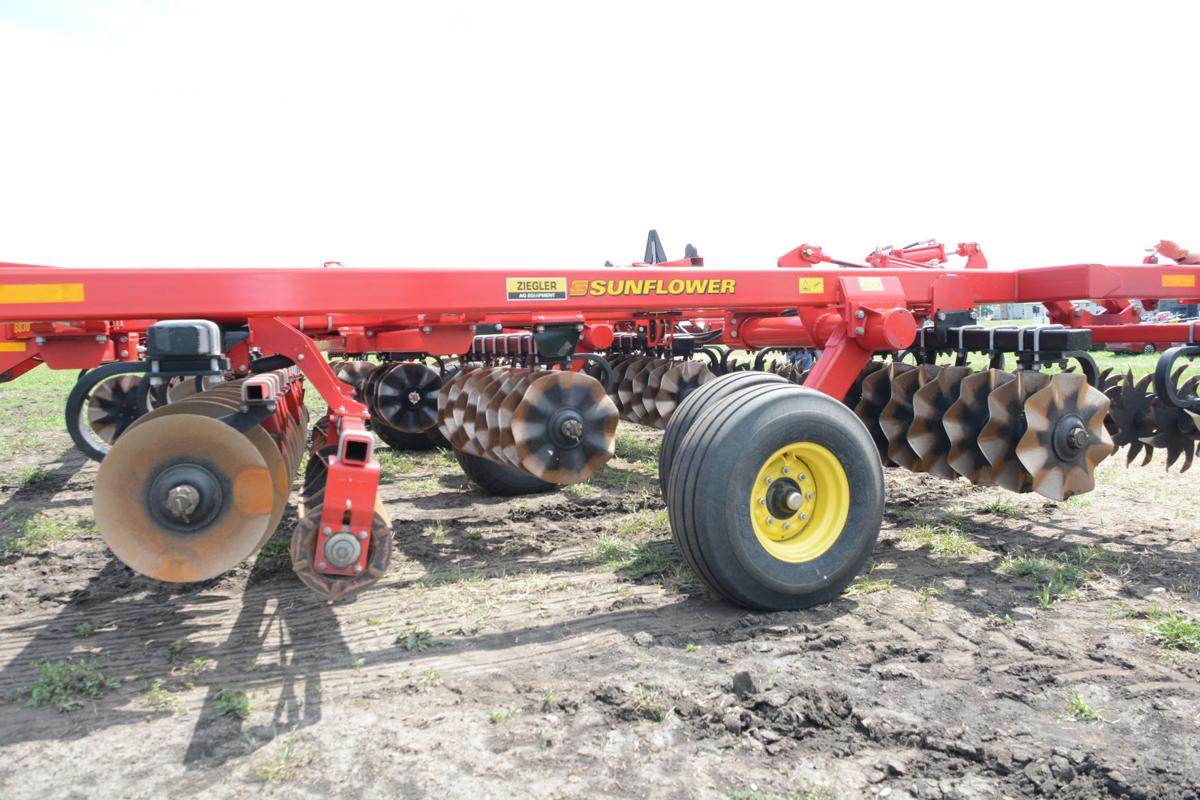 The Sunflower rotary finisher combines several tillage tools in one high-speed pass, plus folds up for narrow transport. (Journal photo by Bill Spiegel.) 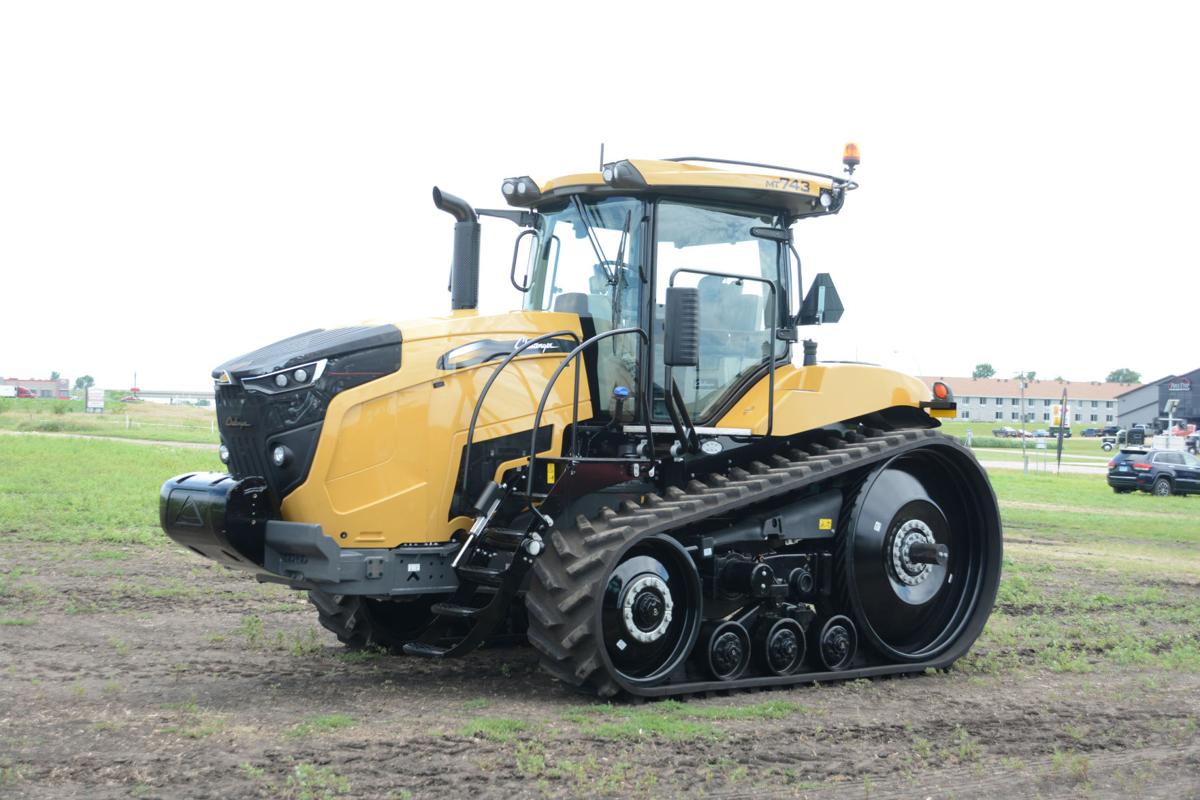 The all new MT700 tracked tractors from AGCO promise increased operator comfort, more efficient powertrain and the latest in connectivity technology. There are three models, ranging from 380 to 430 horsepower. (Journal photo by Bill Spiegel.) 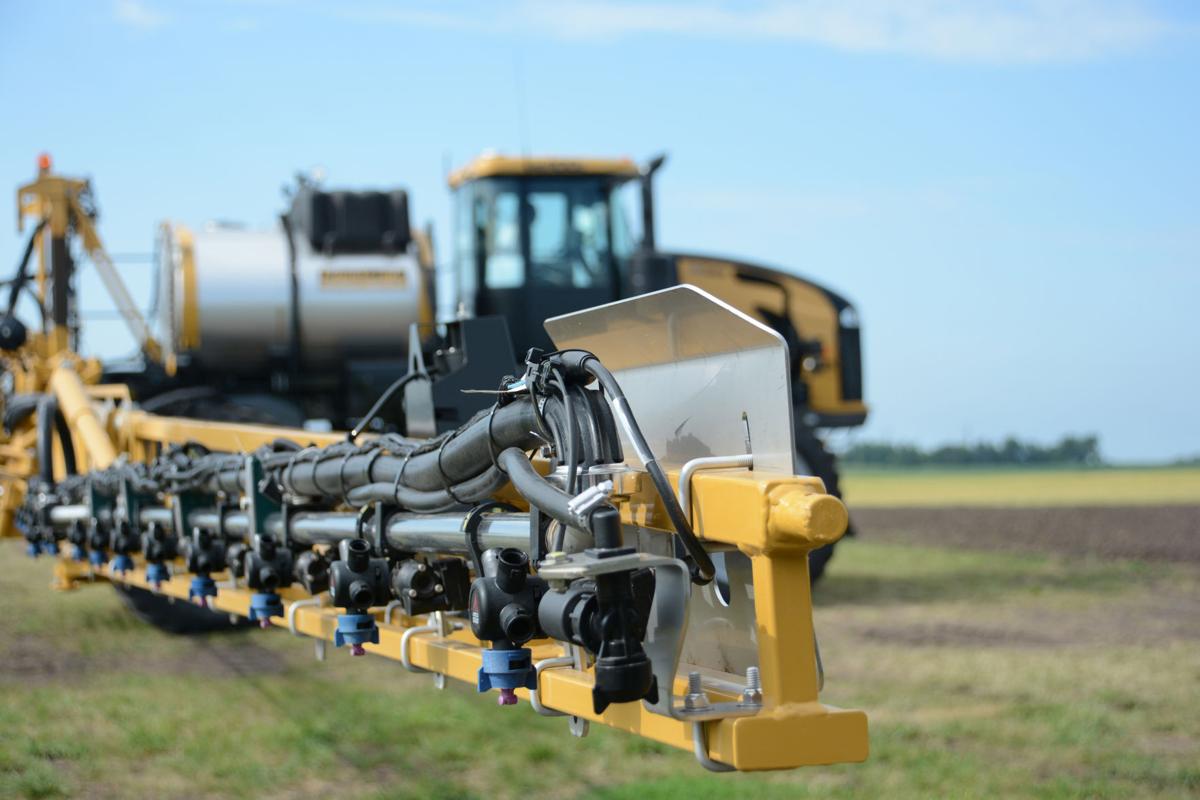 There are no closed ends on the boom plumbing of the RoGator C series applicators, allowing for easy cleanout. Complete system cleanout using RoGator’s Liquid Logic boom cleanout and recovery system results in less than 2.5 gallons of product left in the system. (Journal photo by Bill Spiegel.)

Read on for more on the WR9900 series windrower from Hesston by Massey Ferguson, the plush new Challenger tracked tractor, a high-speed Sunflower all-in-one tillage tool and a revamped RoGator. For more information, visit www.AGCOcorp.com.

Hesston by Massey Ferguson, the hay equipment brand from AGCO Corporation, is replacing its WR9800 self-propelled windrowers with their new WR9900 series windrowers. The design and features of the new WR9900 series were driven by what hay producers and custom forage harvesters said they wanted in a new windrower—increased performance, power and comfort.

The WR9900 series offers four new models ranging from 160 to 265 horsepower, all with the power to operate the 9200 series auger, disc headers, the new 5400 series draper headers and double crimpers.

“When you start cutting a lot of these big heavy crops, producers need that extra power to push it through the header and if they are running through double crimpers it eats up the horsepower,” said Dean Morrell, product marketing manager for Hesston by Massey Ferguson.

The range in horsepower and the variety of options fit every type of producer. WR9900 series windrowers are designed to operate a 13-foot disc header and the remaining three models can be equipped with either a 13- or 16-foot header.

“A producer can decide what horsepower he wants, what header he wants and what price range he wants,” Morrell said.

The new 265-HP Model WR9980 is the company’s most powerful windrower. It can handle heavy crops such as thick grass or winter forage without the inconvenience of a larger wheelbase, added compaction-causing weight or overall dimension.

“The big machine in this new series is designed for commercial producers and big acreage guys,” Morrell said. “If a producer wants to put a 40-foot draper header on this big tractor he can do that.”

An owner operator with 500 acres or less will probably want the smaller machine with a sickle header. A commercial operator will tend to go more with the rotary header because it is faster and can cover more acres.

The one common element across all of the new models in the WR9900 series is the cab. Just as operators asked for more horsepower and more throughput capacity, they also requested a cab with more comfort and convenience. These cabs feature an air-conditioning system with 50 percent more cooling performance than AGCO’s previous windrowers, foot pegs for greater comfort, Bluetooth capability with USB plug-in to charge phones or other handheld devices and a new step platform outside of the cab making it easier and safer to step onto the header.

The hydro handle has up to 16 programmable functions that can be specific to the operator’s preferred configurations.

The SF6830NT high-speed rotary finisher lineup helps users complete multiple tillage tasks in one pass in preparation for planting with the industry’s new high-speed planters. The NT series of narrow-transport SF6830 rotary finishers come in two models, a 17-foot, 8-inch and 21-foot, 5-inch version, both of which fold to a road width of 9 feet, 10 inches.

The rotary finisher includes a gang of 20-inch, low concave disc blades set at an 8 degree angle to move soil; followed by service-free disc gang reels that move at twice the speed of the disc gangs. This helps level and size residue. Wavy coulter blades are positioned in a gang behind the blades and reels to continue sizing crop residue and break up the soil; the final element of the SF6830 series is two intermeshed gangs of Sunflower’s exclusive Rotary Spider Tines. These tines are designed to ensure the soil is leveled and that crop residue is equally mixed across the entire width of the tool. The Rotary Spider Tines sculpt the seedbed floor flat, as they lift the soil and blend it with crop residue. The SF6830NT finisher will be available in January 2018.

The sixth generation of Challenger’s 700 series of tracked tractors packs more power, fuel efficiency and operator comfort than its predecessors, and according to the company—more than any other tracked machine on the market.

The MT700 series—available in 380-, 400- and 430-horsepower iterations—features new styling that looks downright sleek. That package covers an entirely new AccuDrive powertrain, featuring AGCO Power 9.8L diesel engines mated to the Challenger Accu-VT continuously variable transmission for smooth, seamless speed control. The engines are cooled with a “concentric air system,” in which the radiator and cooling fan are aimed slightly upward to pull in cool, clean air.

Now instead of running at full throttle to meet the hydraulic needs, the AccuDrive system allows full output at 1,700 RPM, with a peak torque range of 1,200 to 1,600 RPM. This system results in a quieter working environment for the operator.

Operator ride has improved, too, as the MT700 series is the first two-track machine with three stages of suspension, plus oscillating midwheels that hug the ground in uneven surfaces. Called MaxxRide, the integrated system adds hardbar suspension and cab suspension to improve ride quality without sacrificing power and traction. The primary suspension has been redesigned with a combination of coil springs and shock absorbers to improve the ride.

“Handling at higher road speeds also has been improved, and ride comfort when traveling on the road is noticeably better than previous models,” said Josh Kenney, tactical marketing manager at AGCO.

Inside the cab, operators will note a number of amenities, including air-ride seat, larger instructors’ seat and Bluetooth capability. AGCO’s “AccuTerminal” touchscreen manages tractor settings and adjustments, and all controls are within easy reach of the operator.

A new LED light package adds more lights at the rear of the tractor, positioned to provide a clear view out to each end of a 24-row planter.

A limited number of MT700 series tractors is available this fall, with full production in 2018.

Today’s herbicide-sensitive crops demand sprayer operators to do a better job of sprayer cleanout than ever before. Just a sniff of the wrong herbicide, caught up in the sprayer system, can have a devastating impact on cash crops.

The RoGator C series self-propelled row crop applicators, with all-new LiquidLogic system, makes system and boom cleanout a breeze, reducing the potential for off-target application and make cleanout faster. “The C series provides features for the market that answers the challenges of today,” said Mark Mohr, tactical marketing manager for AGCO’s application division. The RoGator C series features FlowLogic recirculation plumbing that keeps product moving through the boom, plumbing and filters to reduce chemical buildup and help eliminate plugged spray tips. “By eliminating dead ends in the boom pluming and cleanout, we can flush booms and get residue out more effectively,” he said.

Less than 2.5 gallons of product is left into the system thanks to ClearFlow, which uses air to force product from the booms or reload station back into the tank.

And, new self-priming booms help save time and money since product flows quickly through the entire boom once the product pump and recirculation are turned on.

This is the 25th anniversary for RoGator, which also adds the new SmartDrive all wheel drive system, coupled to all-wheel traction control, which adjusts motor displacement when a wheel starts to slip, keeping the machine moving in the field. The anti-locking brake system and improved hydrostatic braking deliver stopping power and speed control.

In the cab, cruise control gives the operator a consistent speed for accurate application and easy speed changes in the field and on the road. Shuttle shift makes changing direction fast and easy and an improved joystick boosts operator comfort.

Redesigned based on operator requests, the new joystick is compact with a comfortable, ergonomic feel.