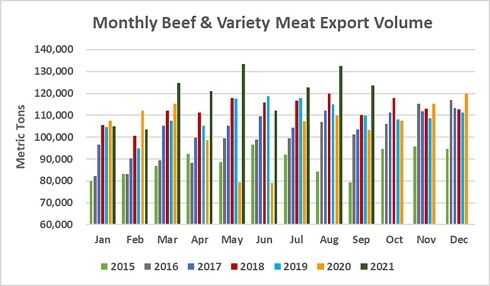 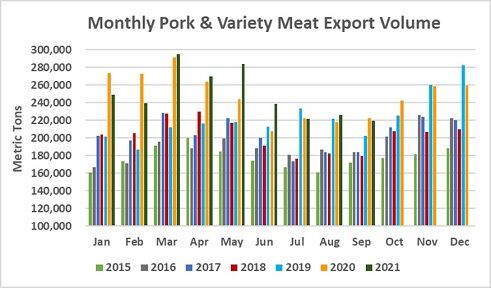 Both U.S. beef and U.S. pork exports are on a record pace through September, according to data released by USDA and compiled by the U.S. Meat Export Federation. Beef exports posted one of the best months on record in September, with value climbing nearly 60% above last year. Pork export volume was slightly below last September, but value still increased 8%.

Beef exports continued to soar in September at 123,628 metric tons, up 20% from a year ago and the fourth largest volume of the post-BSE era. Export value jumped 59% to $954.1 million—the second highest month on record, trailing only August 2021. For the first three quarters of 2021, beef exports increased 18% from a year ago to 1.08 million metric tons, valued at $7.58 billion—up more than $2 billion (36%) from the same period last year. Compared to the record year of 2018, January-September exports were 7% higher in volume and up 24% in value.

Japan, South Korea and China-Hong Kong are all on track to be $2 billion destinations for U.S. beef in 2021, with strong growth in chilled beef exports to Japan and Korea. Beef exports to most Western Hemisphere markets are also trending significantly higher than a year ago.

While September exports of U.S. lamb were up only slightly from a year ago at 948 metric tons, value climbed 39% to $1.6 million. Through September, lamb exports were up 5% to 9,945 metric tons, valued at just under $14 million (up 11%). Shipments increased to leading market Mexico and trended higher to the Dominican Republic, Bermuda, Guatemala and Honduras.

"Facing significant logistical headwinds and higher costs, these outstanding results are really a testament to the loyalty and strong demand from our international customers and to the innovation and determination of the U.S. industry," said USMEF President and CEO Dan Halstrom.

Halstrom explained that a rebound in pork and beef variety meat exports, which took a step back last year amid COVID-related production obstacles, has been a strong source of momentum in 2021, reflecting exceptional global demand for high-value protein.

"The increase in the variety meat capture rate, and the resulting increase in exports, is especially encouraging because the labor and transportation challenges certainly have not gone away," Halstrom explained. "But these items are commanding a strong premium overseas, making it more feasible to get them into international commerce. Variety meat exports are a great complement to our strong domestic and international demand for muscle cuts, helping maximize carcass value."