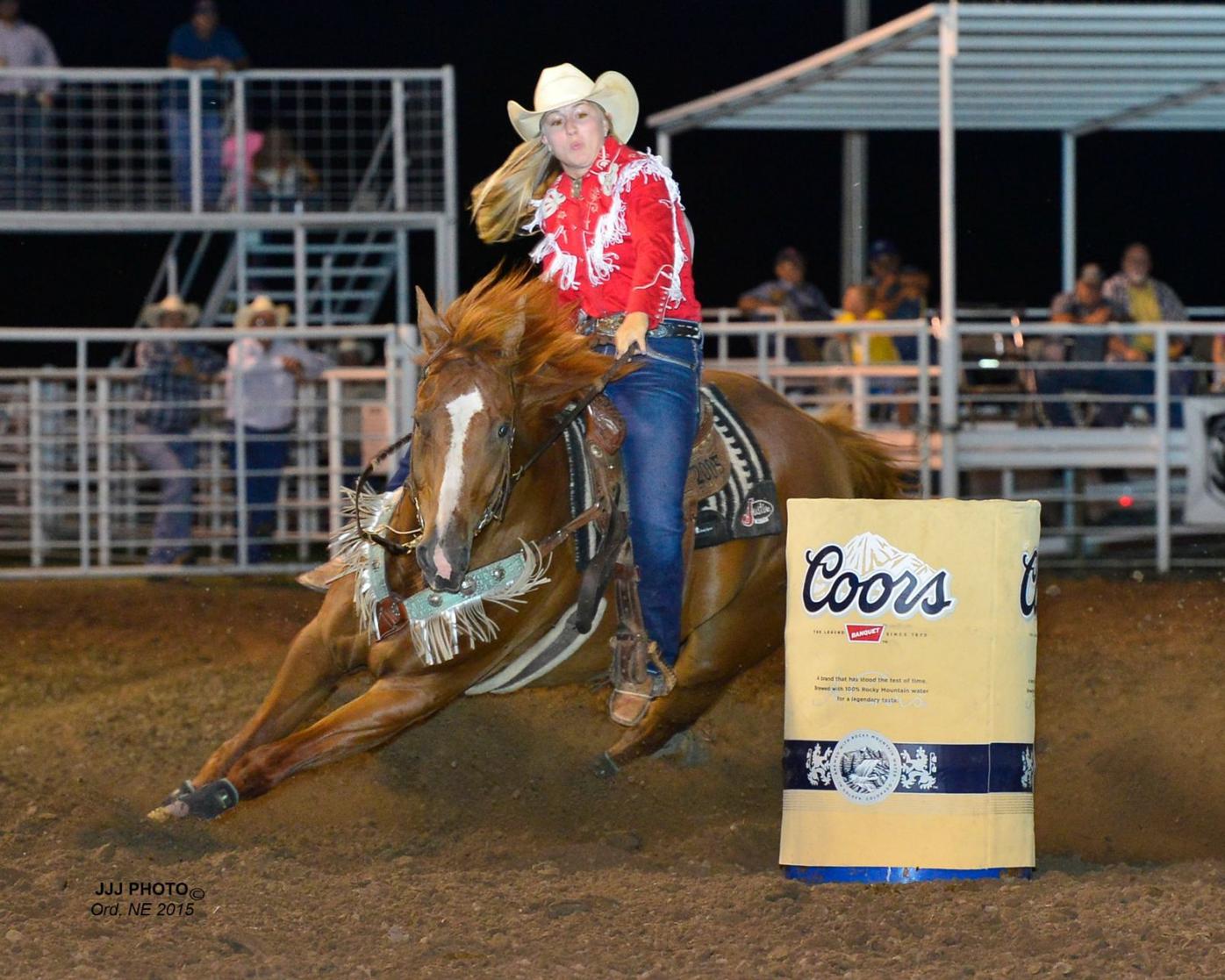 Dusta Kimzey competes at the 2015 Phillipsburg rodeo. The Strong City, Oklahoma, cowgirl and her brothers, Sage and Trey, will be at Kansas Biggest Rodeo this weekend, just like they have for years, first with their dad, and now as contestants. (Photo by JJJ Photo.) 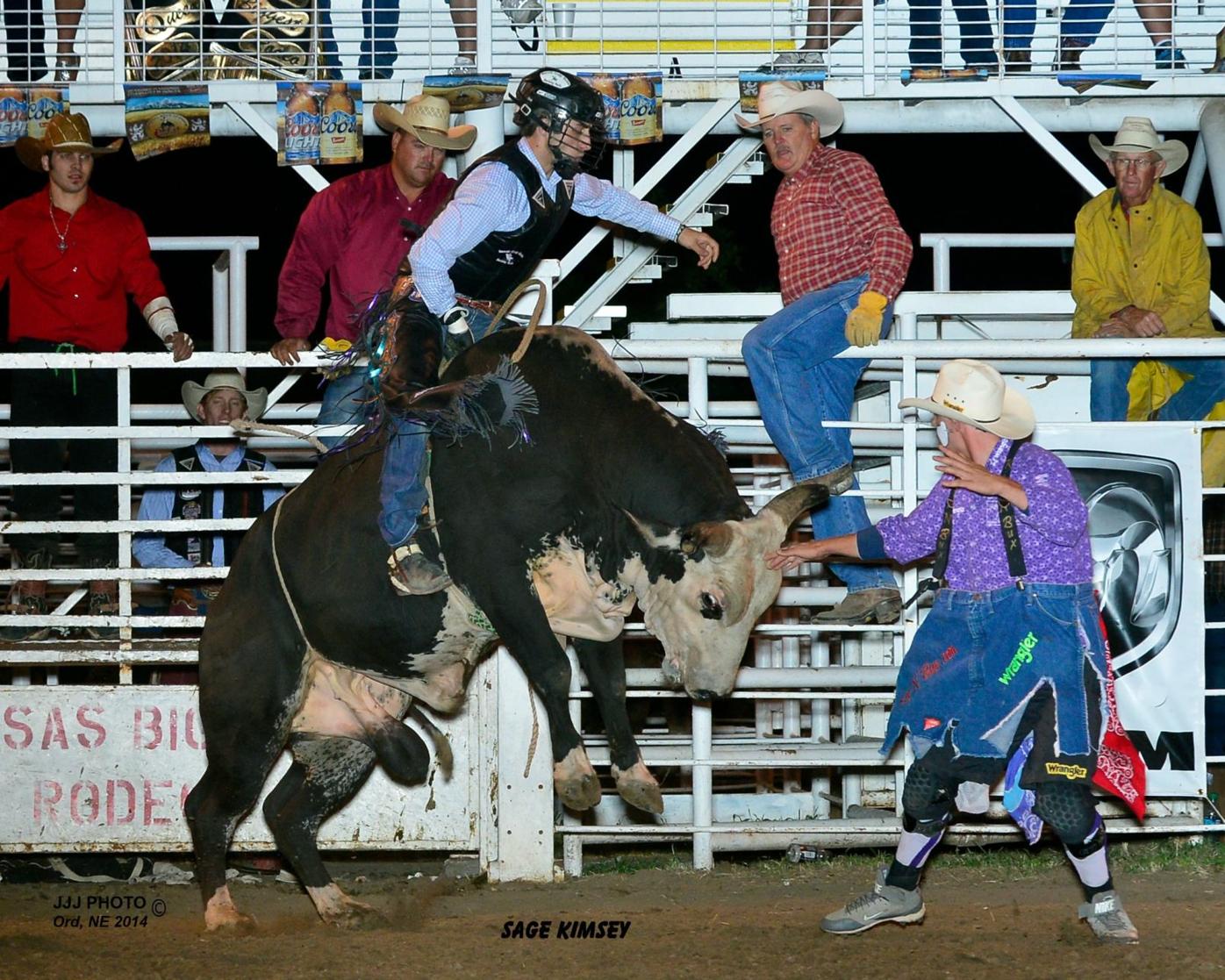 Sage Kimzey rides at the 2014 Phillipsburg Rodeo. The three-time world champion returns to Phillipsburg this week, along with his older sister and younger brother, who will also compete. (Photo by JJJ Photo.)

Dusta Kimzey competes at the 2015 Phillipsburg rodeo. The Strong City, Oklahoma, cowgirl and her brothers, Sage and Trey, will be at Kansas Biggest Rodeo this weekend, just like they have for years, first with their dad, and now as contestants. (Photo by JJJ Photo.)

Sage Kimzey rides at the 2014 Phillipsburg Rodeo. The three-time world champion returns to Phillipsburg this week, along with his older sister and younger brother, who will also compete. (Photo by JJJ Photo.)

It’ll be like a mini-family reunion for the Kimzeys this week.

When Kansas Biggest Rodeo rolls into town on Aug. 3 to 5, the three Kimzey siblings—Dusta, Sage and Trey—will be in town to compete.

The children of Ted Kimzey and Jennifer Kimzey have grown up at the Phillipsburg rodeo.

The eldest of the three, Dusta, will barrel race in Phillipsburg on Aug. 3. She’s been a member of the Women’s Pro Rodeo Association since 2013, and since then, “I’ve never missed (competing at) Phillipsburg,” she said.

When they were kids, the three of them traveled with their dad, bullfighter turned barrelman, and Phillipsburg was special to them. Dusta remembers hanging out with the Rumohr family, Greg, Donna and daughters Railey and Ruby, while Greg, who passed away in 2015, worked as a bullfighter in Phillipsburg. “We have a lot of family history in Phillipsburg,” she said. “It’s a really fun rodeo for us. They make you feel like home.”

Dusta and Trey trick ride together, as an act called Tricked Out. Sage was part of it for a while, but when he started riding bulls fulltime, it was the two others. Dusta will trick ride as part of the entertainment at the Hill City rodeo before she heads to Phillipsburg.

The trick riding is in high demand, Dusta said, as a specialty act. “I’ve only had one weekend off since May, and I ran barrels that weekend. It’s been a really, really good year for it.” At this point, she is trick riding nearly full time and working at a pharmacy part time. The trick riding is “a dream, and a life goal for me, more than pharmacy” work. “I’ll go home in September and work part time, but I haven’t taken a full time job as a pharmacist and have no intentions of it, at least for a while. That way I can rodeo full time if I want.”

Middle child Sage, a three-time world champion bull rider, is also the 2016 Phillipsburg rodeo champion. The 25 year old cowboy is the PRCA’s youngest millionaire and is currently ranked first in the world standings, with a $40,000 lead over the number two man, Garrett Smith.

Younger brother Trey could some day be nipping at his heels.

The 18-year-old just graduated from high school this spring and got his PRCA permit in January. He’s hitting the rodeo road hard, and seeing his brother have success has shown Trey that success in bull riding is attainable. “You just gotta go get it instead of waiting for it to happen.”

Trey, who will be a freshman at Southwestern Oklahoma State this fall, plans on continuing on his PRCA permit card this year. Next year will be his rookie year, and he’d like to reach two goals in 2018: win rookie of the year and qualify for his first Wrangler National Finals Rodeo.

When he is announced at rodeos, announcers mention his older brother and Sage’s three world titles, and it never gets old to Trey. “I’m proud of what he’s done. I’m trying to follow in his footsteps.”

Sage rides Thursday night; Trey rides Saturday night. There is a chance, due to injury or travel difficulties, they will “turn out”—not compete in Phillipsburg.

Slack, the extra competition that doesn’t fit into the performances, will be at 7 p.m. on Aug. 1 and 2. It is open to the public.

Performances are August 3, 4 and 5 and begin at 8 pm each night.

Associate memberships are available for sale. They are $150 and include a rib dinner at the rodeo grounds during slack on Aug. 2, preferred parking, and raffle tickets for a 2017 John Deere Gator and two trips to the Wrangler National Finals Rodeo. They can be purchased from Heritage Insurance in Phillipsburg, First National Bank, Matteson Motors, Cliff’s Welding and rodeo committee members.

For more information, visit the rodeo’s website at KansasBiggestRodeo.com or call 785-543-2448.