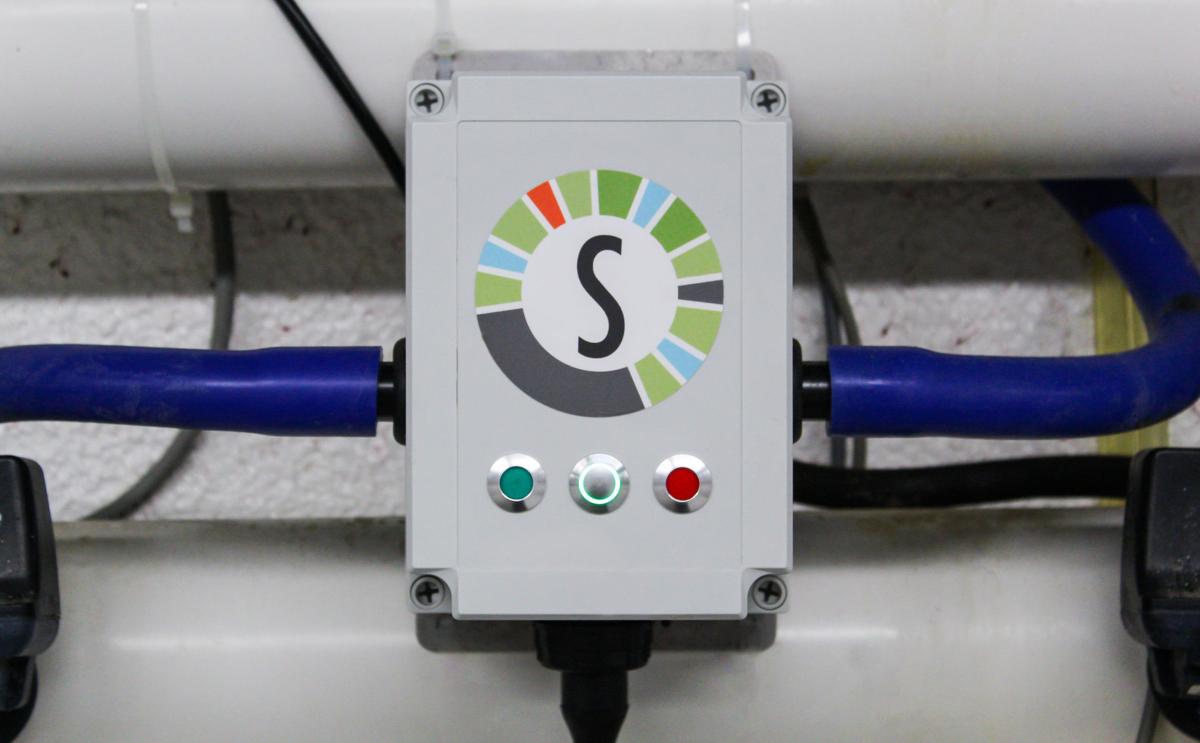 The SomaDetect technology can be easily incorporated into an existing milking system and provide rapid, onsite analysis of raw milk. (Courtesy photo.) 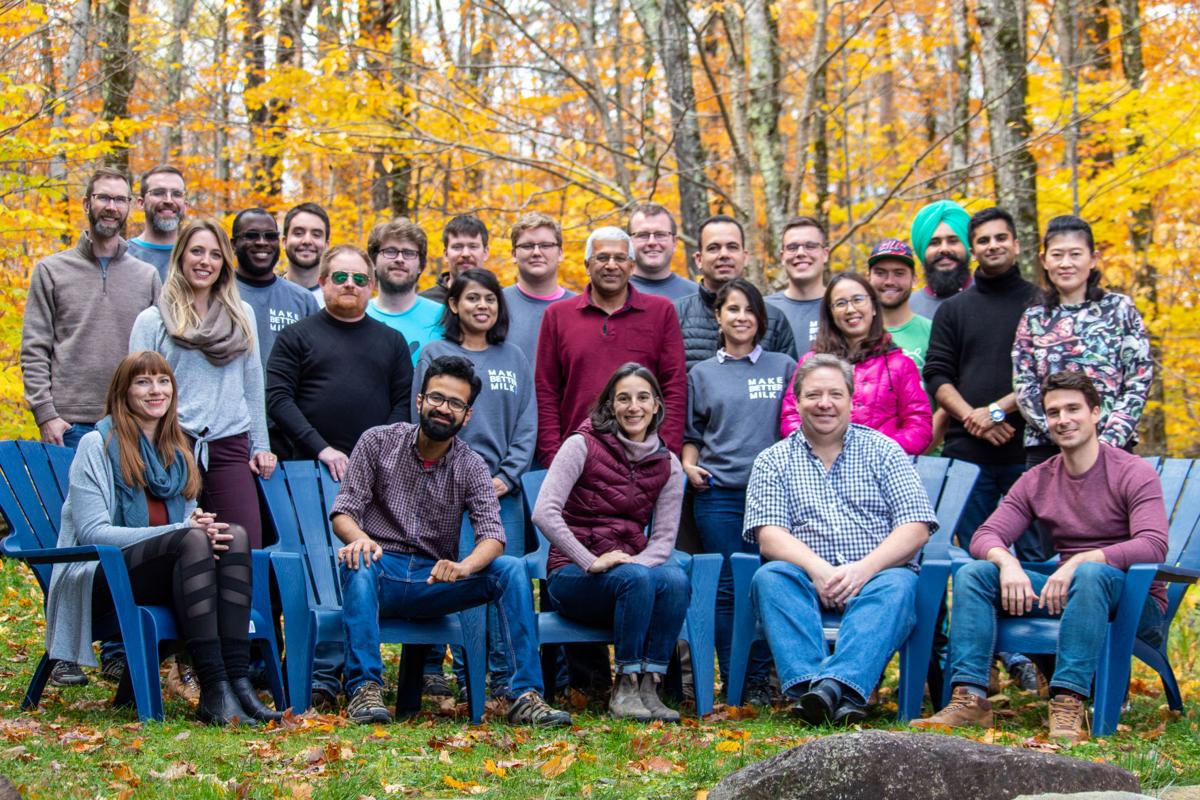 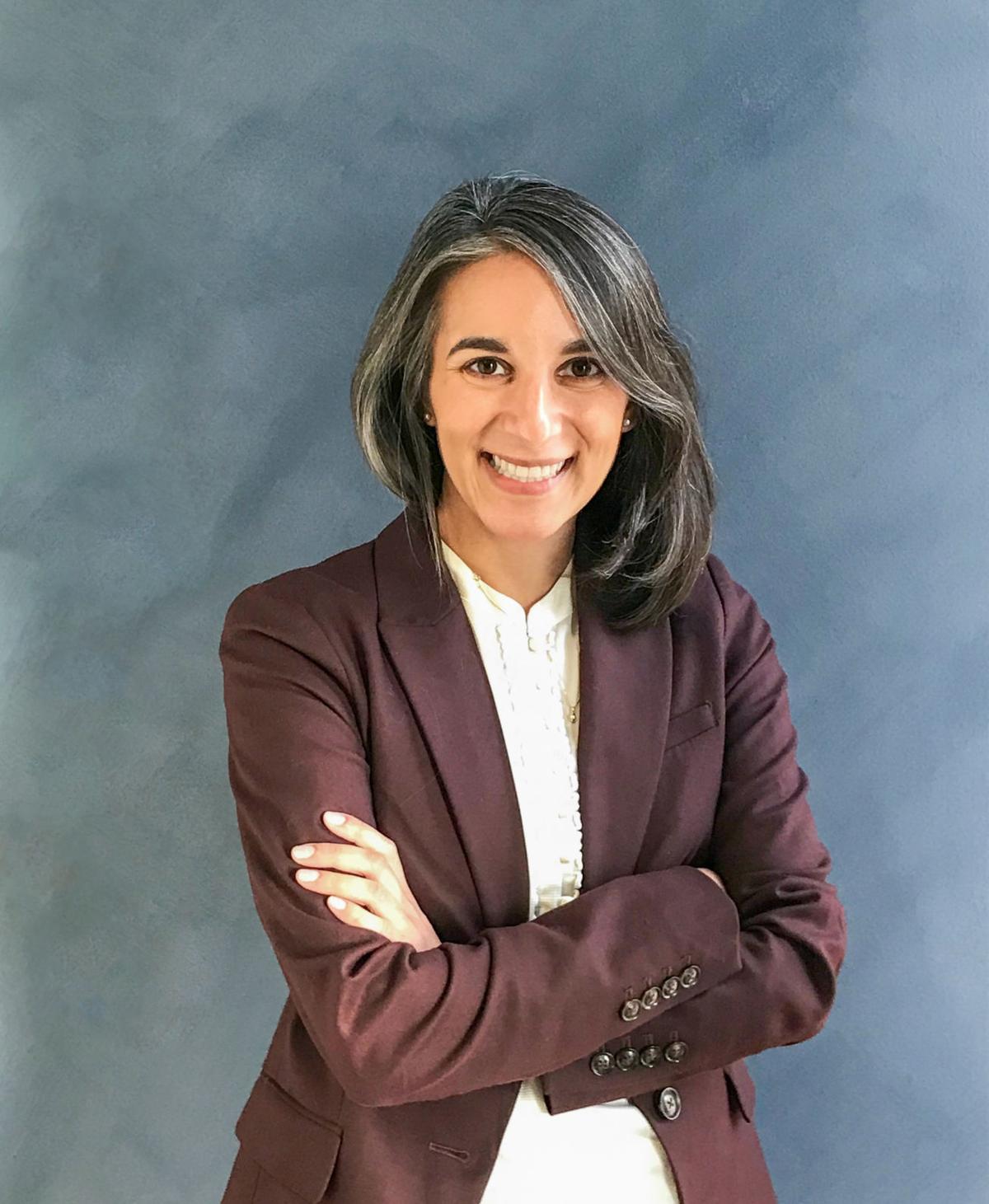 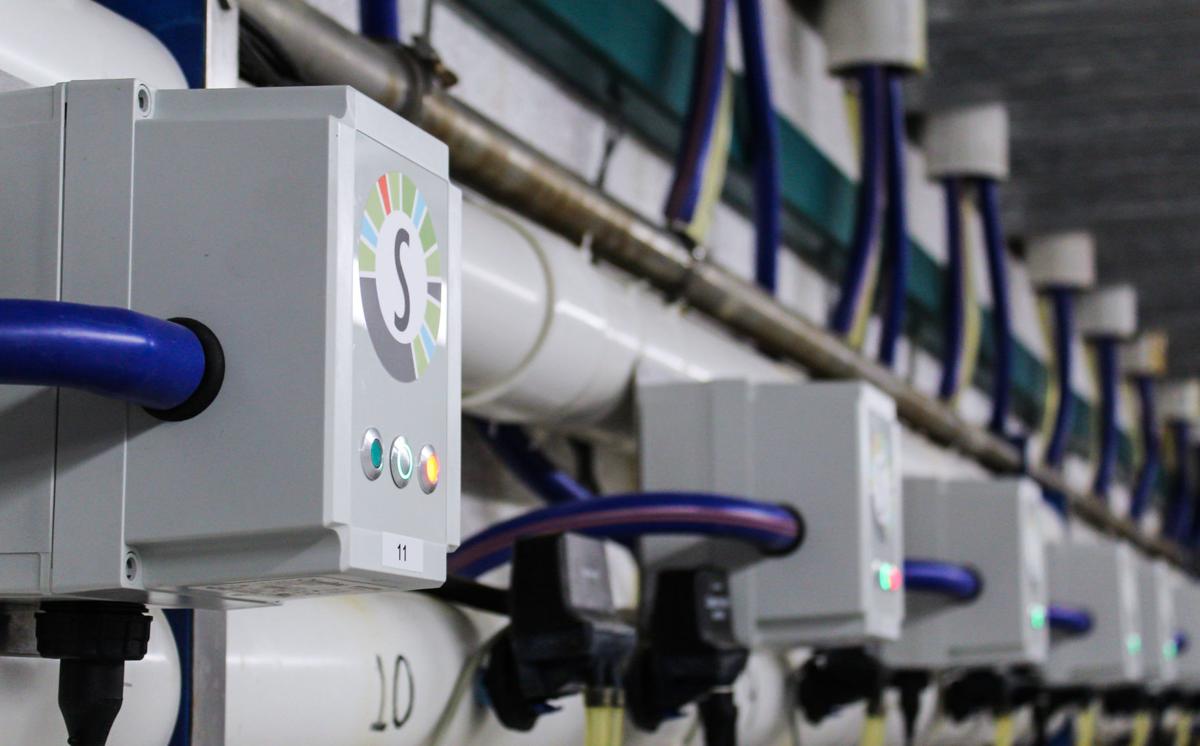 SomaDetect’s light scattering technology can measure ranges of progesterone in milk, antibiotic residuals, protein, and fat to protein ratios and somatic cell counts to indicate mastitis in both the subclinical and clinical forms. (Courtesy photo.) 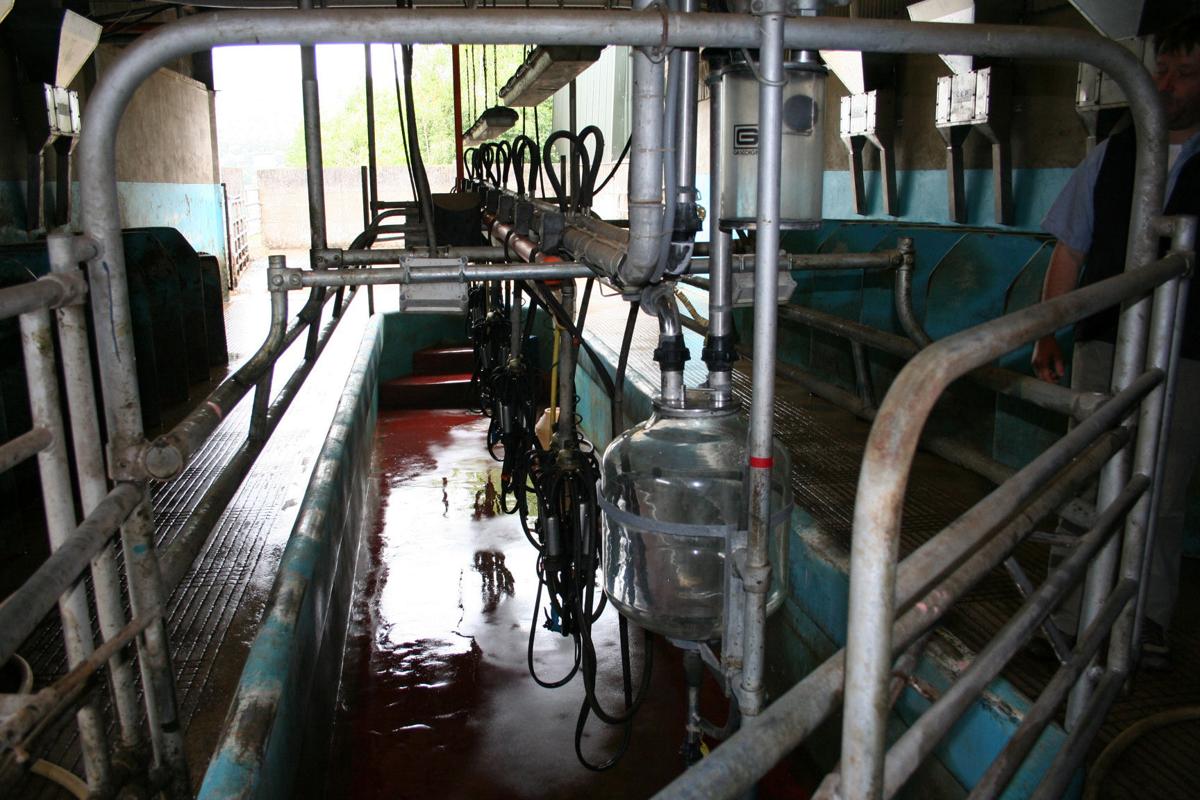 Other systems exist that offer similar features, but the No. 1 differentiator for SomaDetect is that it does not require the use of any chemicals or reagents, meaning the milk used for measurements is unaltered and can be returned to the milking line after measurement. (Journal photo by Lacey Newlin.) 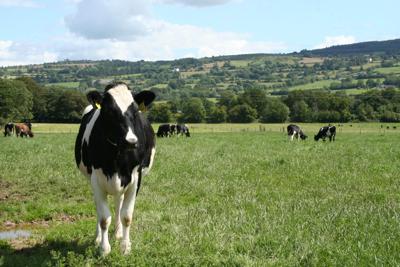 Everybody says there is no use in crying over spilled milk, but in the case of the dairy farmers of the world, preventing the milk from spilling in the first place could mean the difference between survival and failure of their family farms.

It is no secret that 2019 was an abysmal year for the dairy industry with Dean Foods declaring bankruptcy and many small dairies forced to close up shop. The dairy industry needs all the help it can get, and thanks to an up-and-coming artificial intelligence dairy company called SomaDetect, there could be less spilled milk for dairy farmers and more cash in their pockets. SomaDetect has released a system that provides automated analyses of milk quality and herd health in real time, which could aid dairymen in sustainability and disease control.

Bethany Deshpande, CEO of SomaDetect, says her father, Satish Deshpande, who has a doctoral degree in biophysics from the University of Guelph, Ontario, invented a sensor technology, and in the process he accidently discovered he could measure fat content and somatic cells in raw milk rapidly and onsite. Somatic cells in milk consist of white blood cells and epithelial cells that are shed from the udder. The sensor technology, which SomaDetect refers to as light scattering, is accomplished when light is shone through milk flowing in a milking system and images of the patterns are captured from the opposite side.

“It’s the same as when you shine a flashlight at your fingers and different light comes through your fingernails,” Bethany said. “It’s that, but in milk. Based on the images that come out, you can decipher what’s in the milk.”

SomaDetect was founded in 2016 by Bethany Deshpande, Nicholas Clermont and Bharath Sudarsan.

Bethany Deshpande says in the beginning they had no plans to start a company within the dairy industry. In fact, she had no connection to agriculture at all. Deshpande was working a full-time job and this accidental discovery her father made became a weekend project. She would knock on barn doors and ask dairy farmers questions and through the process, she began to learn about the dairy industry and developed a connection to where her food comes from.

“I didn’t grow up on a farm,” she explained. “Everything I know about dairy today I’ve learned through farmers. With the dairy industry, it blows my mind the work that goes into producing the food that goes on our table. I have this unique perspective of being one of these consumers that was completely disconnected from where their food was coming from and then going through this journey and realizing what it takes to produce food. I’m really thankful for working in agriculture and ending up in this industry even if it was accidental, because it has given me such an appreciation for all the work that goes into it.”

The power of detecting subclinical and clinical mastitis

Although the technology originally only detected somatic cell counts, termed SCC, and fat, through more research, Deshpande says it became apparent the light scattering technology could measure more, like ranges of progesterone in milk to determine reproductive status, antibiotic residuals for food safety and quality control, protein, and fat-to-protein ratios, which can cause ketosis and acidosis and SCC to indicate mastitis in both the subclinical and clinical forms.

Although the technology is not as precise as a lab machine, Bethany says it gives producers a clear sense of what might be in the milk, and because it is measured at each milking—unlike other systems and methods that only test monthly—farmers can monitor trends and they are alerted to conditions like subclinical mastitis before they become advanced.

“I often compare mastitis to the common cold in humans,” Deshpande said. “Every farmer out there has had some experience with mastitis. It costs money, it creates health challenges for the cows and no one wants to be dealing with it.”

The American Association of Bovine Practitioners says this pathogen can infect from 1 to 99% of a herd. Even with little to no symptoms in the cow, infected cows can have extremely high bacterial counts, as high as 500,000,000 colony-forming units per milliliter of milk. High SCC milk is not desirable for milk processors because it shrinks the shelf life of dairy products and reduces the quality of milk protein. Infection can be passed from cow to cow with contaminated milking equipment, so catching this affliction early is crucial for dairy farmers.

“Subclinical mastitis is a whole other beast from clinical mastitis,” Deshpande explained. “If you can catch it early, it is lower cost to treat and there are more manageable ways to treat it.”

Additionally, because dairy farmers would be alerted to diseases before they become severe infections, she hopes SomaDetect could help reduce antibiotic use in some situations.

“If you catch a disease like mastitis earlier, you could potentially rely on a therapeutic treatment and not have to go to an antibiotic, and antibiotic resistance is something that is affecting the entire livestock industry,” she said.

Technology will put dairymen in the driver’s seat

Other systems do exist and offer similar features, but the No. 1 differentiator for SomaDetect is that it does not require the use of any chemicals or reagents, meaning the milk used for measurements is unaltered and can be returned to the milking line after measurement, she said. Not only does this keep the cost of the technology down, but it is a time saver for dairy farmers.

Once the system is installed, it is relatively low cost as far as making measurements because the SomaDetect equipment fits into the existing milking line, making it cost effective for all dairy farmers.

“Ultimately what we want to do is give farmers total control over what they put in their vault so they can make the decision about what milk they ship to a processor and what milk they don’t put in that vault tank,” the CEO said. “I think farmers are facing all kinds of pressure from a lot of different parties and they absolutely deserve all the help they can get in better managing their farms. We want to help farmers with the information they need so that they can produce the best possible milk.”

These days big data rules and the more knowledge you have, the better positioned you are to make educated decisions for your farm. Although technologies like this will not be the answer for everyone, technology in general is paramount for the future of the dairy industry.

“Will it solve all their problems? No,” Deshpande said. “This is not a silver bullet, but it can absolutely be a key source of information and something that helps them have productive and sustainable farms in the long run.”