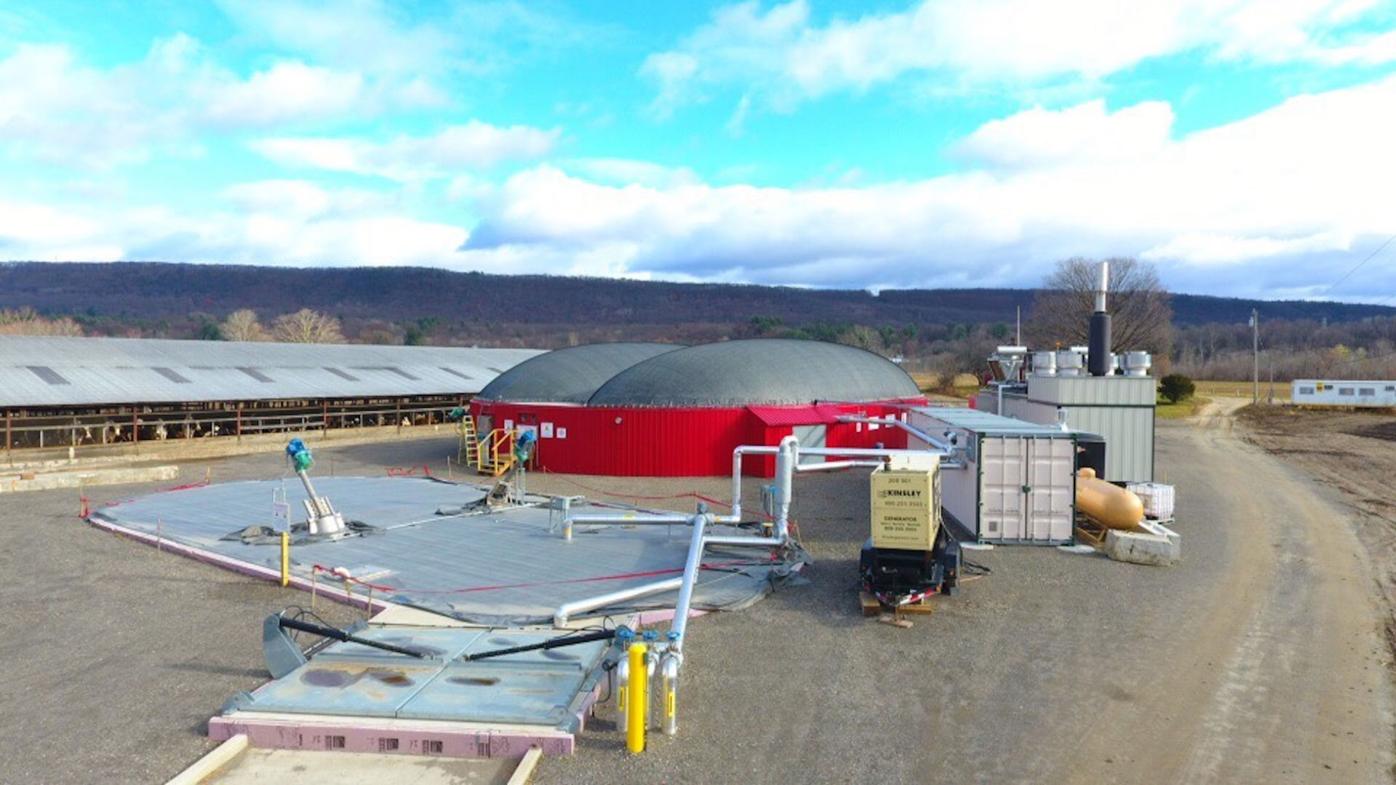 This is a view of the digester on Peter Melnik’s farm near Deerfield, Massachusetts. Construction of the anaerobic digester began in April 2016 and was completed in December 2016. The alliance between Dairy Farmers of America and Vanguard Renewables made it possible for Melnik to build and operate the digester. (Photo courtesy of Vanguard Renewables.)

This is a view of the digester on Peter Melnik’s farm near Deerfield, Massachusetts. Construction of the anaerobic digester began in April 2016 and was completed in December 2016. The alliance between Dairy Farmers of America and Vanguard Renewables made it possible for Melnik to build and operate the digester. (Photo courtesy of Vanguard Renewables.)

Peter Melnik, a fourth generation dairy farmer from Deerfield, Massachusetts, is a firm believer a farm should be economically and environmentally sustainable. This belief started him on a 10-year search for a way to make an anaerobic digester work on his farm.

“At first I thought I could build a small digester to produce enough electricity for my farm,” Melnick said. “Then the concept of food waste was introduced to me and the story just grows from there.”

The recent announcement of an alliance between Dairy Farmers of America and Vanguard Renewables, a Massachusetts-based renewable energy developer, was the missing piece of the puzzle for Melnik.

“Dairy farmers have always been great stewards of the land, but like any business farmers must continue to innovate and evolve,” said David Darr, president of farm services at DFA. “With this partnership, we hope to make anaerobic digesters more available to more farmers.”

Anaerobic digesters have been around for a long time but the money to build one and expertise to manage a digester limited their adoption. Vanguard Renewables addresses both of these limitations.

“Historically digesters have been sold to the farmers, built, then the keys were given to farmer who managed the digester,” said Bill Jorgenson, managing director of Vanguard Renewables. “Now we will help the farmer finance the cost of the digester and we will run it for him. We give them a streamlined capital process, a streamlined operational process and they can go about their business of being dairymen.”

This is exactly the kind of partnership Melnik needed to achieve his goal of having a working digester on his farm. Construction on his digester began in April 2016 and was completed in December that same year. From concept to completion, a digester project typically takes 18 months to two years.

In addition to the manure produced by the 300 cows in Melnik’s milking herd, a 90,000-gallon tanker delivers 75 tons of food waste to his farm every day. His farm is 90 miles west of Boston where there is a lot of food processing. Providing a way to dispose of these food wastes in an environmentally friendly way is one of the drivers of this system.

Jorgensen said a farmer does not have to add food waste to the digester but it does make the system more efficient. If organics are added to the digester, it will produce four times more gas per pound of input material. More product into the digester means more product out in the form of fertilizer.

“We were nutrient negative on our farm,” Melnik said. “Before the digester we were making about 3 million gallons of manure a year but now that we are adding food waste to the system we will make the equivalent of 8 to 10 million gallons a year. We will be able to meet all of our nutrient needs without buying commercial fertilizer which is a big savings for us.”

Jorgenson added that by putting manure through the anaerobic digester, it changes the nitrogen ion in the manure resulting in an enhanced fertilizer, which makes the nitrogen more accessible to the plants.

Besides wanting to be economically and environmentally sustainable, Melnik believes farmers need to get every ounce of value out of their assets. The digester on his farm is helping him meet this goal.

Most of his milk is sold into the fluid milk market but part of it goes to an ice cream manufacturer about 30 miles from his farm. Waste from the plant comes back his digester, which produces fertilizer for his crops, which are fed to the cows to make more milk. Plus the ice cream plant buys electricity off the power grid produced by the digester.

“That circle right there is how this project will make sense and be sustainable,” Melnik said.

Jorgenson said the digester’s value to the farm in terms of electricity, excess heat from the digester which can be used on the farm, solids that can be used for bedding and fertilizer is worth about $100 per cow. A digester is not, however, a silver bullet for a struggling dairy farm looking for a quick fix.

Vanguard receives a return on its invest through the sale of energy and the collection of fees for food waste disposal.

“Our investors are great believers in climate change and want to reduce greenhouse gasses and produce more food,” Jorgenson said.

Darr said two DFA members in Massachusetts have working digesters on their farms and eight to 10 other members across the country are developing their business plans for a digester.