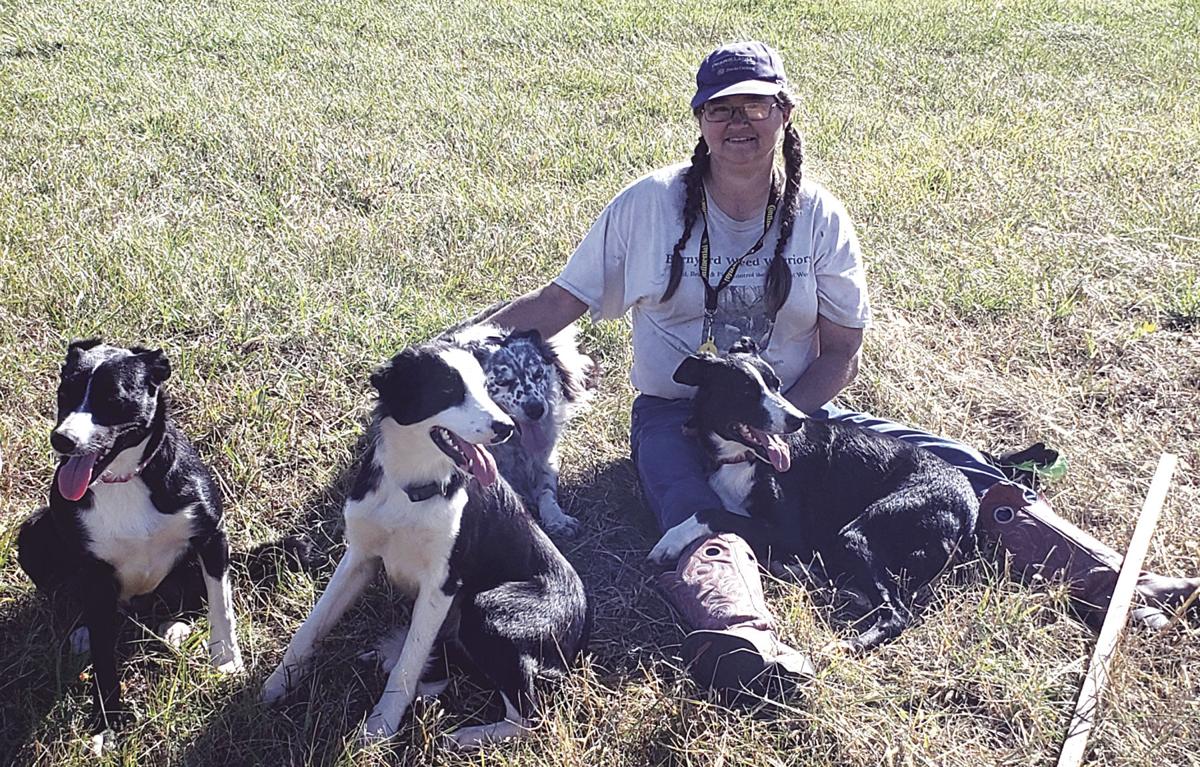 Mary Powell of Longton, Kansas, started Barnyard Weed Warriors, her rent-a-goat business, in 2016. She uses her 75-head goat herd as a means of regenerative agriculture across the Kansas prairie. (Photo courtesy of Penny McGlachlin.) 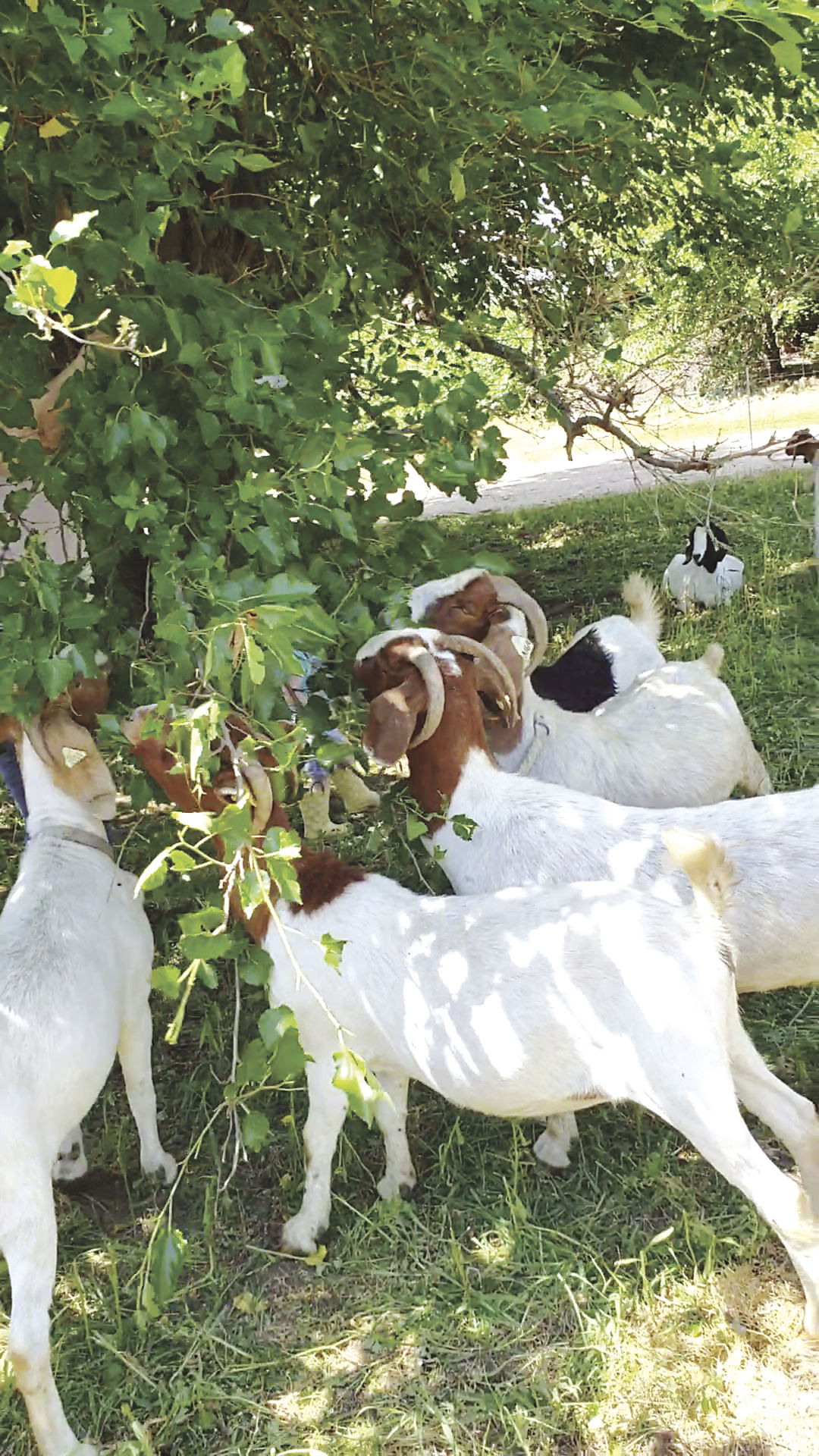 Although often thought of as the most mischievous animals in the barn yard, goats are making their mark these days with their unique taste in vegetation, athletic abilities and willingness to go where nothing else will go. Goat brush eating businesses are becoming more popular and making waves as a means of sustainable regenerative agriculture.

Mary Powell of Longton, Kansas, has been in agriculture her entire life, but after 27 years of working with cattle, an injury on the job effectively ended her cowgirl career. In 2012, she began a new career with goats, which according to Powell, are the poor man’s cattle.

However, once she started raising goats, they became overrun with parasites, a common issue for these ruminants. Then in 2016, after taking a cue from other goat owners, Powell decided to start a rent-a-goat grazing business, called Barnyard Weed Warriors, to put her goats to work and solve the parasite conundrum.

“I basically started the goat business because I had a worm issue that I could not get control of,” Powell said. “We went from having 50,000 to 60,000 eggs per fecal sample down to four eggs per sample, all from grazing in new place and eating noxious weeds.”

Powell travels the state of Kansas with a herd of 75 goats ready to clean up the pastures of the Sunflower State. Her goats are Boer and Kiko crosses, a mixture or hardiness, low maintenance and meat quality.

“I have found that the Kiko-Boers do really well out in the brush,” she said. “The Boer bloodlines seem to be a little more worm resistant too.”

Powell says her goats have grazed landscapes from Hays to Atchison to Cherryvale and all the way to Medicine Lodge. Her largest projects are 5 to 10 acres and the goats eat about a half-acre of vegetation a day. To focus the goats on specific areas of grazing, Powell sets up temporary electro netting fences to keep them in rotational grazing paddocks. Goats have a reputation of being escape artists, so she says the netting fence is a must.

While the goats are grazing, Powell sets up a campsite and stays by her flock like a dutiful shepherd while they safely graze. She also uses two Border Collies to help gather the goats and watch over the herd. Powell says she has customers of all kinds, including farmers, ranchers, cities and towns. Her goats have cleaned up pastures, parks, highway medians and junkyards.

“Goats are the answer because they don’t cause any chemical runoff, the goat berries they leave behind are easily broken down and carry nitrogen to the soil and it’s all organic. They are a great way to manage the land.” —Mary Powell

Powell says goats will eat poison ivy, poison oak, honey suckle, kochia, dandelions, buckbrush, kudzu, dogwood, sumac and bindweed. Just about the only weed they leave in the pasture is cocklebur. Additionally, goats will strip bark and kill young trees like elm, oak, locust, hedge and even cedars if it is the right time of year. Powell says the weed most of her customers want to eradicate is Sericea lespedeza or Chinese bushclover. She says although most recommend late fall burns, she recommends goats grazing it down.

“Previously we’ve kept it grazed down until it doesn’t seed out anymore,” she said. “This has broken the cycle so that it doesn’t spread 1,500 seeds per plant.”

Additionally, Chinese bushclover is a natural de-wormer for goats because of the tannins within the plant. Powell says using goats to clean up brush and overgrown vegetation is low impact on the soil and has a positive impact on pastureland because what goats graze down, leaves more room for grass to grow for cattle to utilize.

“Even though goats have a notorious reputation for destroying things, if you keep a herd of goats in a pasture with your cattle, they will eventually kill out all the bad stuff in the pastures,” Powell said.

She says her goats rarely eat prairie grass; they will eat all the other weeds first. Goats seem to enjoy the challenge of tall vegetation and they can clear weeds that are up to 7-feet tall. Goats are great at clearing out hedge rows, areas subject to runoff, waterways and banks of creeks.

“Goats are the answer because they don’t cause any chemical runoff, the goat berries they leave behind are easily broken down and carry nitrogen to the soil and it’s all organic,” she said. “They are a great way to manage the land.”

Barnyard Weed Warriors is growing so quickly, Powell is teaming up with other goat owners because she has so many jobs stretching across the state. Powell says the rent-a-goat industry as a whole is flourishing as well. No matter where you live, there is probably a rent-a-goat service available to you. Powell says rent-a-goat businesses can be found across the United States on www.hiregoats.com, and some businesses even have successful franchises. Powell says the largest company has about 4,000 to 5,000 goats. In 2016, a rent-a-goat company was even featured on the hit show, Shark Tank, looking for an investment.

“Everybody laughed at me when I first wanted to do this, even my banker laughed,” Powell said.

However, the weed business is lucrative, especially when it involves goats. Powell says she charges a flat day rate to graze her goats.

Goats are proving themselves to be the Greatest Of All Time, or the G.O.A.T., when it comes to eating weeds and brush. Their specific skills have made them champions of the regenerative agriculture movement.

“Goats are the best solution to keep vegetation down, they are the original weed eater,” Powell said. “God created them and their bad tendencies, but you can channel their abilities to eat junk, which is what their digestive system prefers.”