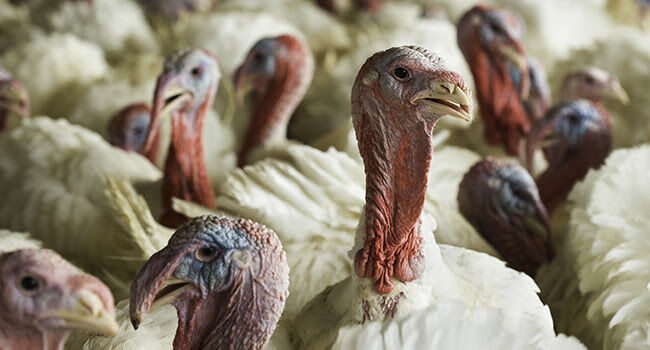 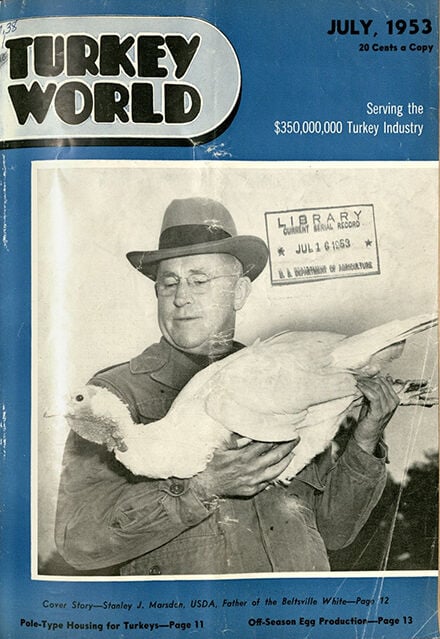 Stanley J. Marsden pictured on cover of July 1953 issue of the trade journal, Turkey World. He is described as the "Father of the Beltsville White." (Courtesy photo.)

Turkeys get top billing this time of year. From the silver screen to the White House to your dinner table, everyone wants to talk turkey. And while these famous birds have been integral to our Thanksgiving holiday for generations, our desires for different types of turkeys have been ever changing.

Take the Beltsville Small White Turkey, for example. According to historian Andrew F. Smith, “the bronze turkey breed was the most popular in the United States during the 19th and early 20th centuries. Its large size, hardiness, and the coloring of its feathers made it popular at the market, where it demanded the highest prices.”

But in the 1930s, consumers expressed a growing desire for smaller turkeys (8 to 15 pounds) that would better fit their home refrigerators and ovens, and would adequately feed a small family without excess waste. In addition, they wanted a turkey that had more white meat. At the same time, ARS poultry scientists working in the then-named USDA Beltsville Research Center were collaborating with the turkey industry to breed a new turkey to meet the emerging consumer demand.

After achieving two decades of success, the 1970s started to come into view, and with it a shift in consumer demand for larger turkeys. Specifically, commercial food processors were looking for larger-breasted turkeys and producers wanted larger-sized flocks. Consequently, the Beltsville Small White turkey began a steady decline in popularity.

The Livestock Conservancy observes, "Today the Beltsville Small White is quite rare and kept by few exhibition breeders. A research flock exists at the Iowa State University; however, public access to this flock is almost non-existent. In recent years there has been a revival of interest in this variety. Efforts are underway to locate and conserve any remnant flocks in the United States and Canada."