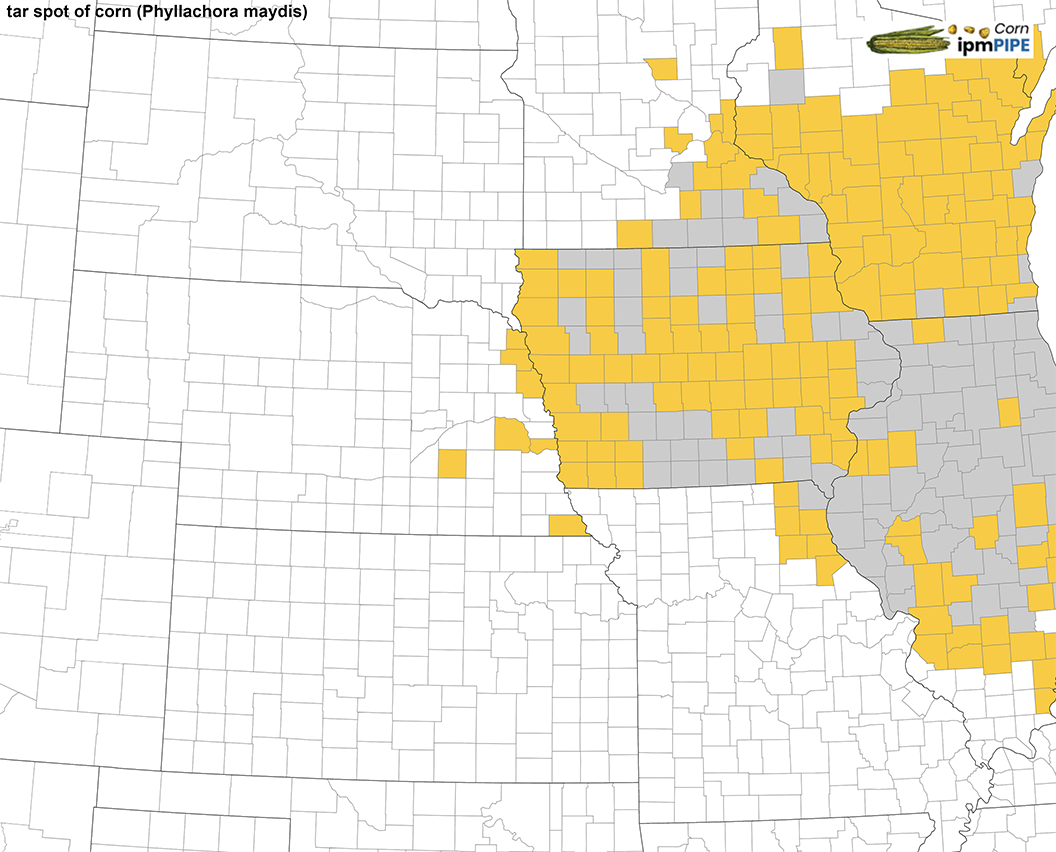 Tar spot disease of corn has been confirmed on samples from corn fields in several eastern Nebraska counties.

Tar spot, caused by Phyllachora maydis, was confirmed in several eastern Nebraska counties during recent weeks. Tar spot initially developed in western Iowa in September 2019, but was seemingly inactive since then when conditions were dry. However, with the development of rain showers in the region, colleagues from Iowa State University were able to confirm active tar spot in all of the westernmost counties of Iowa along the Missouri River during recent weeks.

During a collaborative survey trip through northeast Nebraska, we identified tar spot in corn fields in Dakota, Thurston and Burt counties, indicating that the fungus causing tar spot has moved into Nebraska. Disease could be found in every field where we stopped that week—albeit at very low severity and incidence, making it difficult to find the tiny black “dots” on leaves. However, it was often easier to see them on the few remaining green leaves than on brown, senesced leaves.

Also complicating the search for tar spot was the presence of rust diseases on leaves—especially southern rust, which was common in 2021 (and other years). Since then, samples with tar spot have been submitted from other counties in eastern Nebraska, including Richardson County in the extreme southeast corner of the state, and from as far west as York County. There are likely additional corn fields in other counties where the disease can be found.

Tar spot was first reported in the Midwest United States in 2015. Since then the disease has continued to spread through the Corn Belt. Often, the disease develops late season during cool, damp conditions in the fall and causes little damage. However, early and severe tar spot has reportedly caused yield loss of up to 25% to 30% in some Midwestern fields.

The disease was first identified in Mexico in 1904 and has been a problem in other Latin American countries, where it is caused by a complex of multiple fungi and has impacted grain production, causing yield losses of 11% to 46%. The disease can also impact quality of other corn products, including silage, stover and husks.