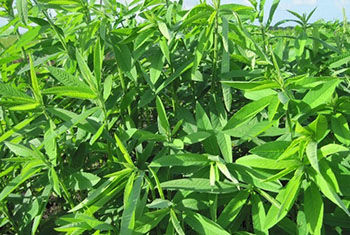 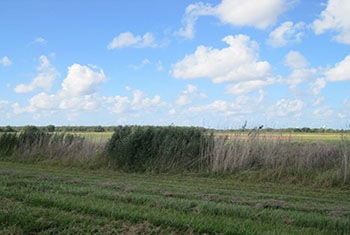 There are nearly 500,000 acres of sugarcane production in southern Louisiana. The production of sugarcane runs on 4-year cycles, and each sugarcane field may remain fallow (empty) for up to a year before a new crop is planted. Cover crops provide an opportunity to control soil erosion, improve soil quality, and suppress weeds on fallowed sugarcane fields.

Sunn hemp (Crotalaria juncea) has been used to provide organic matter and nitrogen to subsequent sugarcane crops. It grows on a range of soil types and conditions and has the additional benefit of being resistant to root-knot nematodes, Meloidogyne spp. While sunn hemp may provide numerous agronomic and environmental benefits, these benefits are not fully achieved unless the best adapted cultivar is known and planted that meets the objective of the sugarcane producer.

To determine the adaptation and productivity of sunn hemp (Crotolaria juncea) sources in southern Louisiana, the USDA-NRCS Golden Meadow Plant Materials Center near Galliano, Louisiana, evaluated commercially available sunn hemp cultivars consisting of ‘Tropic Sun’ (a release of the Hoolehua, Hawaii, Plant Materials Center) ‘AU Golden’ and a common (unnamed) source of sunn hemp, along with red hemp (Crotalaria ochroleuca), in a comparative evaluation trial at the PMC from 2015 to 2017.

AU Golden reached maturity (50% bloom) approximately 2 months earlier than the other sources in each year of the evaluations. The other sunn hemp sources reached maturity about 5 months after planting. Tropic Sun and the common source produced biomass in excess 14 tons per acre when harvested at 50% bloom. AU Golden produced over 3 tons per acre. Unusual rainfall in 2016 and 2017 created saturated soil conditions, resulting in low productivity of all sunn hemp sources, but red hemp tolerated saturated conditions and produced biomass in excess of 5 tons/acre.

Sunn hemp and red hemp have an important place as a cover crop in sugarcane rotations. All three sources of sunn hemp provide quick cover under typical soil conditions, with Tropic Sun and the unnamed source outproducing AU Golden by over 4 times. Producers can decide which source of sunn hemp to use and how long to let it grow before termination depending on how much biomass they want to produce. Sunn hemp does not do well on wet soils though, and red hemp shows more promise to produce an adequate amount of biomass.

For more information on the results of this trial visit https://www.nrcs.usda.gov/Internet/FSE_PLANTMATERIALS/publications/lapmcsr13500.pdf.