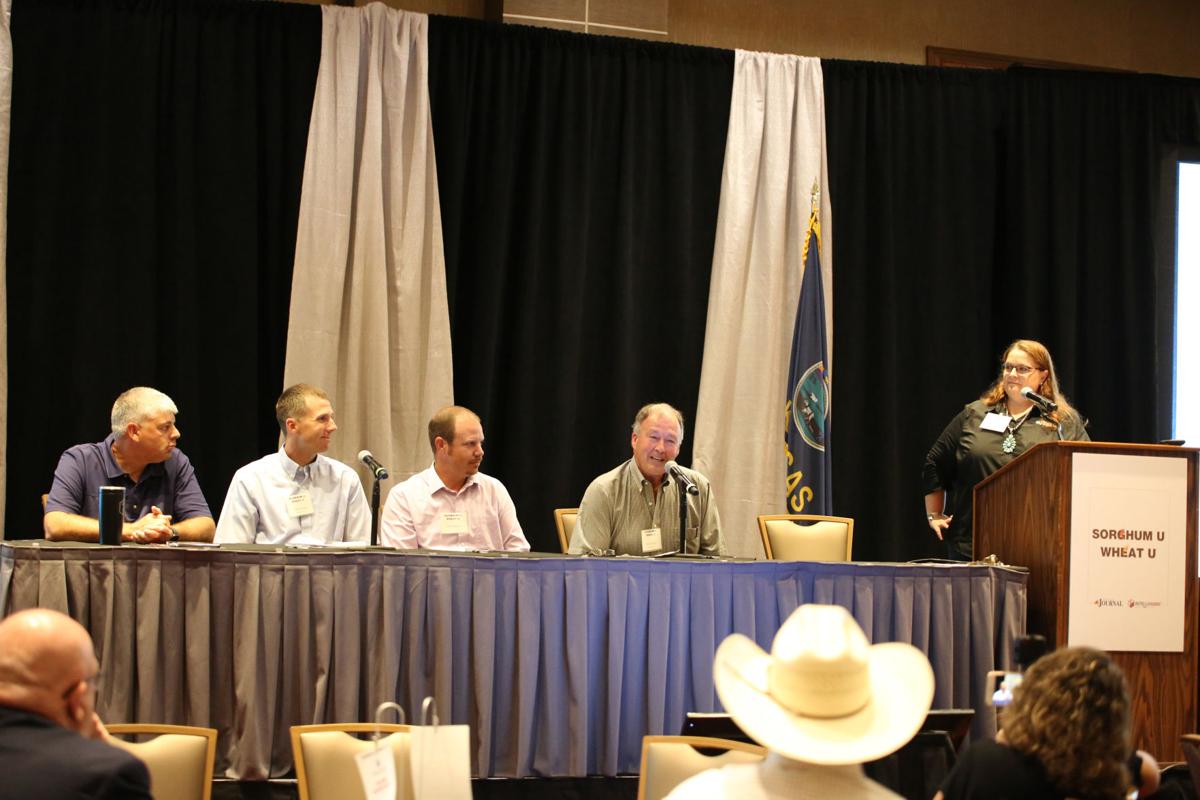 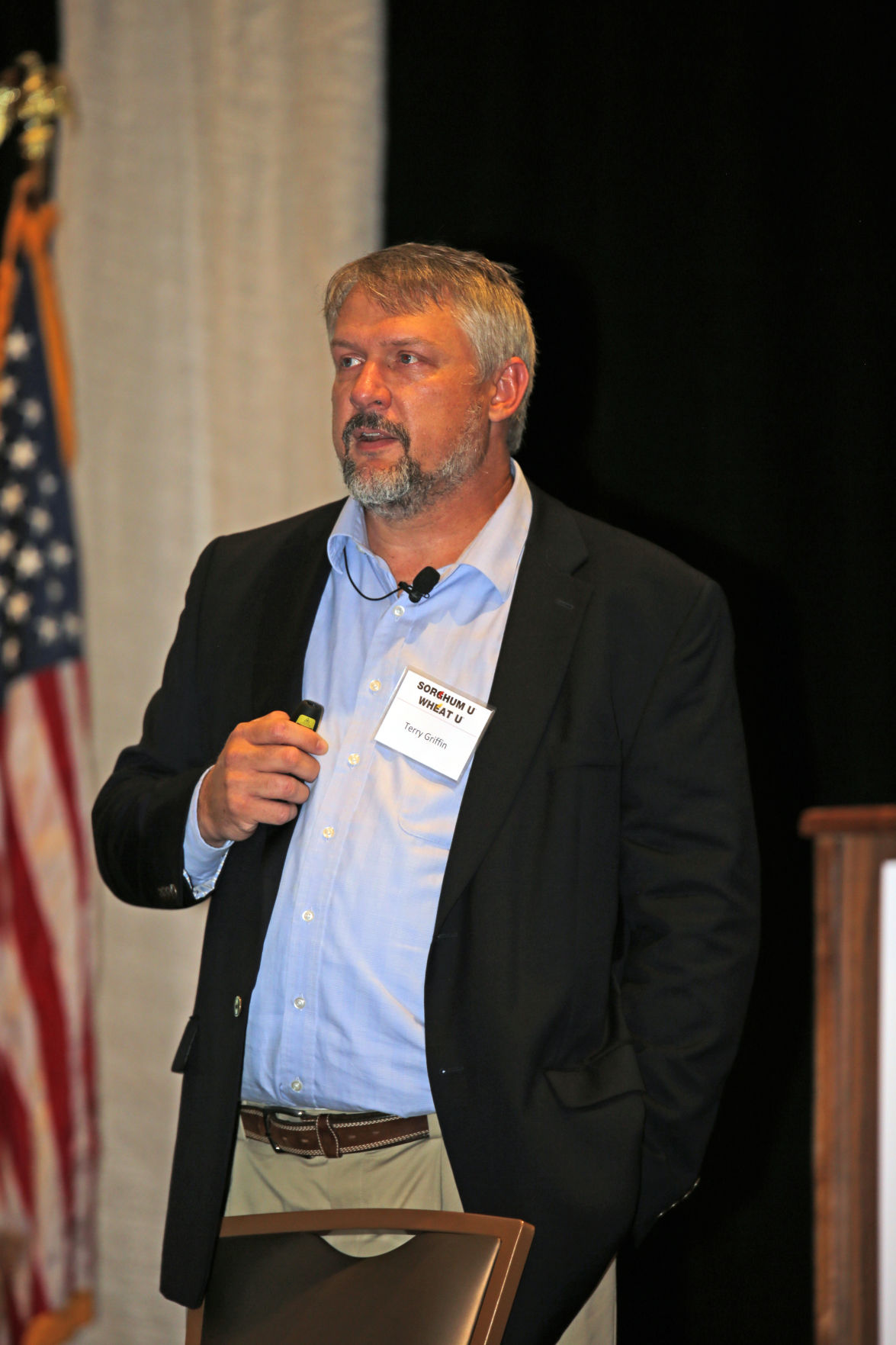 Terry Griffin, associate professor in Kansas State University's Department of Agricultural Economics, spoke during his session, "Making 'cents' of Blockchain Technology," at the Aug. 14 Sorghum U/Wheat U event at Mulvane, Kansas. Griffin’s Research and Extension programs have been focused on “big data” and how it might help farmers capture more value from their efforts. (Journal photo by Kylene Scott.) 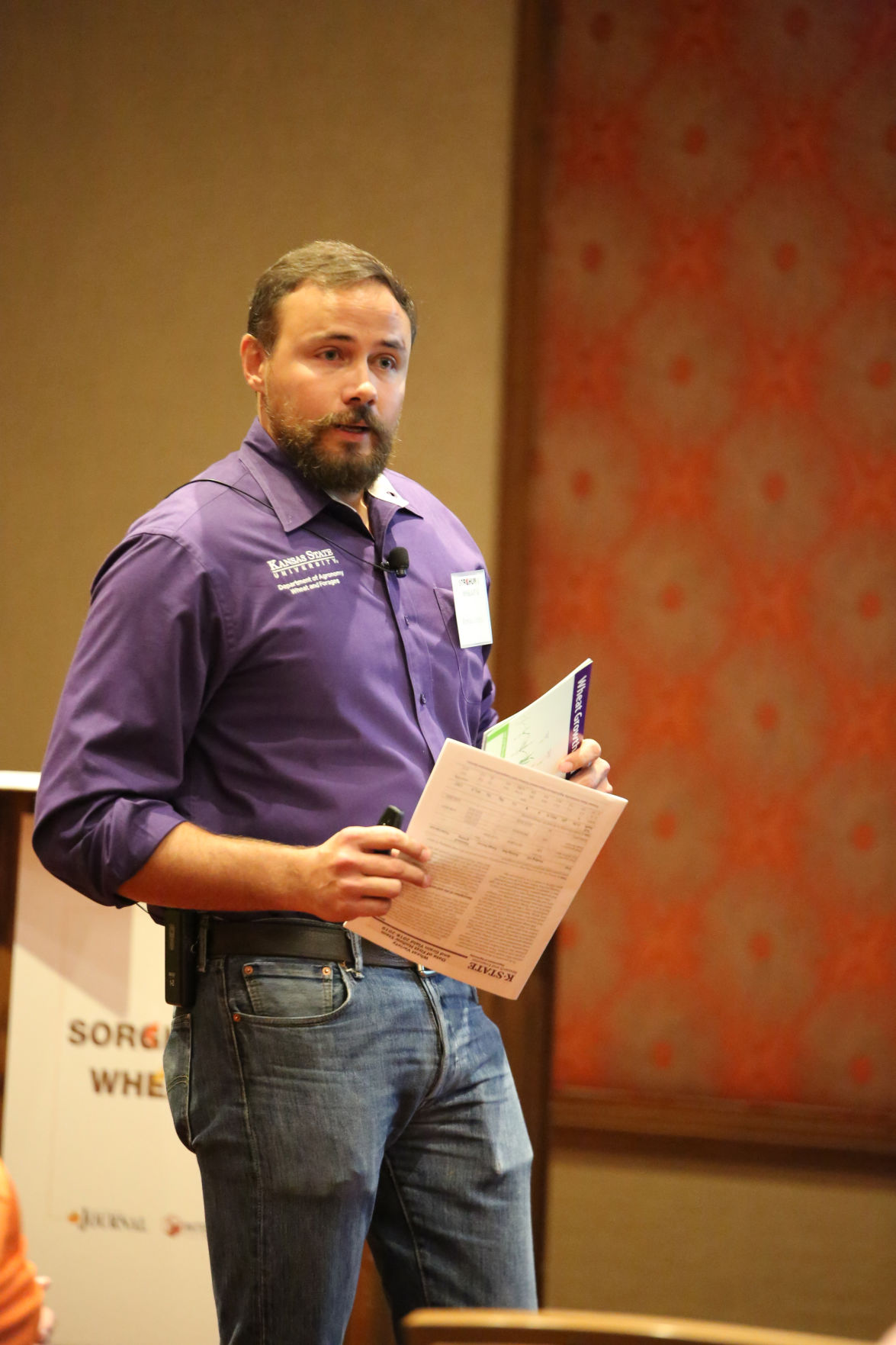 Romulo Lollato, assistant professor, wheat and forages, Kansas State University, was a featured speaker Aug. 14 at Sorghum U/Wheat U in Mulvane, Kansas. Lollato gave wheat producers information on how to use lessons of the past to help their future crops. (Journal photo by Kylene Scott.)

Attendees at the first combined Sorghum U/Wheat U event at the Kansas Star Event Center in Mulvane, Kansas, were the big winners Aug. 14. Sorghum U/Wheat U was sponsored by High Plains Journal and IntelliFarms.

Breakout sessions throughout the day gave producers an opportunity to dive into wheat subjects, sorghum subjects or both.

Terry Griffin, associate professor in the Department of Agricultural Economics at Kansas State University was one of the breakout speakers, and helped growers make “cents” of block chain technology.

“When we talk about blockchain, and when I write about it in academic terms, it’s distributed ledger technology,” Griffin said.

Blockchain can be akin to a paper ledger with scribbles and marks to define change points in the production or economic status. Instead of being paper and pencil, it’s now electronic.

“So whenever time there’s a transaction, whether it’s financial or chain of custody for grain or farm data, there is a record of who did what, and when, to the grain or to the data,” Griffin said. “Blockchain is a digital distributed ledger technology.”

It’s not a perfect system, as there’s security and validity of data concerns, and as always in rural areas, internet connectivity tends to be an issue. When collecting data in a combine, for example, the connection needs to be wireless.

“When we’re applying a blockchain technology to data quality, in particular yield monitor data, or as applied data from my applicators, well, we need to have the combine connected to the internet during the calibration process, to build the blockchain around that particular data set,” Griffin said.

As the data is being collected, especially when there’s modifications that need to be made, an internet connection is crucial for the updates to be feasible.

Another session speaker, Romulo Lollato, Kansas State University Extension wheat specialist, said wheat farmers have had their work cut out for them.

“Definitely, it was a very challenging year,” Lollato said. “I mean, from the beginning of the growing season, we had a lot of rainfall. Parts of the state getting as much as 10 to 11 inches of rainfall during the month of October or more, if we count November. Up to 20 inches depending on where in the state. So very, very challenging year to get started.”

And the challenges at the beginning caused two very different crops—an early planted one and a very late planted one. The early crop initially looked very good through the winter and had great yield potential. Meanwhile the later crop was doomed from the get-go. And it was all dependent upon what part of the state a grower was in.

“Definitely huge differences there and that was true all the way into the end of the season,” he said.

There was also another layer on the issues on top of delayed planting—whether the crop was in the central part of the state or western Kansas.

“The central Kansas crop was just too many things going on,” Lollato said. “There were parts of south central Kansas that during the growing season got 60 plus inches of rainfall during the season. An excessive amount of moisture.”

Central parts of the state had issues with waterlogging, causing a lot of variability between fields, along with some hail damage and weed pressure. At harvest Lollato had reports of some farmers harvesting 60 bushels per acre in one field, and “across the road” 20 bushels per acre.

It was a “very, very variable crop in the central part of the state,” while the western parts had nearly perfect conditions.

Those farmers who managed their wheat accordingly had some fields go above 100 bushels per acre.

“It was good, almost near perfect weather conditions here in western Kansas,” Lollato said. “Very long and nice grain filling period, similar to what we had in 2016 in a different way, but it’s still similar, right.”

“So with these two very different crops, that gives us the chance to take a look at how these varieties are performing across the state,” Lollato said.

He also advised now that planting season is near—about a month or so out—to be mindful of a few things. First variety selection.

Two more things that should be on producer’s minds. One for those in western Kansas—is volunteer wheat control. A few years ago there was a widespread infestation of wheat streak mosaic, and “we don’t want to repeat that,” Lollato said.

“So make sure to control the volunteer wheat. Just make sure that it’s at least a couple weeks before you are planting our your wheat crop and try to convince your neighbor to do that as well,” he said.

For those in central Kansas, there was a lot of head scab in last year and that’s going to have an affect on the quality of seed going into planting.

“Make sure that you have a good quality seed going in. Heavy test weight seed going in—especially important this year,” Lollato said. “And if saving seed, and you had scab last year, consider a fungicide see treatment as well.”

Watch for continued coverage from Sorghum U/Wheat U in upcoming issues of High Plains Journal or online at www.hpj.com.