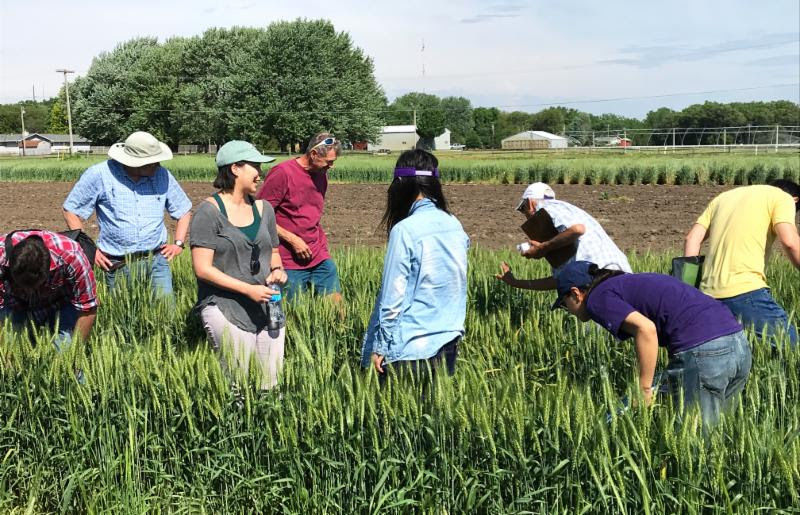 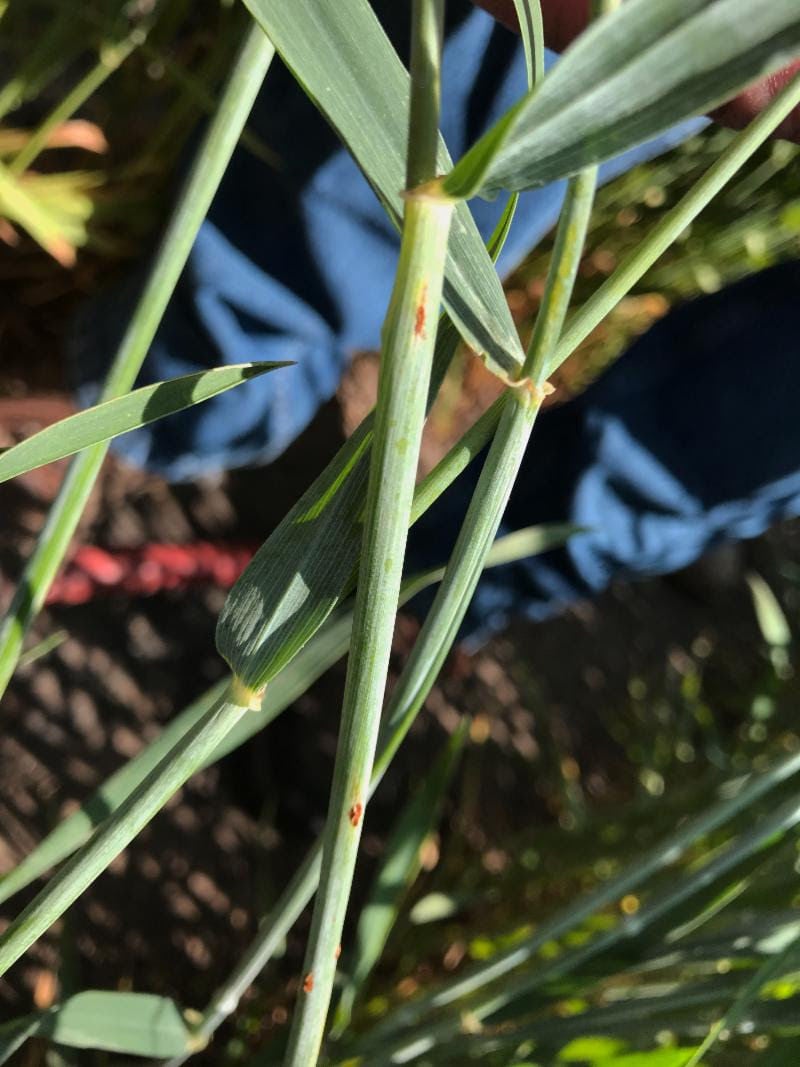 The Rocky Ford Experiment Station in Manhattan, Kansas, grows novel genetic materials for wheat improvement year after year for farmers, wheat breeders, researchers and others in the wheat industry. The goal of the station is to be a starting point for wheat breeders and researchers to find new genes that are available to put into wheat varieties of the future. The various genes they are looking for include resistance to different insects, diseases and drought.

Along with these genetic materials, it also grows wild collections unique to the wheat breeding world. For instance, there are 23 different wheat species in the plots—all of which have been collected from different points in the world.

The station is separated into different plots grown and researched by scientists with the Wheat Genetics Resource Center and Kansas State University.

Bhanu Kalia, research associate at K-State, has a plot at the station dedicated to leaf rust. Kalia transferred adult plant resistance (non-race specific) to leaf rust goatgrass to spring wheat to be transferred to winter wheat. The goal is to develop durable, long lasting resistance. Bikram S. Gill, director emeritus of the WGRC and honorary distinguished professor of plant pathology at K-State, says this is a new area of research for exploiting wild wheat for durable control of leaf rust.

There is also a section dedicated to wheat relatives, or wild wheats. Unlike most plants, wheat genetics material is composed of three core sets—the A genome, B genome and D genome. Here, they grow Aegilops tauschii, which is the D genome donor of wheat and better known as the father of wheat. Although it may not look like wheat, it is very closely related, which is why it works well within the core set of the genomes.

"The D Genome has a wealth of genetic variation for disease resistance, pest resistance and drought resistance. The transferring of resistance genes into wheat can be done more efficiently with tauschii being so closely related," Duane Wilson, associate scientist with K-State, said.

The next part of the wheat relatives observed in the plot are the tetraploid wheat, which is the mother of wheat. This selected tetraploid core set represents both the A and B genome in this plot. Wilson says this species' genes are also easily transferred into bread wheat, which is why they are screening them for resistance.

Jon Raupp, senior scientist with the Wheat Genetics Resource Center, has a plot with wild wheat species. Within this plot, researchers screen the different species for traits, but also use them as a demonstration to show the relationship between different genomes that are related to the wheat plant. There are various Aegilops and Triticum species, making the plot a nice show and tell.

"It's educational for students because they learn to identify these species. It's also valuable to the collection here (at the WGRC) because we can see the disease and insect problems when those plants are exposed, and then Duane takes notes to see which lines are good," Gill said.

"A germplasm release is a wheat line that has a gene[s] of resistance that we've released for breeders to use to improve wheat, not just in Kansas, but across the Great Plains and around the world," Wilson said.

The single-row plots are made up of selected lines from the germplasm releases. Wilson said some improvement was needed on the lines because they weren't as breeder-friendly as they liked.

Researchers selected heads last year from the five row plots, planted them in the single rows, and after note-taking and evaluation, they have found some they'll discard but also some in much better standing than before.

This process will help improve what they pass on to breeders so they'll have a better start when beginning a new variety.

Mark Davis, senior scientist at K-State, has a plot at the station to learn about Barley Yellow Dwarf and tan spot diseases in the field. These plots are inoculated with disease pathogens for researchers to see how they affect the plant, such as which plants handle the diseases better.

Bob Bowden, supervisory research plant pathologist with the USDA Agriculture Research Service and adjunct professor at K-State, is researching stem rust he's inoculated into a plot. There is a relatively new fungus called UG99, which is overcoming resistance genes used to protect the crop from stem rust. Bowden is evaluating this fungus all over the Great Plains to look for new sources of resistance. Bowden said that typically stem rust is not an issue in the United States as it has been well controlled.

Next to the stem rust plot is a Fusarium head blight/scab nursery with genetic material developed by Bernd Friebe and Gill. In the plot, there is a group of wheats with the gene Fhb6 providing resistance to Fusarium Head Blight, which Gill and Friebe transferred from a perennial species.

"This process is more difficult because they're a little farther removed from wheat and so it takes a few more techniques in the laboratory to get that gene transferred," said Gill.

The Fh6 gene was transferred into some varieties known to be Fusarium resistant, like Kansas Wheat Alliance's variety, Everest. The goal is to add to that resistance. They also transferred Fhb6 into South Dakota wheat and a Nebraska wheat growing in the plot. Observations have been taken on the various wheats to find the ones with the best resistance, and those varieties will be used for another evaluation next year. After next year, they will give their final selection to breeders.

Finally, there is a head scab nursery that is run by Dr. Mark Davis and Dr. Erik De Wolf. Gill said that because of the devastation the disease causes, there are breeders, along with public and private companies throughout the Great Plains, that donate their wheat lines to the nursery to have them evaluated.

"It's probably the top-notch Fusarium nursery in the country because [Davis] puts so much effort into producing good spores and having the spores there, and ready to infect the plants at the time they need to be, and that's critical," Wilson said.

Each plot and nursery at the station is designed with common end goals. They are helping breeders incorporate these genes into new breeding lines. This ultimately benefits farmers because the final lines will enhance quality, raise yield, reduce spraying and have additional advantages.

Kansas Wheat Alliance provides funding to the WGRC NSF Center and in turn, benefits from a nursery like this in more ways than one. Not only are some of the varieties, like Everest, tested on diseases to make improvements, but Kansas Wheat Alliance also gets to market the end results of wheat varieties developed by K-State breeders that have been proven to be high-performing.

Daryl Strouts, CEO of Kansas Wheat Alliance, says, "K-State wheat breeders get early access to these wheat lines for their breeding programs. After they are developed into varieties, KWA can release them. We are helping to be the bridge between producers and breeders."

In the months leading up to harvest, many producers, seed dealers and researchers within the wheat industry add one or two plot tours to their…