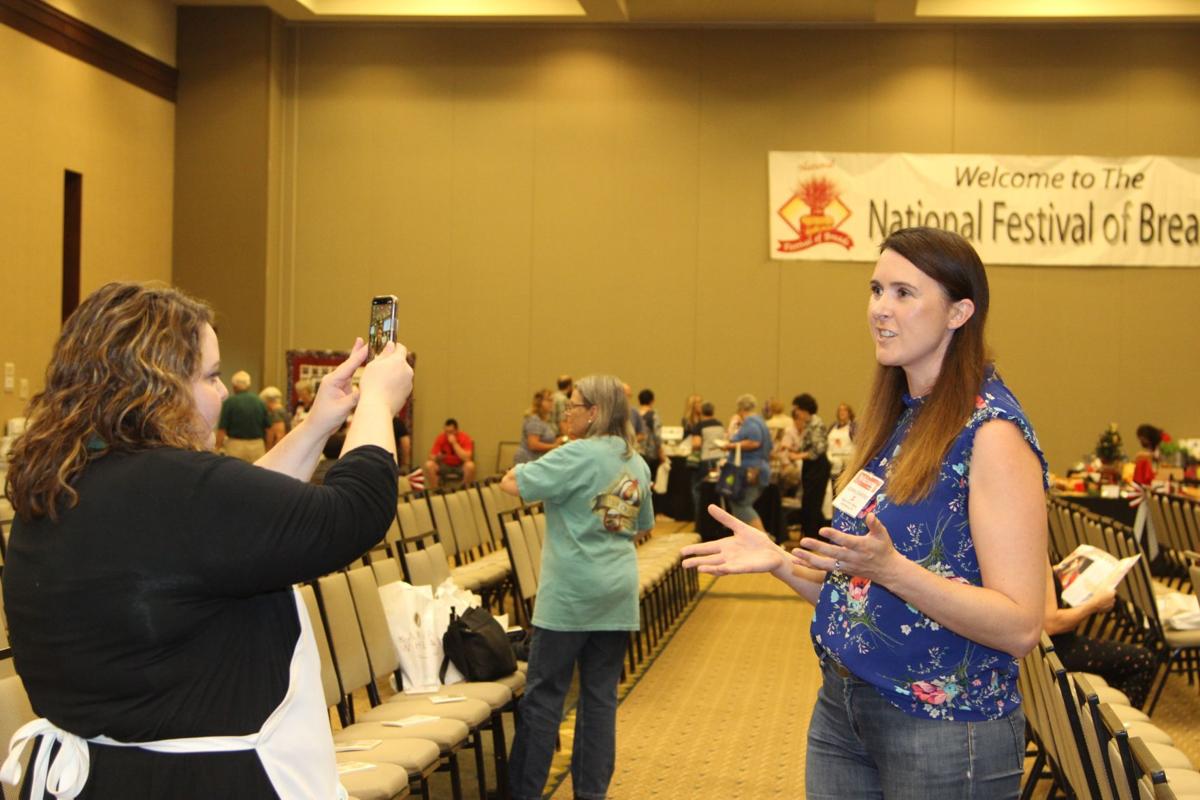 Chef Gemma Stafford (right) of “Bigger Bolder Baking” fame has over 5 million followers on social media. She enjoyed the National Festival of Breads and sharing Kansas wheat farmers’ passion for their crop with her followers. (Journal photo by Jennifer M. Latzke.) 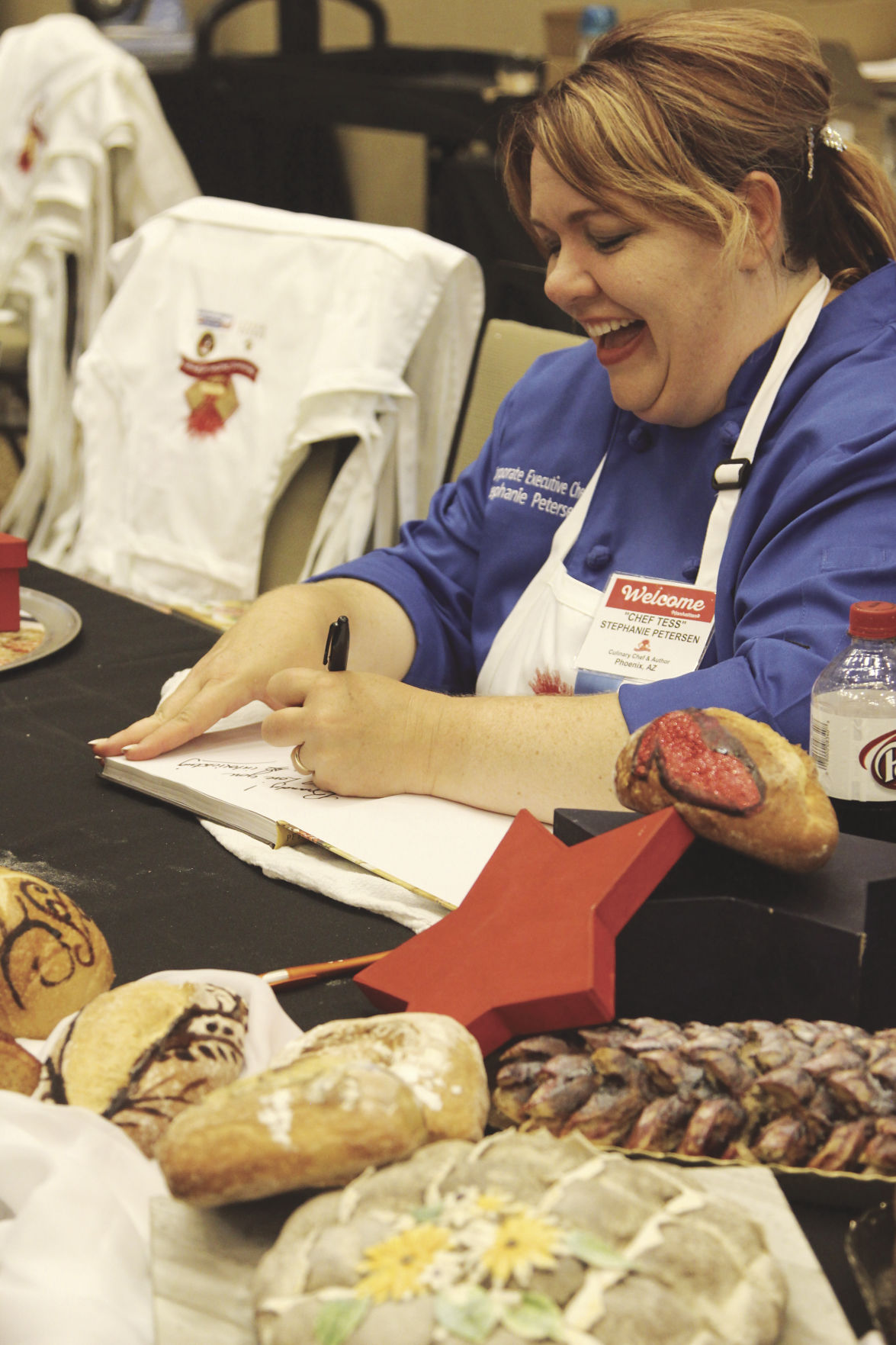 There was a time when passing out recipe booklets and samples at the grocery store were the height of reaching a consumer audience. Back when housewives physically wandered the aisles with their coupons and their lists, doing the daily shopping, it was easy for farmers and ranchers to reach them with their pitches about their commodities.

Meal delivery services, a rise in dining out, even the ability to order groceries online and have them delivered to your car are all taking the consumer out of the grocery store. Today the tactics of checkoff organizations, tasked with research, education, marketing and promotion on behalf of their farmers, have to take on a new dimension to reach the buying public.

The rise of the influencer

It might seem like everyone has a food blog these days and you wouldn’t be entirely wrong. It really doesn’t take much to get started—a camera, a recipe and a dream. But it does take considerable time and talent to keep audiences engaged and following along. BuzzFeed’s “Tasty,” for example, started out as simple videos of recipe preparations, and has grown into a Facebook juggernaut with 97 million followers. Ree “Pioneer Woman” Drummond has grown from a simple food blog into a multimedia cooking empire.

“Online food influencers are far more reachable than TV personalities and branded content,” according to its research. “They can respond directly to comments and the often DIY-style nature of their content can give a much more personable feel. Their ‘real-ness’ is what makes them appealing to their many followers who take inspiration from them.”

Brandwatch found that authors skewed 76% female, 21% male, and many used the words “mom” or “wife” in their bios. They also used keywords in their bios like “healthy,” “foodie,” and “photographer.” These are the audiences that farm groups need to reach and bloggers are the key.

“We brought a group of food bloggers into Kansas last wheat harvest to experience the essential American wheat harvest,” explained Jordan Hildebrand, program assistant with Kansas Wheat. These influencers with thousands of followers were able to meet wheat farmers, tour fields, and get information from the source about their key ingredient, flour.

It was such a success, that Kansas Wheat chose to offer a separate category in the 2019 National Festival of Breads for food bloggers, Hildebrand explained.

“It was a natural fit,” she said. “One, they love food. Two, they’re good at making food. Three, they have developed a relationship with people who regularly and routinely follow them. And so, they’ve built up a trust over years of developing recipes and staying in touch with their readers.” These food blogger candidates are able to take ownership in the festival and not only share the story of home baking, but the story of the American farmer with the readers who trust them, Hildebrand added.

Along with blogger contestants, Kansas Wheat also reached out to food bloggers to provide on-site coverage of the festival to their followers, and as speakers this year.

Chef Gemma Stafford of “Bigger Bolder Baking” fame has over 5 million followers on social media. She came out to Manhattan, Kansas, for the National Festival of Breads because she wanted to share Kansas wheat farmers’ passion for their crop with her followers.

“These people are my people,” Stafford said of the Kansas farmers she met. “You adore food. You’re very warm and welcoming. I’m always telling my fans to buy good quality. Well, it’s easy to say that but what does it mean? It means being an educated, being a smart consumer. Knowing the history behind your food and where it’s coming from.” From providing Facebook Live spots during the festival to writing honestly about her experiences touring Kansas farms and flour mills, she was able to connect farmers to her fans.

Stephanie Petersen is another food blogger who came to the Festival to share her passion for bread with festival-goers. Petersen blogs as “Chef Tess Bakeresse” from her home in Phoenix, Arizona. Her specialty is bread shaping and she has four cookbooks under her belt and has hosted radio and TV baking shows.

Petersen not only demonstrated bread shaping on the main stage at the festival, and served as a judge, but she also came on the pre-festival tour with the contestants and shared her experiences honestly on her Facebook page.

Those points of contact all amounted to a lot of connections that provided real value to farmers.

Making the most of farmer dollars

With commodity prices being what they are, it’s more important than ever that groups like Kansas Wheat stretch checkoff dollars.

“It expands the audience for our message beyond Kansas and to followers who number in the millions,” Hildebrand said. “And, we’re making efficient use of farmer dollars.” Instead of spending millions on an ad that may or may not be seen on TV by a viewer who can pause and fast forward through live TV, Kansas Wheat can analyze how many people actually laid eyes on the content of a blogger who’s become a trusted brand for consumers.

Marsha Boswell, director of communications for Kansas Wheat, said the organization is still crunching the numbers of impressions from National Festival of Breads. But, the bloggers who toured during the 2018 wheat harvest had 5.4 million total followers at that time.

“We had thousands of people watching their Instagram stories from the field,” she said. “We can’t take every single individual person out to a wheat field. But if we can take someone with a following online to that field, they can share that story and that helps us expand our message to their followers.”

And that content stays online and can be searched by consumers far longer than a recipe booklet on a shelf.

“There’s still a place for recipe books, at the (Kansas) State Fair people love getting those tangible items on their shelf,” Hildebrand said. “But, we print off a couple thousand copies. Those recipes we put online can reach thousands, even millions of consumers if the recipe goes viral.”

Reaching out to food bloggers and influencers is a two-way street, though. A blogger who spends years building trust with their audience is looking for trustworthy sources of information. To that point, farmers are under scrutiny online more and more every day, from their Twitter feeds to their Facebook likes, a blogger is not going to risk tying their brand to people who don’t align with their values.

“Farmers have to be ‘on’ all the time, we don’t get to have an off day,” Hildebrand said. “If you post one rogue tweet on Twitter, it can bite you. It may not be tomorrow, or next week, it could be years later. It’s a hard mind shift to get around but consumers are looking for it. You’re always ‘on.’” Consumers who care about their food ingredients care about the people who raise those ingredients.

“Wheat is a commodity, but it’s also a core food ingredient,” she said. And with the rise of the Internet there is more information and more misinformation than ever available to influence those who are looking.

“We need to delve into telling our story on the Internet a bit more,” Hildebrand said. “Things change on the Internet all the time. What worked for us on Facebook or Twitter a week ago might not work for us today. It’s an ever-changing landscape of technology that we use to tell your story how it should be told. If we aren’t telling it, someone else will tell it for you. Without our voice in that space, it gives room for someone to yell a little louder.”

While those in agriculture tend to be a little more logical, using numbers and science to tell their story, Hildebrand said that’s not always what consumers relate to online.

“The science shows science isn’t an effective way to communicate your story, even though we have science on our side,” Hildebrand said. “It just doesn’t resonate as much as a scary video.” That’s why food bloggers and influencers can be valuable translators and help expand the farmer’s message to even wider audiences now and in the future.

More often than not the consumer isn’t in the grocery store anymore.

According to the Pew Research Center, 60% of married couples with children under the age of 18 were dual-income households, up from 25% in 1960. Today, the household grocery shopping may be done by whoever has the time between the end of the workday and the start of after-school activities. With time at a premium, there’s less time to comparison shop and convenience is the key selling point.

Delivery apps, such as “GrubHub” on phones means restaurants can come to your door, without the hassles of shopping. In 2017 CNBC reported the investment firm Cowen predicts a 79% surge in the total United States food delivery market by 2022, rising to $76 billion. The firm also sees online delivery usage isn’t just a millennial trend, but the 35-44 age group is also taking to the trend. This means fewer people are actually preparing their food in their home.

Those who do choose to prepare meals at home are turning to meal ingredient delivery services like “Blue Box” to take the headache of recipe planning and grocery shopping off your plate. Once a week a box comes to your door with no fuss, pre-measured ingredients and photo illustrations how to whip up the step-by-step recipe in under an hour. Grocery stores like Kroger and Walmart are utilizing web-based shopping services, where one of their associates gathers your groceries from the list you input online. You can add your coupons and pay with a credit card, and drive up into a designated spot and the bags are loaded into your car while you wait. No need to wander the aisles for the latest sales and recipe ideas.