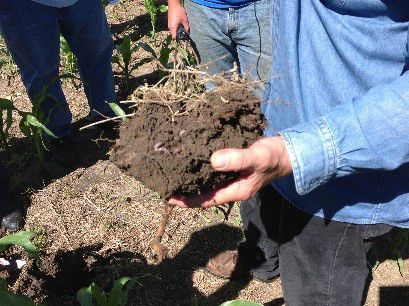 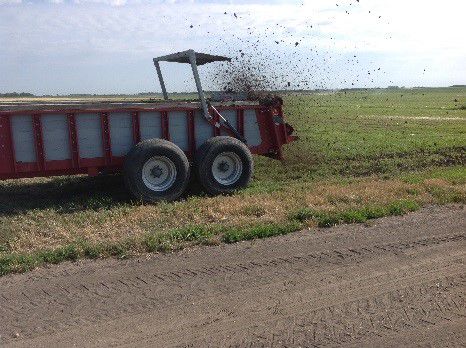 Conversations with lenders and landlords regarding rewards on manure applications and multi-species cover crops investments would likely be easier if financial rewards or measured soil physical properties came quickly. However, Sjoerd Willem Duiker, Penn State University soil scientist, says that a 1 percent increase in soil organic matter per year on a field scale is unrealistic.

To understand why a 1 percent soil organic matter build might be a better "decade goal" than a yearly goal, consider the calculations. For example, 1 acre of land (6 inches thick) weighs about 2,000,000 pounds. Therefore, 1 percent of 2,000,000 pounds equals 20,000 pounds, which includes both the stable (humus) and unstable organic components decomposing within the soil. When manure, such as solid dairy manure, is applied to fields, soil microbes decompose 80 percent of the manure for their food sources.  The remaining solid manure will only provide 90 pounds of stable carbon per ton of manure applied for building organic matter.  Thus, to increase the total soil organic matter by just 1 percent through dairy manure applications, it will require a total application of 222 tons (or about 20 tons applied per year for 10 years).

Fred Magdoff and Harold van Es in their book, “Building Soils for Better Crops” (2nd Edition), outline that even applying 20 tons per acre per year of solid dairy manure will only increase organic matter 0.065 percent per year. So, if relatively high applications of manure are added to soils, it will likely only be possible to increase organic matter content 0.17 percent per year. As a result, a goal of raising soil organic matter 1 percent would be far more realistic over a decade than one year. To attain this goal, it may be necessary to use other soil improving practices such as conservation tillage (limited till or No-till); cover crops; residue management; and nutrient saving manure application methods to enhance the soil building process.

Soil health building through manure applications can be further increased through grazing and incorporating cover crops into rotations. During the grazing process, part of the plant root system dies; then more soil carbon and nitrogen energy is available for microbes which in turn fix more stable soil aggregates and soil humus organic matter content.

excellent article to put it in perspective. There is an addtional very effective way to build organic matter . By stimulating the soil microbes near newly planted crop such as corn the result is much higher sugar production. The sugar feeds the microbes which multiply exponentially and the result is organic matter increase. It is a very effective method that can be done on large scale. Innoculants such as azotabactor and mycrorizhal fungi are used along with (ground soybeans& fermented fish) molasses, hydrolyzed fish, kelp and micros right in row with seed. Cost is around 100$/ac and excellent results as long as there is adequate moisture. Incorporate mulch layer on top soil and you have created a complete food wed cycle with amazing results. There is a unlimited amount of nitrogen produced with this system for excellent corn yields without the need for manures or a legume crop prior.