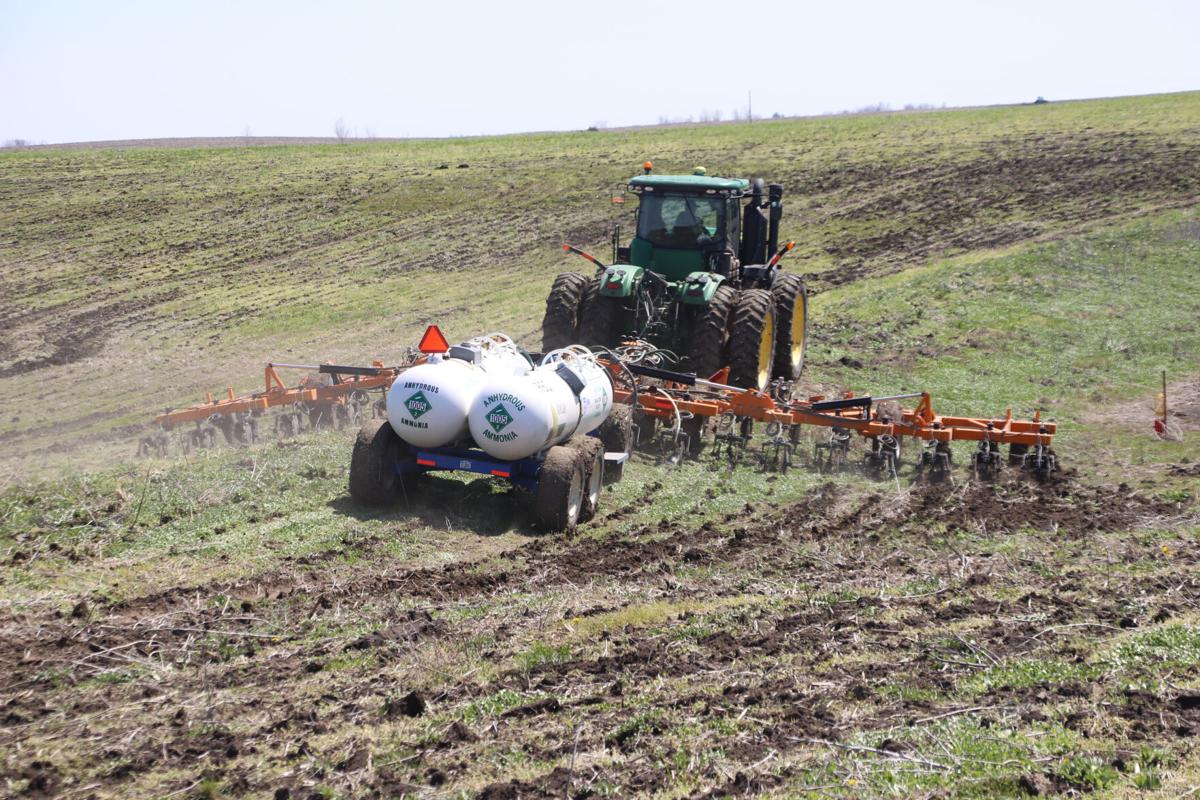 The Farmada has unique ground contour capabilty and oscillating axles of a fertilizer applicator that can apply nutrients over uneven terrain. (Courtesy photo.) 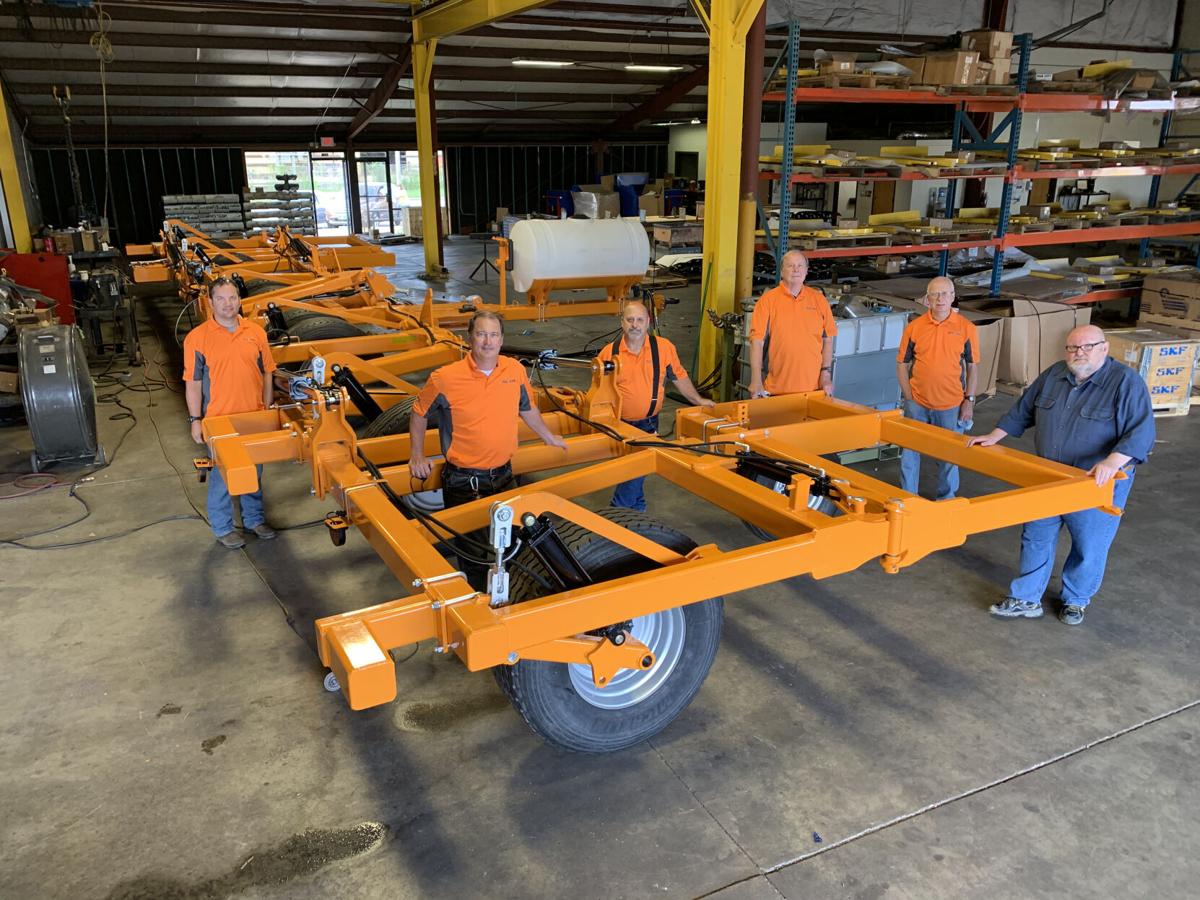 Nearly two decades into building worldwide markets for an established farm manufacturer, Daniel Rauchholz and several hand-picked colleagues are making a go of it on their own.

Pulling from his 18 years experience in gauging domestic and global agriculture conditions and movements, Rauchholz designed and developed a cutting-edge fertilizer applicator, dubbed ELXIR (pronounced like the word elixir).

The machine has the durability and versatility to apply all forms of crop nutrients over uneven terrain, he said.

The new company—Farmada—is impressing dealers in Illinois and snaring attention throughout the Corn Belt. Coming in medium to extra-large sizes—from 15 to 26 rows at 30-inch spacing, up to 65 feet wide, that folds up for easy transport—the EXLIR has been introduced so far in Illinois and Missouri.

Farmada is looking to add dealers and distributors in other states, including Kansas.

Farmada equipment is built at Grain Belt Supply in north Salina, and the company is working with Shield Agricultural Equipment in South Hutchinson, with the company’s proven ground engaging components.

Known and appreciated for understanding what’s going on in agriculture, Rauchholz—a well-traveled multi-lingual American now living in Salina, Kansas—launched his company in March 2018.

He left Great Plains Manufacturing, a maker of farm equipment and landscaping equipment in the Land Pride division, in 2016. The company was founded by his father-in-law, Roy Applequist, who sold to Kubota in July 2016.

Rauchholz was president of the Great Plains International division and also spent some time overseeing domestic and international customer service from 2010 until his departure. He based his future on being adept at current conditions.

“I saw a USDA forecast that showed through 2024 that corn and soybean prices would not go up significantly, and we had a trade war with China,” Rauchholz said. “The Chinese don’t want to be dependent on the U.S., so they only buy from us when they really have to. They hedge bets with other countries.”

A swine flu plague in China resulted in more than 100 million head being destroyed, he said. Then came the COVID-19 pandemic that caused a global economic recession.

OPEC was producing too much oil, causing a price plunge and making ethanol less competitive. Because 95% of ethanol in the U.S. is derived from corn, Rauchholz said the result is a stark decline in demand for corn, which will continue to keep corn and other commodity prices depressed.

“These factors are what impacted decision making,” he said. “I figure if prices are not going to rise, it’s pretty critical for farmers to have a way to lower costs, and the cheapest form of nitrogen is anhydrous ammonia.”

Versions of ELXIRs have been tried out on different farms, said Skip Klinefelter, owner of Linco Precision, a Farmada distributor in north central Illinois near Bloomington. He makes a living farming in south central Illinois.

Rauchholz has “included the thoughts of farmers and retailers in the development, and has brought in some international influence,” Klinefelter said.

“We took a couple of those toolbars to the fields last fall and worked ground in Iowa, Missouri and Illinois, and with good results,” he said. “Then we did it again this spring with even better results.”

“That whole deal threw some dust on our experience, but we still have a number of very interested people,” Knoop said. “We have sold a number of them for fall delivery. Some are going to some major users in Illinois.”

Much of the anhydrous is being both sold and applied by farm cooperatives, he said, and co-op customers are liking what they see.

“If we can get a number of these machines out, I think it’s going to fly,” Knoop said. “It’s the flexibility, the new things they have incorporated into this machine.”

Among the most critical needs from growers, according to ELXIR promotional materials, “is to have a fertilizer toolbar that can handle the most diverse ground conditions.”

The machine touts a 40-degree range of motion with a design that maintains proper depth in applying fertilizers. Helping in that mission are “hybrid oscillating axles” that perform well in the field and on the road, providing even tire wear, including on crowned roads, the materials read. “The oscillating wheels will allow side-to-side depth gauging for accurate placement of NH3 or fertilizer” and there is better control while transporting from field to field. “The oscillation spreads the weight across each tire equally.”

ELXIR can put down anhydrous in liquid, dry or any combination.

“It can do all those things,” Rauchholz said, and equipment costs are “going to be in line with the competitors, anywhere from 5% below to 5% above, depending on the options people pick.”

The entrepreneur has a hit, Knoop said, and he’s earned it.

“Daniel is somebody who has always been on the cutting edge,” Knoop said. “He’s a team builder who normally surrounds himself with capable people from various backgrounds.

“Surrounding is one thing. Listening and talking to those people is another. Incorporating their ideas; he’s a master at that.”

The machine continues to evolve as Rauchholz and his team listen and put suggestions into the design.