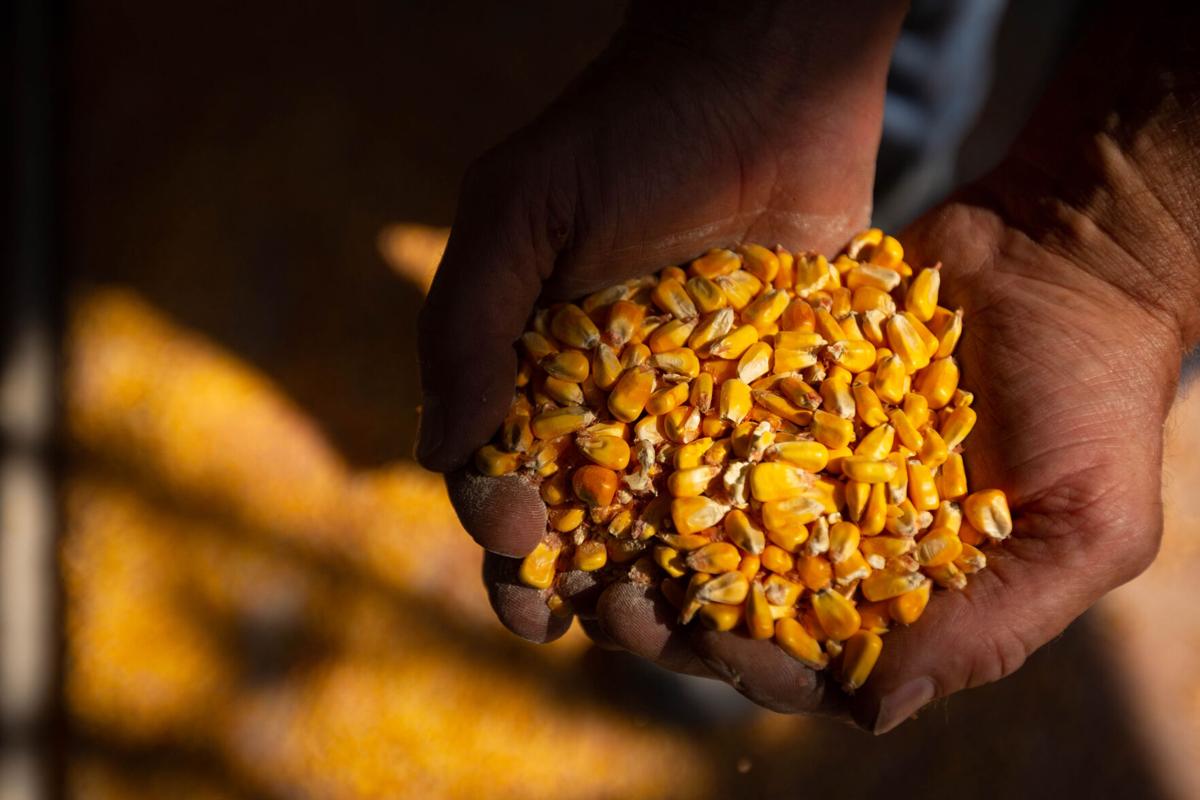 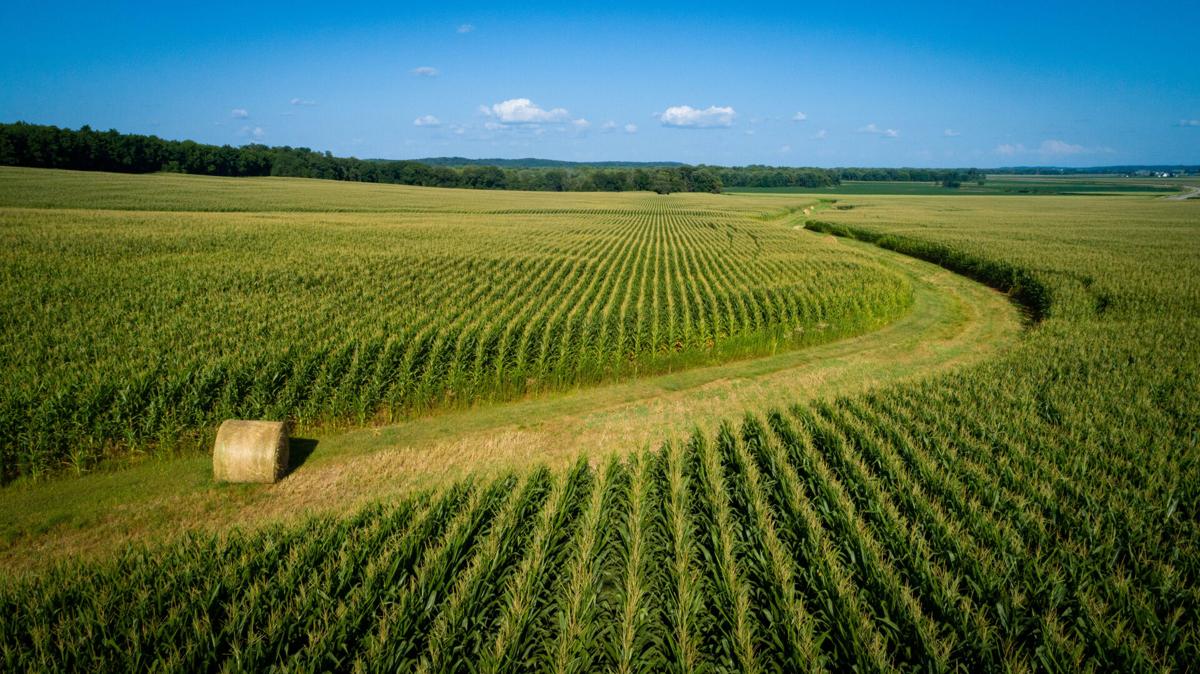 Pete Brecht still recalls his excitement in the not-so-distant past when his cornfields bested 100 bushels per acre.

At the time, the Iowa farmer said, it seemed unsurpassable.

However, technology continues to transform the landscape of American farming, including for Brecht. His uniform rows of corn on his Central City operation have more than doubled in yield since those early days on the farm. Yet, Brecht, despite corn’s genetic achievements during his 35-year career, knows he can do better.

How quickly does a corn plant grow? How much water does it use at different stages? How does chlorophyll content vary depending on growing conditions? How many quality corn ears will a plant produce by the end of the season? And, for Brecht, his question is this: How can he use such data to maintain or produce more bushels an acre but with fewer inputs?

Understanding a plant’s physical traits and linking those traits to specific genes will ultimately improve crops, increase yields and provide greater food security worldwide, said Brecht, who serves as director of the Iowa Corn Promotion Board and as the chair of the organization’s Research and Business Development Committee.

Phenotyping, the process of measuring traits, is nothing new when it comes to crop genetics. Yet, while scientists have made significant advances in sequencing the genetic makeup of corn, the technology to help identify how those genes control important traits, lags behind.

The groundwork was laid back in 2009 when researchers—after years of work—decoded the complex corn genome, said David Ertl, the technology commercialization manager for Iowa Corn. For the first time, researchers could see all the genes in a corn plant.

“We now understand what the genes are, but we don’t know what they do yet in terms of growth and production,” he said.

That is about to change, he said. Thanks to the use of drones and other 21-century advancements, plus collaboration among the nation’s universities, researchers are hurdling into the uncharted frontier of phenomics. Meanwhile, federal funding awarded last fall is helping researchers at land-grant universities expand their research, which in the past, has been localized and isolated.

A $3 million grant from the U.S. Department of Agriculture’s National Institute of Food and Agriculture will allow researchers from Texas A&M, the University of Nebraska and Mississippi State to collaborate on phenotyping and improve plant growth predictions, including with the use of drones.

Another federal grant supports an Iowa State University-led effort to spur the development of a genome-to-phenome infrastructure for nationwide scientific collaboration across crops and livestock. The nearly $1 million project provides guidance and lays the foundation for a larger federal Agricultural Genome to Phenome Initiative sponsored by the USDA’s National Institute of Food and Agriculture.

Researchers will work to efficiently develop hybrids that are better suited for different environments, Ertl said. It also will help farmers determine how to best manage their cornfields, including water and nutrient needs.

“It should help farmers select the right hybrids for the right field, once we understand how hybrids perform in different environments,” he said. “Can we detect plants that are under stress? Are there certain signals or phenotypes that are given off that could give us clues? There is so much we can do now with computer analysis and all this new data that we can collect and start to make sense of it. It’s hard to predict where it can go.”

In the United States, corn remains king, which is often evident from the mountains of tarped grain outside of county elevators. In 2019, the nation’s farmers grew more than 90 million acres worth $52 billion, according to the U.S. Department of Agriculture.

Yet, the effects of climate change are expected to impact the signature crop. Scientists, including Iowa State University's Pat Schnable, recognize the world is growing warmer and weather patterns are more variable. Moreover, corn is a staple food across the globe. To address this challenge, researchers are focusing on a wide-scale plant phenotyping initiative in an effort to design better corn plants for ever-changing environmental conditions.

“In order to do that, we need more data,” said Schnable, director of the university's Plant Sciences Institute. “While there is a lot of research on corn, there are fundamental challenges—both biological challenges and research and analysis challenges. We want to understand what makes corn lines more drought tolerant than others. How do we determine what genes or portions of the genetic code confer drought tolerance?

Momentum grew in 2013 with the Genomes to Fields Initiative, said Schnable, who co-led the initiative. This program, funded in part by the Iowa Corn Promotion Board and the National Corn Growers Association, leverages the mapping of the corn genome to identify key corn genetic traits and how the plant responds to environmental conditions.

Schnable’s hope is today's technology, including sensors and drones, will give researchers more accurate data analysis and help them better connect the information in corn’s DNA, or genotype, with traits, or phenotype.

“There is a huge amount of work to do if we are going to produce the next generation of hybrids that are designed for a world where the climate is becoming more complicated,” he said.

Until recently, tracking such phenotypic measurements has been time and labor-intensive. Cutting-edge tools like drones will catapult phenomic research, allowing scientists to better understand the complex corn genome—composed of over 32,000 genes, said Seth Murray a research corn breeder at Texas A&M and the university's Butler Chair for Corn Breeding and Genetics.

“What used to take five people to measure plant height in July when it is hotter than heck and no breeze and you are standing in a cornfield calling out numbers now, with drones, takes 30 minutes and a week of data processing. We can get many more observations of plant height and it costs less.

“Plant height is one of our important indicators of yield and stress resistance,” Murray added.

Murray has been using drones in his research for about five years. Through the grant and collaboration with the other universities, Murray will continue to expand on the university’s phenotyping research already in progress.

Murray said the grant also aims to advance and apply the use of drone-based methods for data collection and to create a national standard for collecting, cataloging and analyzing phenotype data. He noted the already immense volume of information from past phenotyping research as a good example. Determining plant traits and analyzing them creates a lot of data but the process of collecting, disseminating and getting it to growers in a useful format will require some standardization.

Phenomic research is 30 years behind genomics, he said. But now, with phenomic selection, scientists are taking everything they are extracting from drone images and timepoints to better predict yields and biological discovery—early results are showing that this is even better than they could with genomics.

New frontier on the farm

Ertl, who once was a corn breeder for Pioneer, recalls going into the fields himself and measuring each trait only one time during the growing season. Now changes in a plant's growing cycle can be measured on a weekly or even daily basis.

“With drones, you can go into a field as frequently as you want and measure the crop,” he said. “We can not only understand the yield at the end of the season but now understand how it got there. We never have been able to have that time sequence of data during the growing season. We’re just beginning to get some data that would show why different hybrids yield different.

For farmers like Brecht, it might be several years before new genetics make it into his fields. What excites him is the possibility of measuring traits that couldn’t have been measured before because of new technologies and research efforts.

“There is going to be a lot of good information come out of this," Brecht said. "It is an exciting time."

Amy Bickel can be reached at journal@hpj.com.