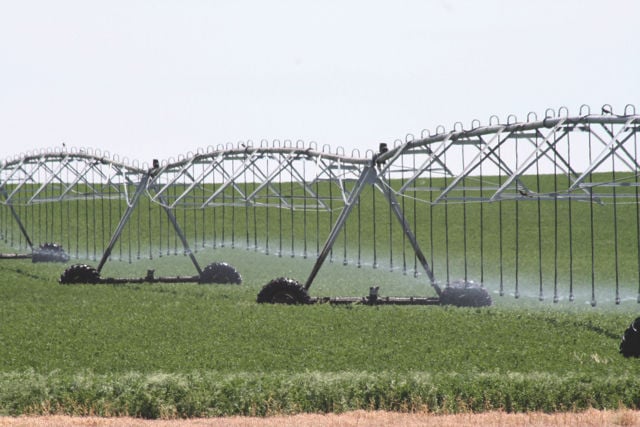 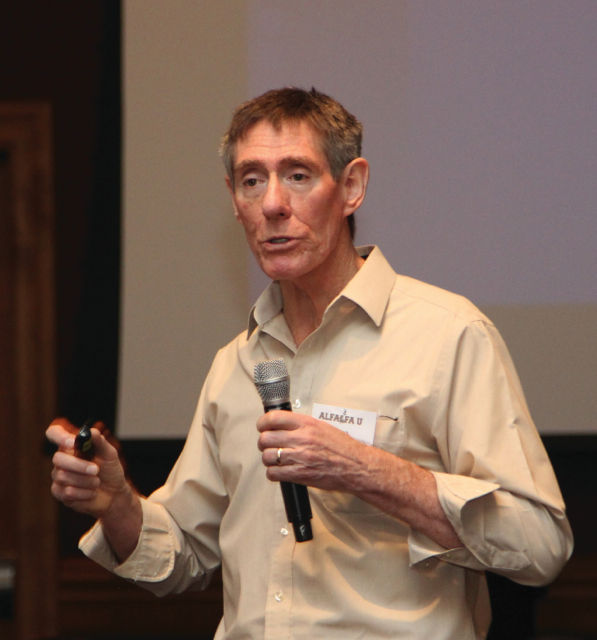 University of Nebraska-Lincoln professor, Bruce Anderson discussed irrigating alfalfa during the Dodge City, Kansas Alfalfa U event. Anderson called alfalfa a thirsty crop which could use upwards of 40 inches of water during a growing season. He leads forage extension and research at UNL. (Journal photo by Kylene Scott.)

University of Nebraska-Lincoln professor, Bruce Anderson discussed irrigating alfalfa during the Dodge City, Kansas Alfalfa U event. Anderson called alfalfa a thirsty crop which could use upwards of 40 inches of water during a growing season. He leads forage extension and research at UNL. (Journal photo by Kylene Scott.)

Alfalfa can be described as a thirsty crop, according to Bruce Anderson, professor at the University of Nebraska-Lincoln.

“It’s a very thirsty plant,” Anderson said. “It’s a plant that’s going to yield pretty much proportional to how much water we’re able to get to it.”

However, if the alfalfa plant gets any kind of stress, its growth will slow and reduce the number of tons or pounds of hay per acre it will produce in a year.

“So trying to keep a good supply of water to those alfalfa plants throughout the growing season really is critical to maximize its yield potential,” Anderson said. “It may take anywhere from 4 inches to 8 inches of water to produce a ton of alfalfa, and so it’s very challenging as we go through the year to be able to keep up with this kind of water demand.”

In southwest Kansas, many irrigation systems have a tough time keeping up with more demand going into a summer season. Anderson suggests producers look at other ways to get the most out of their water resources and their alfalfa stand.

He suggests the following management goals:

“As we go through the year, the water demand, the water use by the alfalfa is going to change on a daily basis,” Anderson said. “But essentially, it’s going to require very little water to begin with, but as soon as it starts growing very rapidly in the spring it’s going to increase its water demand until it reaches a full canopy level there and then we harvest it.”

Following harvest the water demand will drop to nearly half of what it was during the growing season, but it does not take long at all for regrowth to begin. This could be up to 0.3 or 0.35 of an inch per day.

“So those water demands get to be pretty significant when we get into that summer time period,” he said.

Some alfalfa producers may be able to get a ton of hay from only 4 inches of water, but by mid-summer it’s going to take up to 8 inches to accomplish the same thing.

“So looking at how efficiency of water use changes through the seasons is something we need to keep note of and use that kind of information most efficiently use of water resources that you’ve got available there to our alfalfa plants,” Anderson said.

With high water demand during a full growing season and keeping the water to the alfalfa crop and still using it up to its full potential, 40 to 45 inches of water supplied to the alfalfa plants may be needed for maximizing potential production.

“Again, you’re dealing with not all irrigation water; hopefully you’re going to have somewhere, 15 inches or so rainfall a year or something like that. Maybe 10 inches in this area,” Anderson said. “You can use your rainfall, but it’s going to take an awful lot of irrigation to maximize that alfalfa production.”

Anderson compared watering a corn crop to an alfalfa crop, as there are big differences in the water needs of the two crops.

Alfalfa has a much longer growing season and greens up relatively early.

“It’s probably using water several weeks in the springtime before we even plant any corn,” he said. “And then after you’ve taken corn to harvest, your alfalfa’s still green out in that field. It’s still using water getting ready for winter.”

There may be as much as a six-week longer growing water use period with alfalfa than corn. The alfalfa plant has more potential to produce a much deeper root system so it can access water deeper in the soil profile than corn.

“The way we irrigate our alfalfa is going to influence to some extent how well we take advantage of that potential and what we can do when we achieve that potential to modify our irrigation practices most effectively out there,” Anderson said.

Anderson again emphasized the need for a good soil moisture reservoir, forcing the alfalfa plants to look for the deeper water and keeping the soil drier at harvest.

“Come to first harvest with the field profile down 6 to 8 inches deep being at field capacity,” he said. “That will enable you to be short in terms of water during those periods of time where we do force the alfalfa plant to use those deeper roots to use water, and allows us to have that soil dry so that we don’t cause damage to our equipment and we don’t get weeds developing and we encourage the alfalfa regrowth to occur as rapidly as possible.”

In between cuttings, again try to water the soil thoroughly as possible.

“So that at the next harvest, there’s going to be water down there for those deeper alfalfa roots to use that the weeds and the surface won’t be able to use first.”