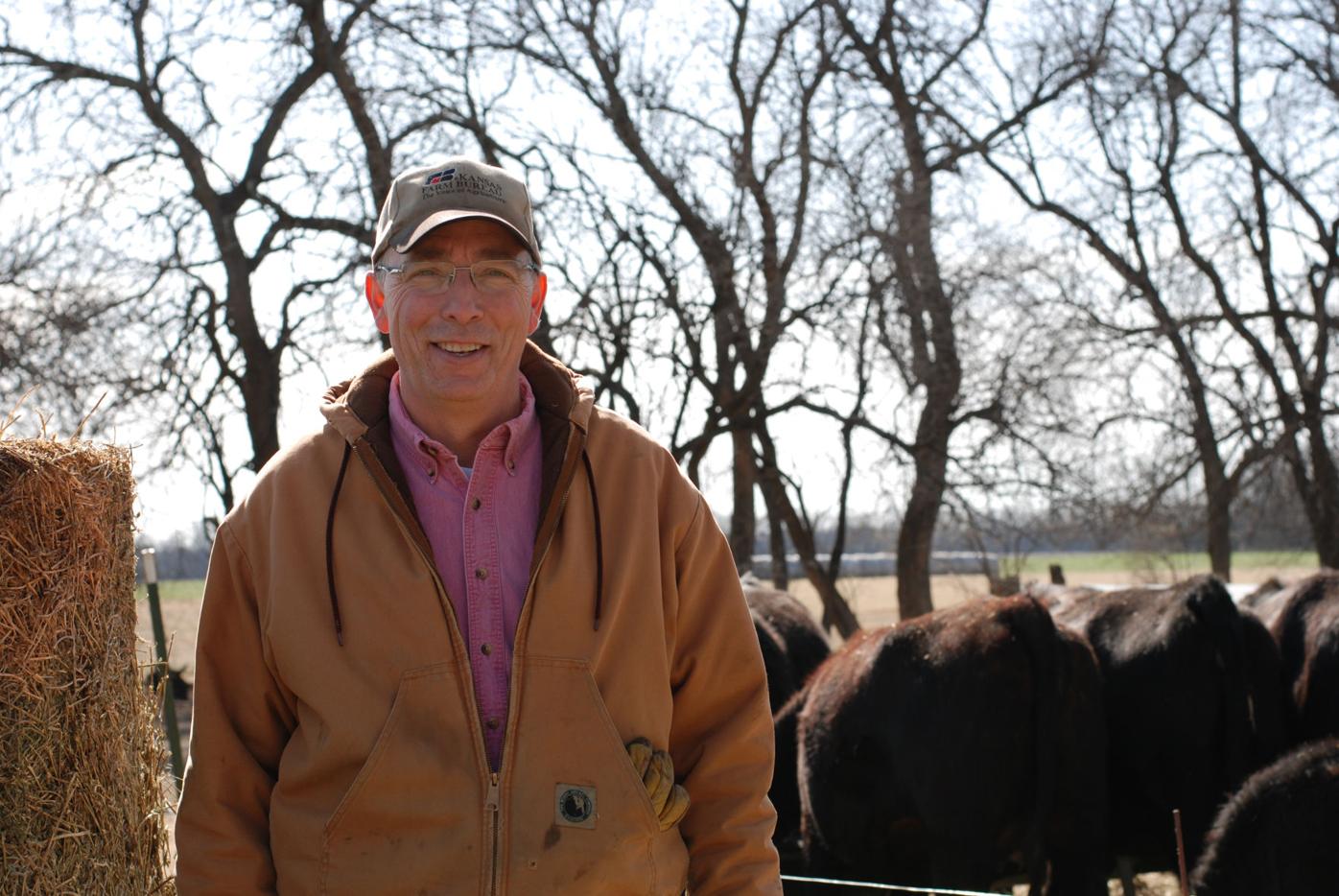 Harvey County, Kansas, farmer Steve McCloud checks on cattle he just fed at his farm between Newton and Goessel. Goessel was among a group of Kansas Farm Bureau members who spoke with Kansas lawmakers in Washington in March about a variety of issues. Among them was the need for rural broadband access. (Journal photo by Amy Bickel.) 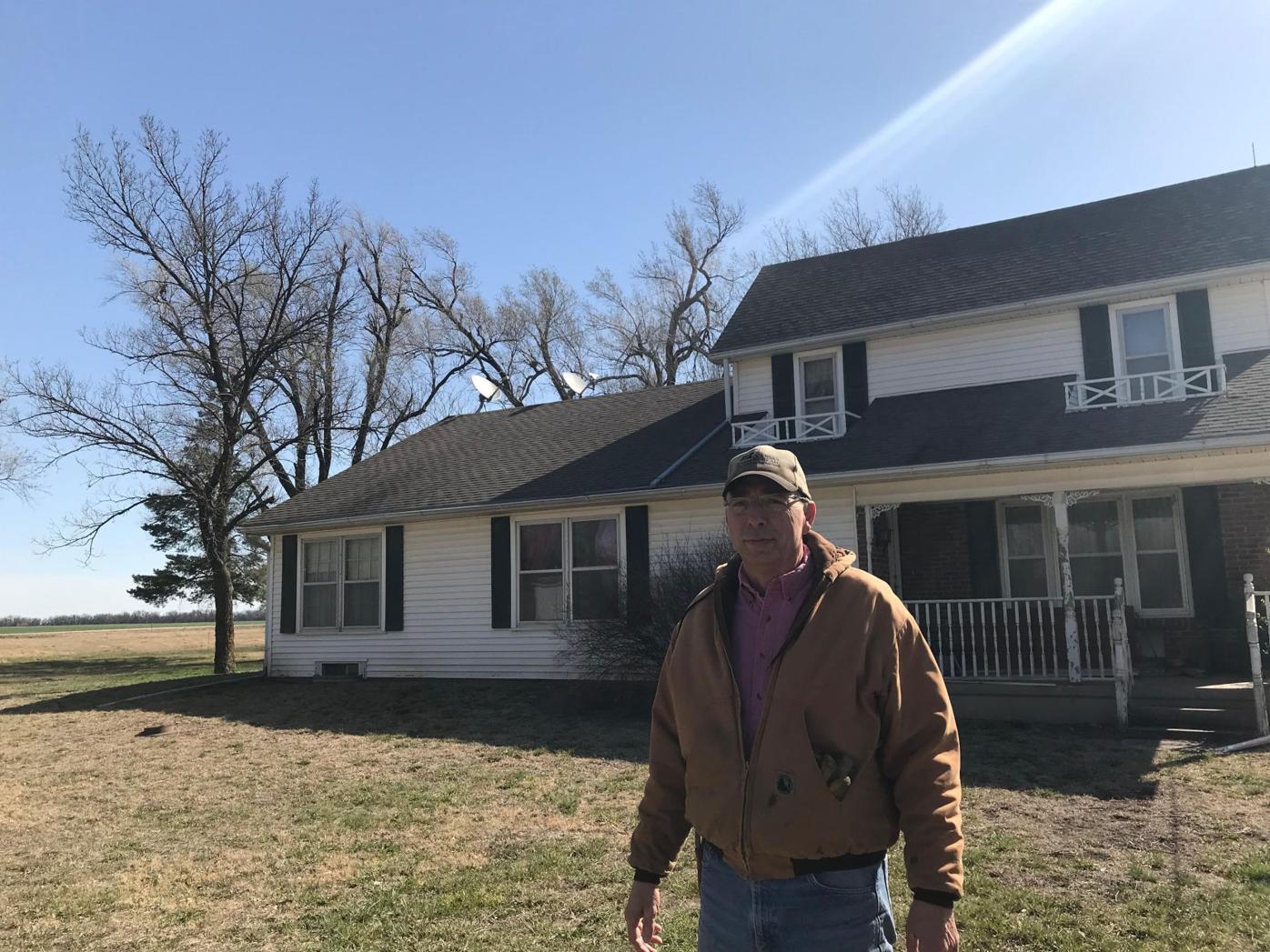 Harvey County, Kansas, farmer Steve McCloud stands in front of his farmhouse where a satellite dish is visible. McCloud has sporadic internet service through an expensive satellite provider. However, according to the FCC map, his farm has adequate coverage. (Journal photo by Amy Bickel.)

Harvey County, Kansas, farmer Steve McCloud checks on cattle he just fed at his farm between Newton and Goessel. Goessel was among a group of Kansas Farm Bureau members who spoke with Kansas lawmakers in Washington in March about a variety of issues. Among them was the need for rural broadband access. (Journal photo by Amy Bickel.)

Harvey County, Kansas, farmer Steve McCloud stands in front of his farmhouse where a satellite dish is visible. McCloud has sporadic internet service through an expensive satellite provider. However, according to the FCC map, his farm has adequate coverage. (Journal photo by Amy Bickel.)

Steve McCloud’s farm is in a black hole on the Kansas prairie.

On the map, the Harvey County farm is connected to the superhighway of information that has become a necessity in today’s society. But travel down the dirt road to his farmstead just 4 miles north of Newton and a different reality emerges.

The McClouds have slow and somewhat sporadic access to the World Wide Web.

A mile to the north Moundridge Communications is running new fiber. But the small-town telephone company can’t help him because he is not in its territory.

“So, I have satellite, which is better than nothing but not much—and it is expensive,” he said.

His kids get a gray wheel when trying to stream Netflix in the evenings and find downloading movies after midnight is a better option. And McCloud, who runs an appraisal business from the farmhouse he grew up in, said during daytime hours, the internet is “serviceable, at least for the most part.”

“But it’s not up to what I need, even for a home business,” he said. “I get by, but I literally have had times where I have gone to McDonald’s in Newton and taken my laptop to use their Wi-Fi and download stuff.”

According to industry records this year, the urban-rural digital divide leaves about a quarter of the nation without wired broadband access. Another 47 million are underserved, according to advocacy group Broadband Now.

It was just one of the issues that McCloud and about 100 Kansas Farm Bureau members addressed during a mid-March leadership trip to Washington. Besides talking farm bill, global trade and immigration, McCloud told his story to lawmakers and Federal Communications Commission Chairman Ajit Pai.

Pai, who grew up in Parsons, Kansas, understood the issues rural residents face. He noted he knows all the dead spots between Kansas City and his family’s southeastern Kansas community.

Every month, the FCC collects a small fee on phone bills for its Connect America Fund, which provide telecommunications services to areas that its maps show are underserved. McCloud, however, is left completely off the map that will be part of a reverse auction later this year.

This auction-style funding allows nationwide providers to compete for up to $2 billion in rural expansion support, according to the FCC.

“My fear is, according to the maps, we are covered, and we told Chairman Pai that,” McCloud said. “My fear is we are in this hole.”

Farmers and ranchers use broadband to follow commodity markets, communicate with customers and embrace technology. Many of the latest yield-maximizing farming techniques require broadband connections for data collection and analysis performed both on the farm and in remote data centers.

However, 29 percent of U.S. farms have no access to the Internet according to the USDA report, “Farm Computer Usage and Ownership, 2017.”

Those that do are still largely connecting through slow and unreliable sources like DSL, satellite and mobile hotspots.

Only 8 percent have fiber, the report stated.

The FCC benchmark speed to consider a community served by broadband requires minimum download speeds of 25 megabits per second and upload speeds of 3 Mbps. According to the report, 39 percent of rural Americans lack access to that benchmark, compared to only 4 percent of urban Americans.

Broadband is not a public utility, but it has been on President Donald Trump’s to-do list since taking office last year. Trump touted infrastructure expansion, which would include broadband, in his election platform, said Ryan Flickner, senior public policy director with KFB.

About $600 million for rural broadband was included in the omnibus spending bill signed by the president in late March.

Yet, while an infrastructure proposal would help their members, the price tag is hefty, Flickner noted. He also questioned who it would help. Some USDA Rural Development loans target communities of 50,000 or less.

Jackie Mundt, who lives with her significant other on his family’s farm in Pratt County, sees broadband access as an answer for rural America’s waning population.

The couple left corporate careers to return to the farm. Mundt started a consulting business last year from the farmhouse.

But Mundt must use her phone as a mobile hotspot.

“We don’t have anyone who can provide wired or high-speed internet,” she said. “Consistently, what we hear about the satellite option is it isn’t worth the investment—that it isn’t high speed.”

Even their mobile hotspot isn’t reliable.

“There are days we get less than a megabit per second download speeds,” she said.

She told Pai and Rep. Ron Estes her concerns during the trip.

Broadband investment could bring more professionals to rural America, she told them—folks who could do jobs from anywhere if they have good internet access.

Across the nation, the rural population is shrinking for the first time on record, according to the USDA’s annual report “Rural America at a Glance.”

Edie Doane, the Young Farmers and Ranchers program director of KFB, said Pai was supportive and understanding of the importance broadband could have to rural economic development, along with enticing young people to move back to rural areas.

“However, between the local politics and state regulations of which companies cover which areas, technological limitations that impact specific solutions and the tremendous price tags of reaching many of our members who live in remote locations across the state, there are still several hurdles to navigate before resolving this issue completely,” she said.

Mundt said her biggest question is who is going to make it happen.

“I’m not trying to criticize because I know their jobs are very difficult,” Mundt said. “I know it is going to be expensive, but I equate this to rural electrification in America. By choosing to live in rural America and feed the nation, I don’t think that people should be disadvantaged and be told ‘Oh, you can’t have broadband because it is too expensive or there is not enough of you there.’

“Really for us, having access to the Internet benefits everyone in the country because we do have the ability to be more productive and increase efficiency on our farms, which will benefit our food supply in the long run,” she said.

Optimistic about the future

As for the funding in the spending bill, Flickner likened it to building pasture fence, which is often estimated at $10,000 a mile.

That doesn’t go far, he said.

However, the work continues. KFB supports using universal service fees for the Connect America fund. Also, Flickner said, Microsoft is trying to reach the underserved through a “white space” spectrum.

Through its new coalition, Connect Americans Now, Microsoft is targeting television’s white space spectrum. The technology would give rural residents access to broadband internet wirelessly over unused channels. The $10 billion initiative would bring broadband to 2 million rural Americans by 2022.

“It’s a great technology because it will go through nuclear bunkers and bomb shelters,” Flickner said of the signal.

The range, however, is only 10 miles, meaning there would need to be more towers.

And, there is still McCloud’s issue—with the FCC map showing his property has adequate coverage.

Sen. Jerry Moran, R-KS, is one of the congressional leaders concerned about inaccurate mapping data and how this would impact federal agencies’ ability to effectively allocate resources. Last month, he sent a letter to Pai expressing concerns. He also questioned Commerce Secretary Wilbur Ross about the inaccurate maps during a hearing.

McCloud remains optimistic about the future. However, hopes his farm isn’t overlooked.

“Really our spot on the map that isn’t serviced isn’t all that big compared to the wilds of western Montana,” he said. “That is my fear. I totally get it. It isn’t a winner or losers type of thing.”

He added, “I’ll believe it when the plow is going by and installing fiber in front of my house.”