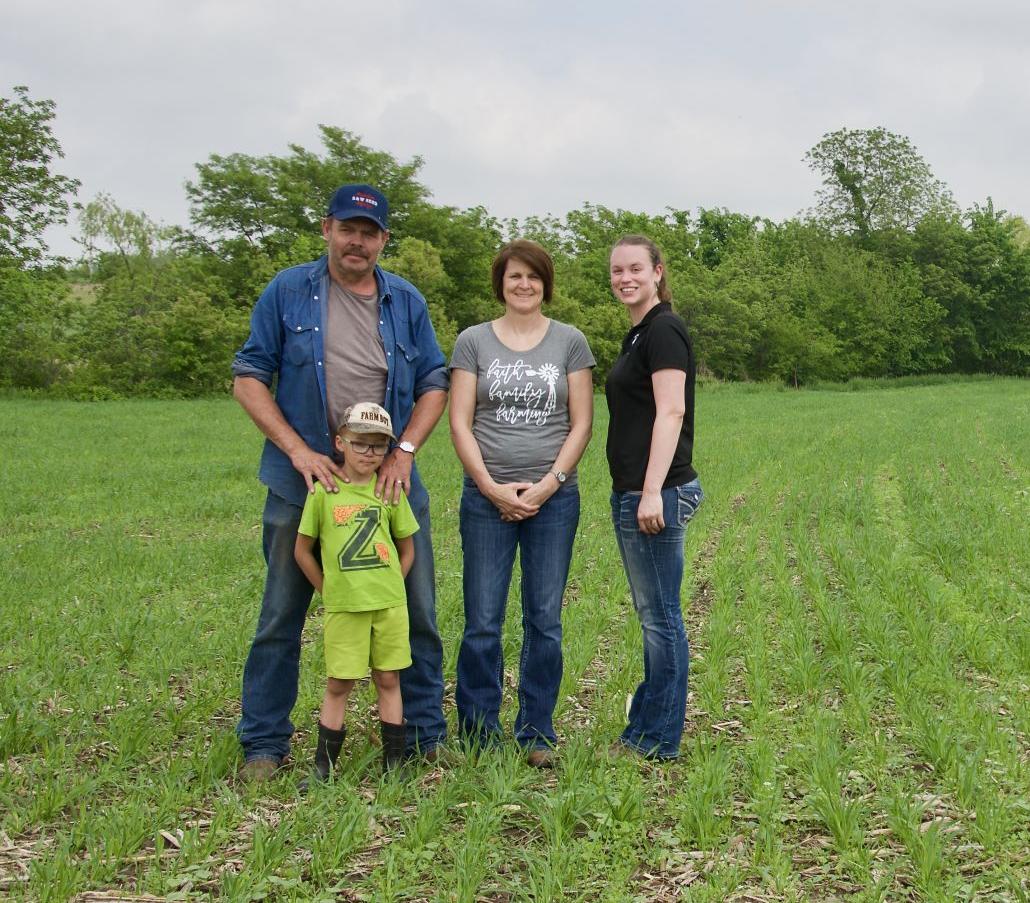 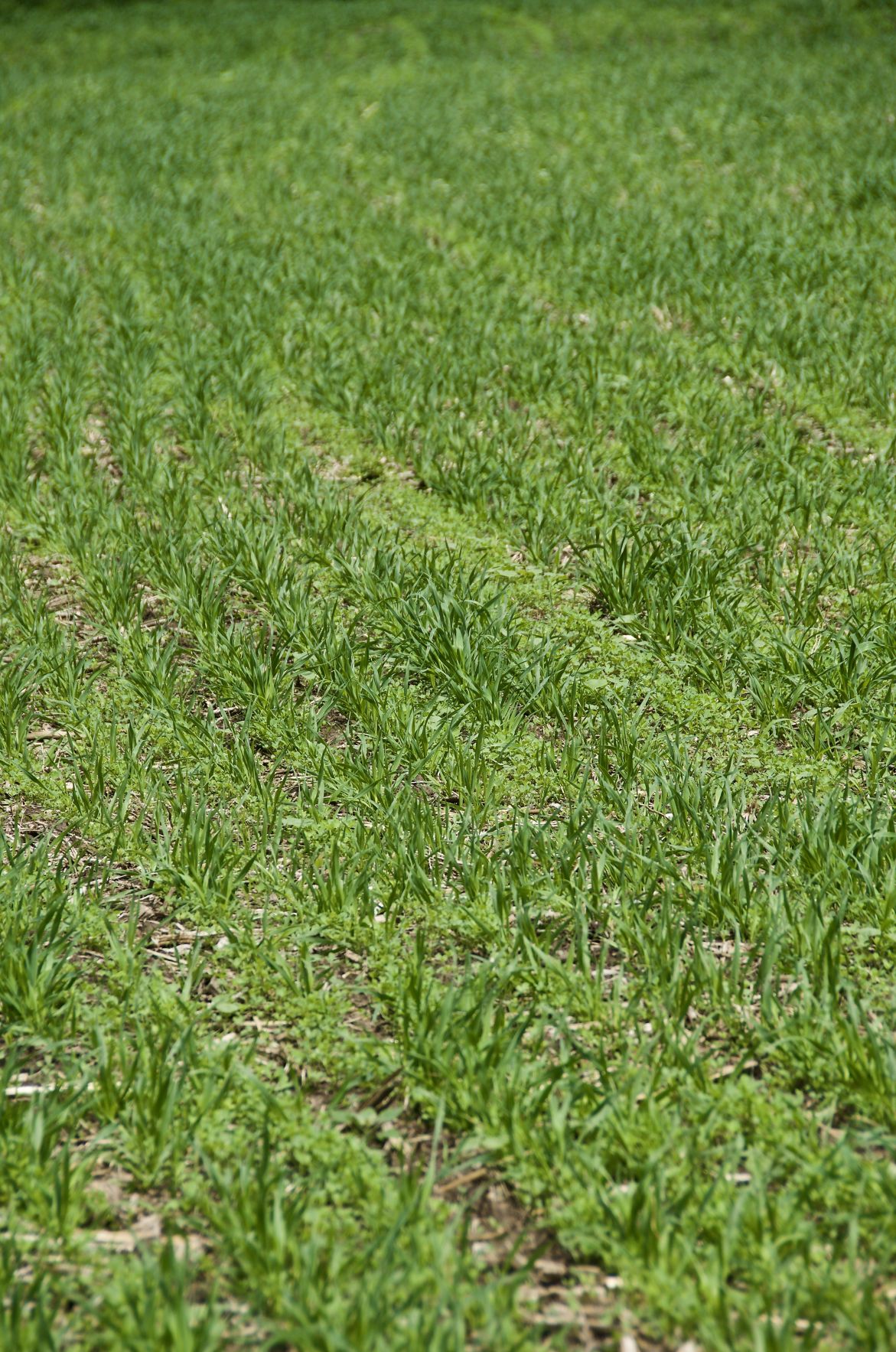 The early spring growth of oats, red clover, alfalfa and orchard grass in Ed Hakes’ field, near New Market, Iowa, will eventually be harvested for feed for his cowherd. (Journal photo by Jennifer Carrico.) 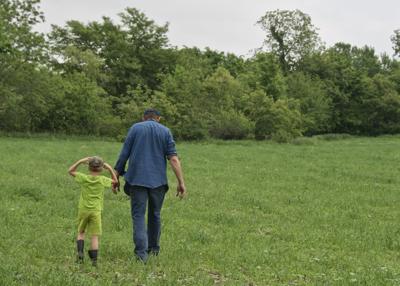 Ed Hakes subscribes to the theory that they aren’t making any more black dirt.

“If my son is going to farm here,” the New Market, Iowa farmer explains, “we have to preserve it now.”

Hakes is participating in the Taylor County Water Quality Initiative Project in southwest Iowa, the aim of which is to help reduce nutrient load in Iowa waters and the Gulf of Mexico. It is a pilot project stemming from the Iowa Nutrient Reduction Strategy, which began in 2008. Since then, counties across Iowa have been developing plans of their own to access water sources and reduce sediment run-off.

Erin Ogle, project coordinator for the Taylor County Water Quality Initiative, said the Taylor County Soil and Water Conservation commissioners wanted to develop a county-wide project, rather than a more localized watershed project. Available to all farmers in Taylor County, the three-year project started in 2016 and focuses on marginal acres such as sidehills or unproductive acres that are in row crops and shouldn’t necessarily be farmed.

“The goal is to seed down unproductive, unprofitable acres to improve soil health and water quality and improve the overall return on investment for the farmer,” Ogle said.

Hakes became involved because he had a piece of ground with less-productive side hills that he could seed down with oats, red clover, alfalfa and orchard grass to make it produce feed for his cowherd.

“This is a great program. It’s preserving the soil, water is used more efficiently and there are less restrictions for the cattleman than there are with CRP,” Hakes said. “This way we can make these improvements and have a hay crop.”

The Taylor County project provides money for three practices: crop to pasture or hay for $250 per acre over a five-year commitment; soil builder for $60 per acre; and terraces with a third crop at 50 percent cost share. To date, nearly 1,500 acres have been seeded down, two terrace projects are in progress and two terrace projects have been built.

“We have over 50 producers involved in this project, which shows how much farmers want to take care of their land,” Ogle said. “We’ve received $400,000 in grant money to run this over a three-year period. We hope there will be more grant money available as more farmers want to participate.”

“There’s definitely more land I would put in this program if I can and the funding is available,” Hakes said. Farmers in Taylor County are limited to 40 acres per year in order to allow more producers to participate.

With the addition of the programmed acres, Hakes will be up to 55 acres of hay to help feed his 140-head cowherd. He also backgrounds his calves plus a few more he buys, so the extra hay will be helpful for feed.

“I think we are on the right track with the Nutrient Reduction Strategy and we want to keep the momentum going,” Naig said. “We are celebrating the fifth year of the strategy, which gives us a chance to look back and celebrate what we’ve done and rededicate our efforts for the work that needs to be done.”

The Iowa Nutrient Reduction Strategy is a science and technology-based framework to assess and reduce nutrients to Iowa waters, which flow to the Gulf of Mexico. It is to help reduce nutrients in surface water from both point and non-point sources in a scientific, reasonable and cost-effective manner.

The Mississippi River/Gulf of Mexico Watershed Nutrient Task Force was established in 1997 to coordinate activities to reduce the size, severity and duration of hypoxia in the Gulf. Hypoxia is a large area of low oxygen that can’t sustain marine life. Nutrients that lead to algae growth are the main culprit.

In its 2008 action plan, the task force called upon each of the 12 states along the Mississippi River to develop its own nutrient reduction strategy.

The strategy set out to increase voluntary efforts to reduce nutrient loss by:

• Increasing management practices involving application rate, timing and method, plus the use of cover crops and reduced tillage;

Naig said with the legislature passing and Gov. Kim Reynolds signing into law Iowa Senate File 512, $282 million in funding will be dedicated for water quality over the next 12 years.

“This bill moves us forward on water quality. We will continue to provide cost share for water quality efforts and projects, but the new funding will focus on edge-of field practices like wetlands, bioreactors and saturated buffers and we will move from a demonstration phase to an implementation phase to scale up and these efforts,” Naig said.

Hakes said he has always been conservation-minded on his farm. “We want to put as much green humus on our ground as possible to add organic matter to our soils,” he said. “All farmers need to think about how to take care of the land for the next generation.”

Ogle said she and the farmers involved in the Taylor County program are anxious to see how the water and soil samples have changed by this fall from the original samples taken before planting occurred.

“That will be the real test to know if we are getting the progress we need to improve water quality,” Ogle said.