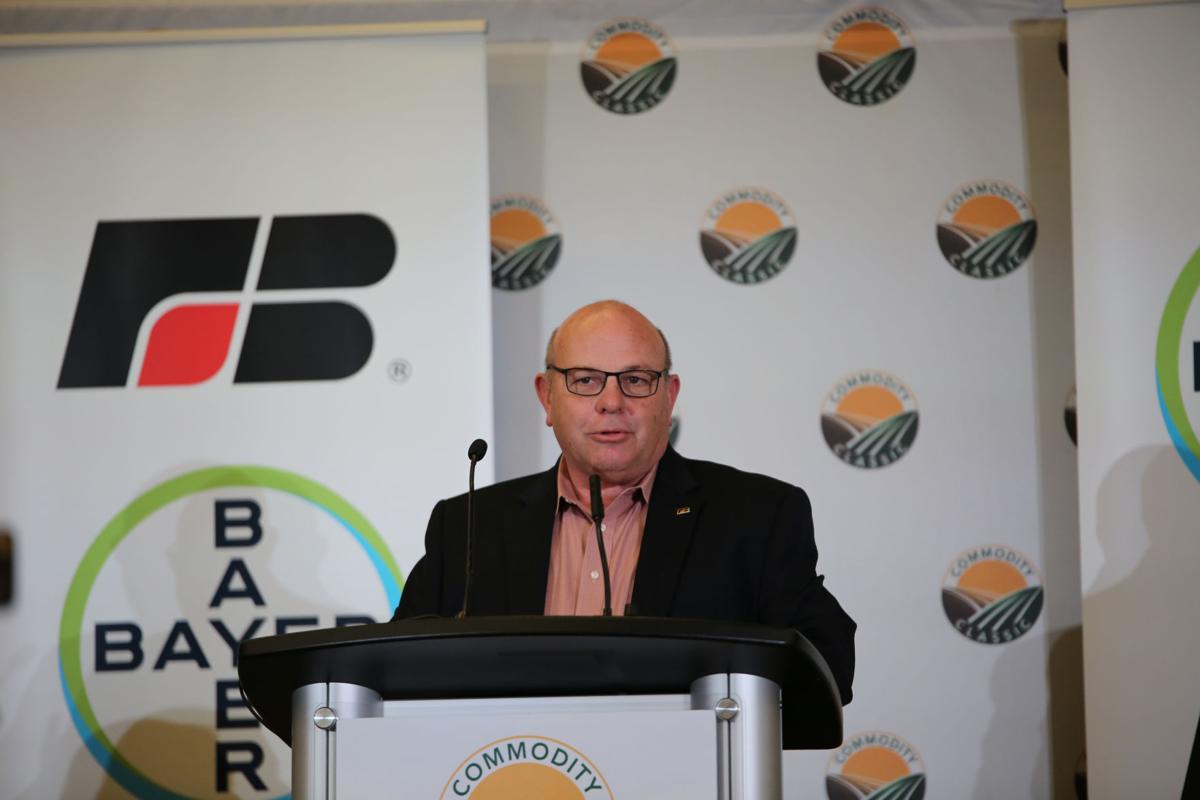 American Farm Bureau Federation President Zippy Duvall helped announce Feb. 27 at the 2020 Commodity Classic, the transition of Bayer’s Farm State of Mind campaign, an initiative to raise mental health awareness among the farming community, to AFBF. The campaign aims to reduce stigma surrounding the topic of mental health in rural communities and to provide relevant information to farm families on this important topic. Farm Bureau plans to combine the Farm State of Mind assets with those of its ongoing Rural Resilience campaign, expanding the reach and effectiveness of its rural mental health initiatives. (Journal photo by Kylene Scott.) 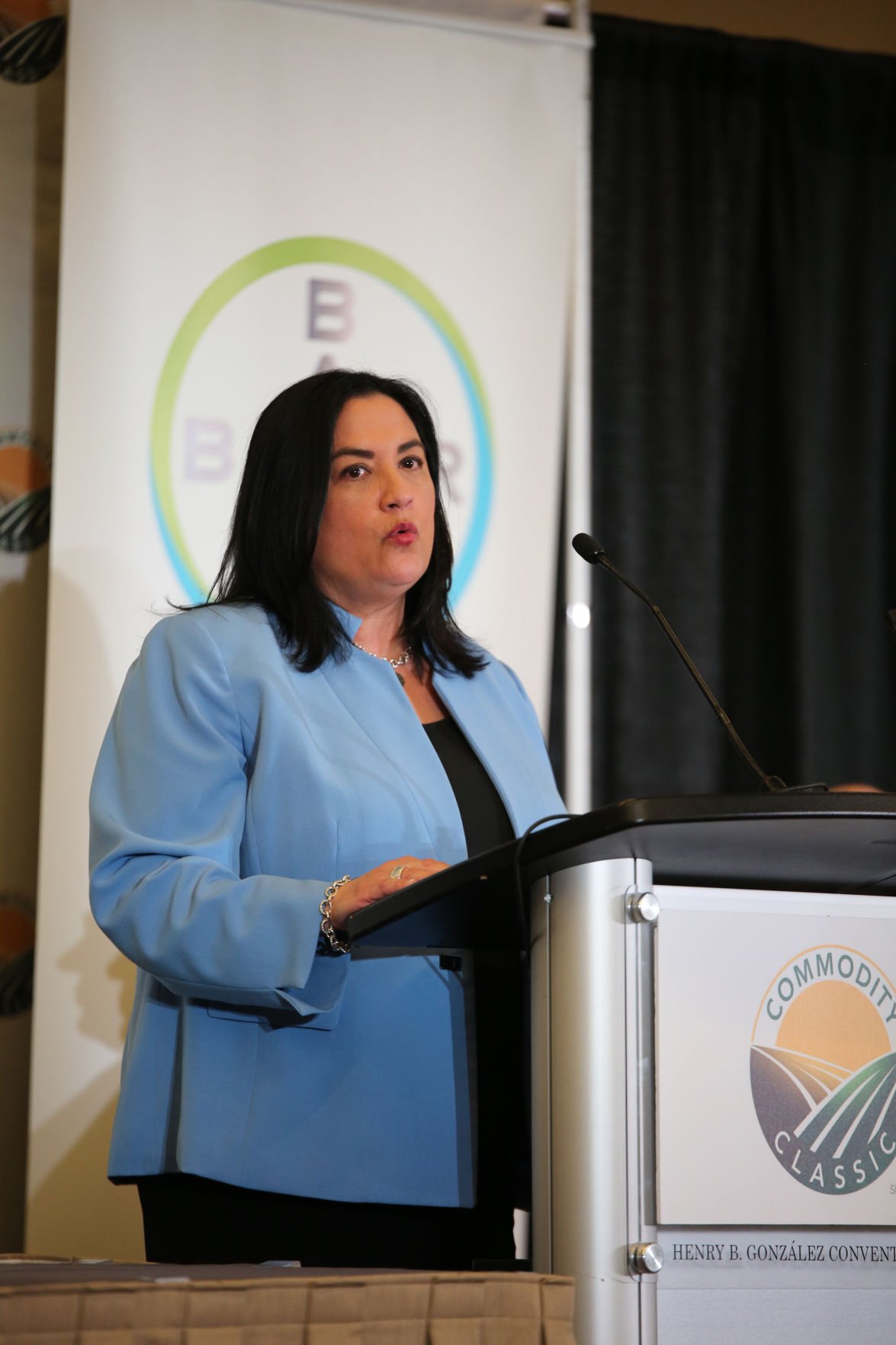 Lisa Safarian, president of Bayer Crop Science for North America, helped announce Feb. 27 at the 2020 Commodity Classic, the transition of Bayer’s Farm State of Mind campaign, an initiative to raise mental health awareness among the farming community, to AFBF. The campaign aims to reduce stigma surrounding the topic of mental health in rural communities and to provide relevant information to farm families on this important topic. Farm Bureau plans to combine the Farm State of Mind assets with those of its ongoing Rural Resilience campaign, expanding the reach and effectiveness of its rural mental health initiatives. (Journal photo by Kylene Scott.)

Declining farm incomes, low commodity prices, a trade war and harsh weather have pushed some farmers to the brink. Many are struggling with stress, and some have even been suffering from mental health issues. Some have even decided to end it all.

At the 2020 Commodity Classic in San Antonio, Texas, Bayer and the American Farm Bureau Federation announced the transition of Bayer’s Farm State of Mind campaign, an initiative to raise mental health awareness among the farming community, to AFBF.

Farm Bureau plans to combine the Farm State of Mind assets with its ongoing Rural Resilience campaign to hopefully expand the reach and effectiveness of rural mental health initiatives. The campaign aims to reduce stigma surrounding the topic of mental health in rural communities and to provide relevant information to farm families on this important topic.

AFBF President Zippy Duvall said mental health is an important topic and he is thrilled the two programs can be joined together to further reach other people.

“It says a lot about a company like Bayer when it cares enough to create a campaign like this,” Duvall said. “I am a farmer and Farm Bureau is made up of farmers or ranchers who experience the joys and struggles of being on the farm and producing food and fiber not only our country, but the world.”

AFBF reaches 5.9 million members, and Duvall believes this important priority can reach all it needs to.

“We conducted a survey last year and 90% of the rural of adults say mental health is important,” Duvall said. “We were surprised by that number. Almost half of those adults are experiencing more mental health issues today than they were a year ago.”

The pressure is getting to farmers and ranchers, especially the young farmers, he said.

“Put yourself in the position of a young farmer coming into the industry—in 2011 and 2012 with good commodity prices—started with all kinds of excitement and energy,” Duvall said. “And then having the rug pulled out from under them.”

Everyone should pay attention to his or her family and neighbors who farm—especially the younger farmers who haven’t gone through hard times.

“Farmers are two times less likely than other rural adults to talk to a friend or family member about mental health,” Duvall said. “I’m a farmer. And farmers just don’t tell people their problems.”

Duvall said farmers are a creative bunch, spending their lives “fixing things with baling wire and duct tape.” He along with a large number of others, keep their feelings inside, not even “dump that problem on our wife.” He spent 30 years milking cows and experienced a number of emotions during that time.

“A lot of times I was just pressured to the point where I was just miserable. No one there to talk to me. And I wouldn’t share it if they were,” Duvall said. “But then the next day I might be singing along with a radio with country music. It is definitely a roller coaster ride.”

Duvall was warned about the stresses of the lifestyle by his father and experienced the lows of farming during the 1980s where nightly news reports had stories of farmers committing suicide. It was a difficult time and one to learn from.

“We do not want to ignore the problem and have those reports come out on a daily basis,” he said. “We want to help farmers before they get there. Farming is a complicated business.”

Running a family farm in modern times has gotten more complicated over time, Duvall said, because of changes in technology, and farmers trying to keep up and be able to afford to buy those technologies. Then add in regulations, the tariff war and commodity prices, things get even worse inside someone’s head.

“Farmers also worry about transitioning their farm to their family or to relatives or to another young farmer that might want to farm in the future,” Duvall said. “Whether or not you can afford to keep it going is a tremendous burden.”

By combining the Farm State of Mind and the Rural Resilience initiative it will help open up the lines of communication and increase awareness, Duvall hopes.

“We are proud to take this responsibility,” he said.

The Farm State of Mind initiative will help provide farmers with resources, encourage conversations and reduces the stigma surrounding the issue of mental health.

“These are difficult conversations to have and our heart goes out to those individuals and families who have been impacted, Safarian said. “It was important for us to provide information and resources on the topic to those who needed it.

Safarian said Bayer quickly realized this issue was much bigger than any one single company or group could handle.

“No group is better positioned than Farm Bureau to take the lead on this campaign to help realize its full potential,” Safarian said. “We feel strongly that Farm Bureau was the right organization to drive this important work and initiative forward capitalizing on their ability to drive awareness and reach with farmers and their families on this important topic.”

Bayer will continue to support Farm Bureau during the transition and following.

For more information about Farm State of Mind visit www.acceleronsas.com/ResourceLibrary/Pages/Farm-State-of-Mind.aspx?utm_source=Various&amp;utm_medium=Various&amp;utm_campaign=SAS_FSOM&amp;utm_content=FSOM_Vanity. For more information about Rural Resilience visit www.fb.org/programs/rural-resilience. Resources are expected to be combined by April 2020.