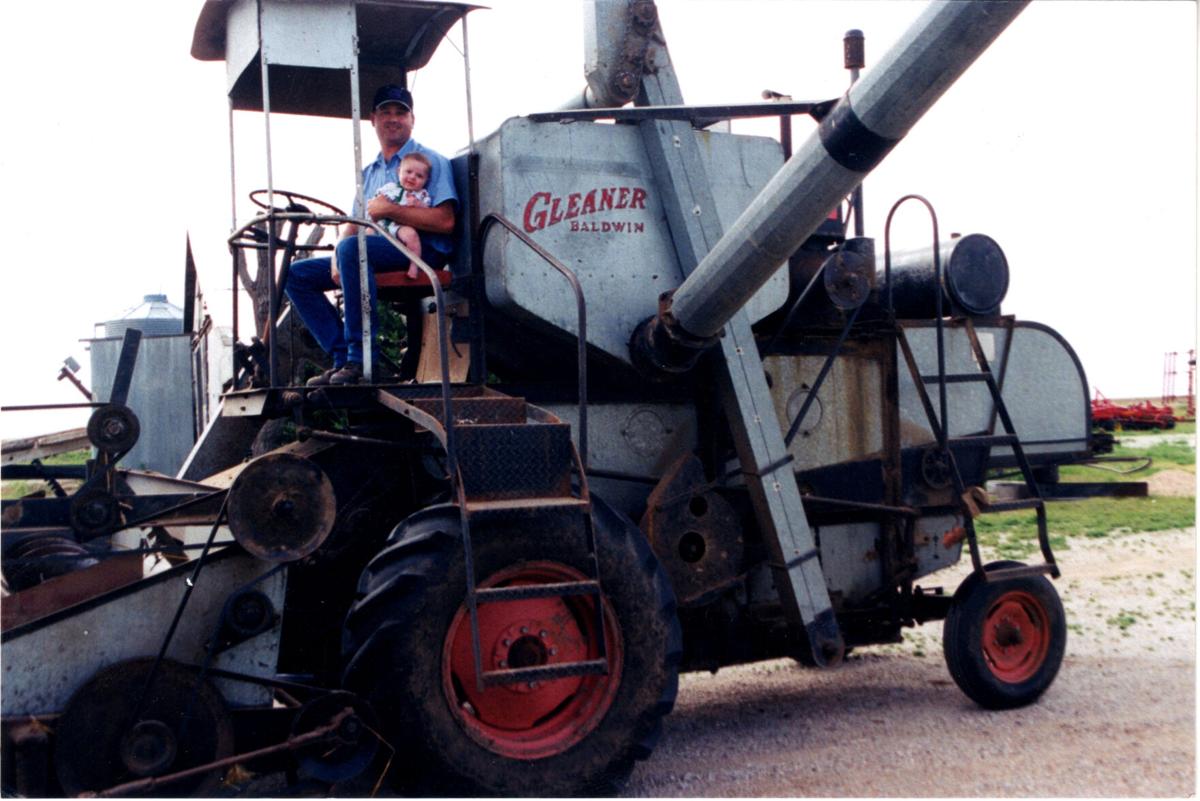 Bruce Baldwin of Kalvesta Implement aboard a 1955 Gleaner A combine. Baldwin's father, Hayes, originally sold the machine in the 1950s new. Bruce and his sister Cathy were able to aquire the machine and keep it in the family. (Courtesy photo.) 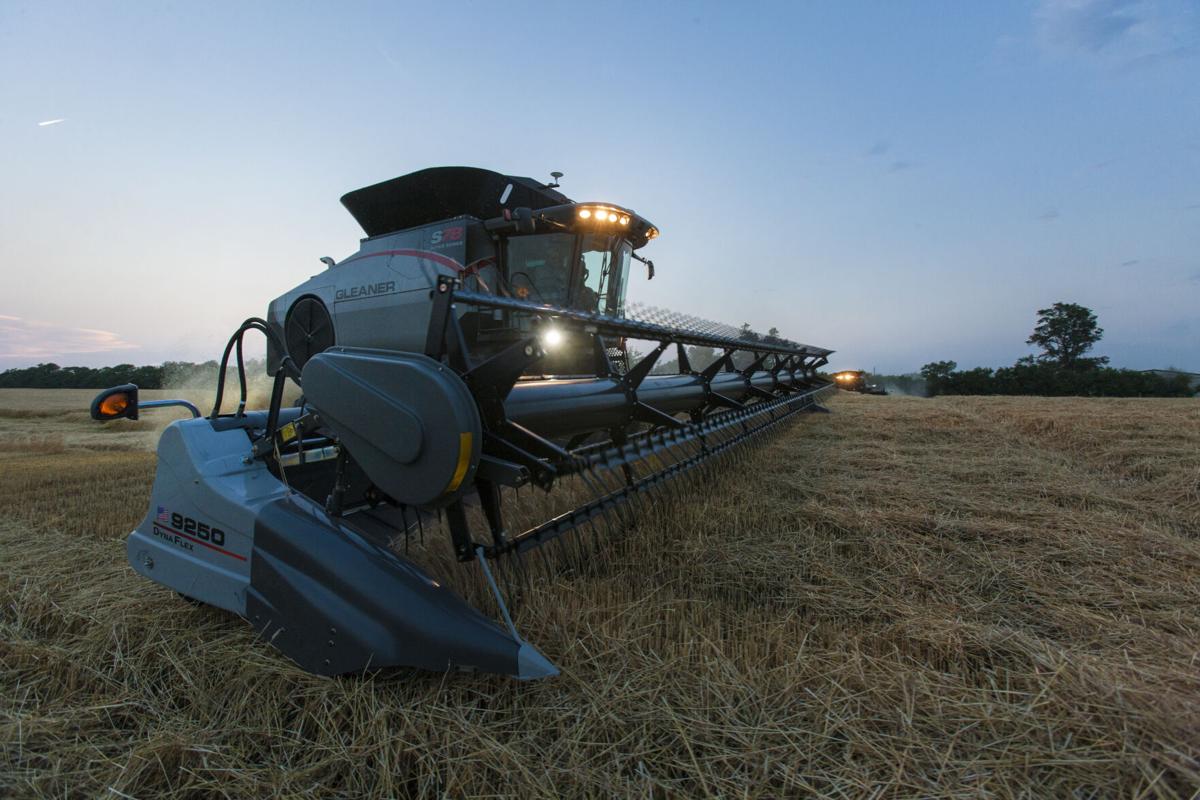 Ninety-three-year-old Hayes Baldwin still comes into Kalvesta Implement nearly every day, his son said, even though he’s been retired since 2005.

“He still comes in virtually every day,” Bruce Baldwin said. “He doesn't necessarily do a lot with the business. He likes to gather the mail and he likes to visit with people.”

Bruce along with his sister, Cathy, own the business now, and in 2020 have reached the 70th anniversary of the family owning and operating Kalvesta Implement in southwest Kansas. Hayes purchased the business Aug. 15, 1950, from the Norton family.

“We believe, somewhere around 1926 they actually opened the business up,” he said. “We've been in business 70 years, the business as itself is in the hundred year range.”

The Nortons started off with Gleaner combines and Baldwin thinks they had Oliver tractors too. When the business sold in the ‘50s, the dealership had Minneapolis Moline.

“Dad started out with Minneapolis Moline and Gleaner combines,” he said.

Gleaner was eventually purchased by Allis Chalmers, so Kalvesta Implement became a dealer for Allis Chalmers. Early on Hayes had short lines like Flex King and Noble along with other tillage equipment. Bruce said his dad told him in the beginning it was challenging.

“When dad first bought it, he talks about not knowing if he was going to have enough customers showing up to make it to the next month,” he said. “It wasn't all that easy for him. He said for about the first year, year and a half, he wasn't sure if this was going to work.”

But ultimately it has, and it’s fed a lot of families.

“We've had a lot of different families that have relied on us for their employment and employees relying on us to take care of them,” he said. “We've got a plan in place that we can hopefully continue this for as long as people are willing to drive to Kalvesta or pick up the phone and make a phone call to Kalvesta.”

They have since added to the lines they carry, and about 20 years ago added CLAAS forage harvesters. Bruce added CLAAS tractors in 2020. Currently they offer AGCO, Massey Ferguson, Gleaner combines, White planters, Sunflower tillage tools, along with Great Plains and a line of silage trailers from Meyer manufacturing.

Through the years, the family has worked together and it’s been worthwhile.

Currently they have 20 employees and, at times, a few more. His technicians travel around the area to service the lines they sell. Customers come from the surrounding area—Hodgeman, Gray, Lane, Finney and Haskell counties.

“With silage cutters we have our techs out running in Texas, Oklahoma, eastern Colorado, northern Colorado into Nebraska, Missouri,” he said. “So, we get spread pretty thin at times.”

Kalvesta is a tiny unincorporated town in Finney County, and Baldwin believes there’s only about 15 people who live in the city limits, but there’s many more in the community who live out in the countryside. Baldwin attributes their 70 years of success to their small community and loyal customers.

“I think if you asked any consultant if they would open a business here I would say they probably tell you no,” he said.

He’s not sure what has kept his dealership on the map all these years, but he has an idea.

“I guess probably resolve is probably more than anything,” he said. “Willingness to try to meet our commitments to our customers—that we said we would be here. So every time you sell another new piece or another used piece you feel like you've got a commitment to stay.”

Baldwin has watched the dealerships in southwest Kansas merge and buy out other stores, and he thinks the customers he serves don’t see the small town as a disadvantage.

“I think there is some desire from customers to do business with a single store,” he said. “That's not for everybody, but I think some people do like that. And so we kind of fill that niche.”

Those same customers like when they have to bring equipment to Kalvesta, they can easily haul it into the small town with limited traffic. There is one disadvantage, however.

“The disadvantages are you better bring your lunch. We don’t have a restaurant anymore,” he said. “You’ve got to plan ahead a little bit.”

A few years ago Baldwin received a phone call from a farmer telling him of a 1950s model Gleaner A combine. This wasn’t just any combine. It happened to be one his dad had sold new.

Frank Buehne, a farmer near Howell, Kansas, bought the machine new for $5,500. Buehne retired from farming in the 1970s. It was sitting in roundtop shed when Baldwin found it. He managed to get it started and headed back home.

“I made it most of the way home the first night before the rust got in the carburetor and I had to rig up a gas can onto it,” he said. “We’ve fiddled around with it. I've cut wheat with it.”

Top of the line in 1955, it had no cab or air conditioning. It came equipped with a 14-foot header.

Baldwin and his sister felt it was important to get the combine back in the family for a couple of reasons.

“Dad had sold that combine new and for whatever reason all the things that he had sold early on in his career, they didn't mean anything to anybody and they just went to salvage,” Bruce said.  “They're gone.”

When this combine happened to pop up, he was doubtful they’d ever be able to find one in the same condition this machine was in. And they were certain it was a machine Hayes had sold.

“That was very important for us to try to preserve a little bit of our history that way,” he said. “There's a lot of tractors around that Dad sold new, but most of them are in pieces.”

They were thankful this combine was in such good shape, and it didn’t take much for them to get it running again.

“So, that was important for us to do,” he said. “Dad, for whatever reason, he was never one to really save a bunch of memorabilia. Some dealers have that stuff rat holed by the ton. And Dad never did do that very well, he gave it away to somebody that wanted it.”

A lot of the memorabilia has disappeared over the years, and for Bruce and Cathy, it was pretty important to them to grab a few things they could find and put them away.

Gleaner celebrated 90 years in 2013, hosting a parade in Hesston, Kansas, where the manufacturing plant is currently located. Baldwin trucked his machine there and was part of the parade and celebration. As the company is closing in on 100 years, Baldwin believes part of the reason why the combines have been around for so long and remain viable is because of their simplicity.

“It is an extremely user-friendly combine,” he said. “It is simple. It is simple to work on. It is simple to set. It doesn't weigh a lot compared to some of the other combines so that's important with compaction in the fields.”

Custom harvesters find them easy to haul up and down the road, as well as being able to clean and save grain. Plus the cost of ownership is reasonable compared to the competition.

“The technology in them is equal to or better than some,” he said. “I think a lot of the people that have been Gleaner owners for years are the type of people that want to be able to fix little things on their own if they can.”

Baldwin feels like the more a customer can know about his machine the more likely he’ll buy another one because he knows how to take care of it.

“They're all going to have an issue. They're all not going to run trouble free,” he said. “Sooner or later something's going to break, and the closest technician you'll ever have is the guy running the combine. If that guy knows a little bit about how to fix them, he's going to be able to take care of it much quicker than somebody that you have to call and have them come out from town.”