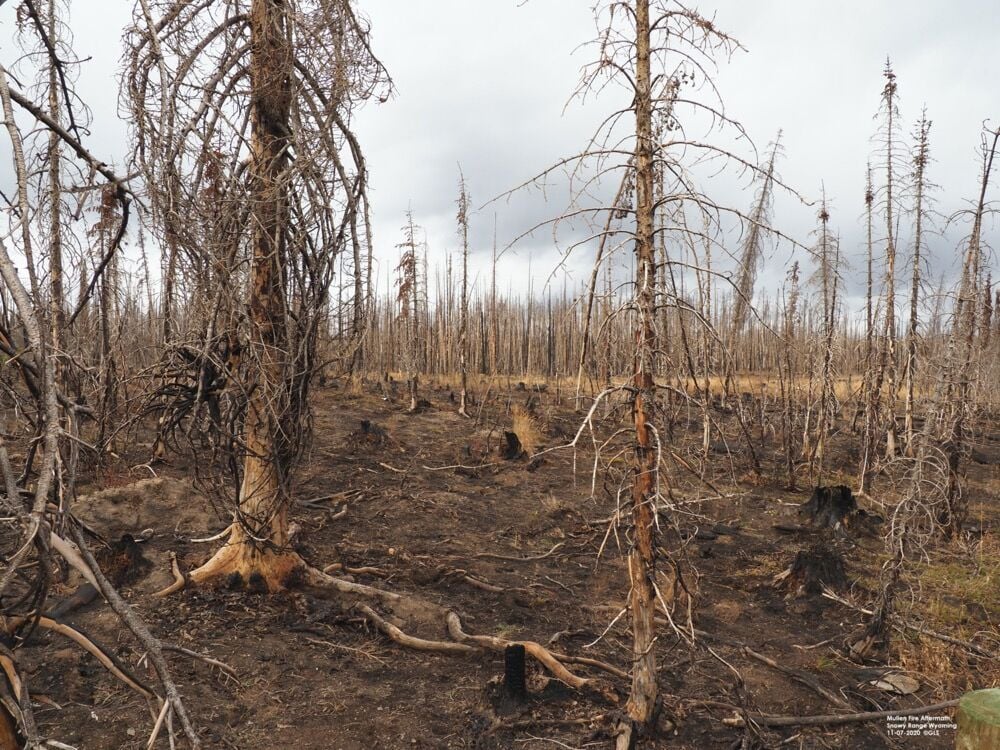 Aftermath from the Mullen Fire in the Snowy Range of Wyoming. (Photo by Gary Stone.)

Burn area from the Mullen fire along Wyoming Hwy 230. (Photo by Gary Stone.)

The wildfires that took place in Colorado and Wyoming late this summer and early fall are almost completely controlled, but they still might affect agriculture throughout Nebraska during the next growing season and for years to come.

Part of the Cameron Peak fire area takes in a portion of the headwaters of the Laramie River, which is a major tributary to the North Platte River. The remainder of the fire area is part of the South Platte River watershed. This fire started Aug. 13 and encompasses approximately 208,913 acres, or 326 square miles. It was 92% contained as of Nov. 9. The fire is located in the Arapaho and Roosevelt National Forests.

The entirety of the Mullen fire affects the headwaters of the North Platte River watershed. This fire started Sept. 17 and encompasses approximately 176,878 acres, or 276 square miles. It was 97% contained as of Nov. 9. The fire is located in the Medicine Bow and Routt National Forests.

Most of Nebraska was affected by the smoke from these fires, some days were worse than others. In the southern Panhandle, the air quality was very poor and visibility was limited to 5 miles or less on some days. Winds as high as 70 mph helped spread the fire in the rugged terrain already plagued by drought conditions and significant timber beetle kill from several years ago.

The fire crossed over into Colorado on Sept. 26. Burn scars from previous fires helped slow the fire’s progress and on Oct. 24 and 25, up to a foot of snow in the area helped significantly to reduce the fire spread. The fire boundary map would include approximately 40% of the southern portion of the Medicine Bow Range mountains, between Wyoming Highway 230 on the south and Wyoming Highway 130 on the north. All Forest Service roads within the fire area remained closed as of Nov. 9.

Just because there are a large number of acres indicated, not all of these acres are affected. The entire area is not burned to a char. The fire was spotty leaving some areas not affected and others mostly burned up. But there is still a large amount of beetle kill timber across the region and the potential for more wild fires is there.

The fires’ effect on water supplies in the coming years will depend on the amount of snow fall and snowpack received in the watershed during the winter and early spring. There may be slightly higher incidences of sediment runoff in isolated areas where there is little or no ground cover due to the fire. Any sediment will be contained in the seven reservoirs and regulatory dams located in Wyoming on the North Platte River.

Faster snowmelt runoff in the spring could occur due to an increase in the amount of sunlight hitting the slopes and warmer spring temperatures. Faster runoff would fill the reservoirs quicker, but if the U.S. Bureau of Reclamation who manages the reservoirs does not initially have sufficient reservoir storage space, they would have to release or move water through the system and could result in some low-land flooding along the river. But all of this is just a wait-and-see and will depend on what happens next spring.

For more information on these fires, visit https://inciweb.nwcg.gov/incident/maps/7208.