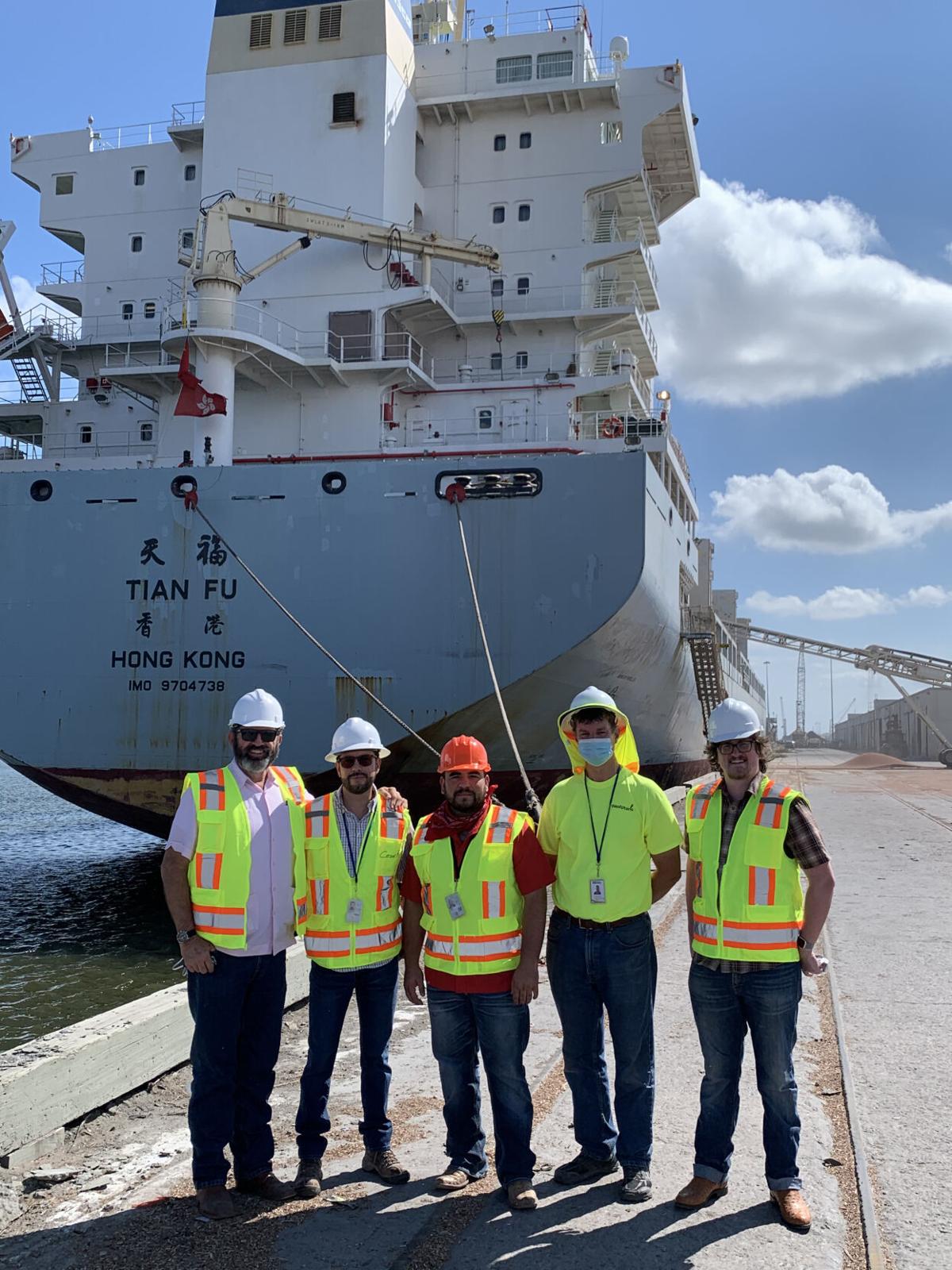 The Chinese vessel Tian Fu is just about ready to embark on its voyage to China with its cargo of U.S. grain sorghum. Wayne Cleveland, executive director of Texas Grain Sorghum, reports that about 30% of the 1.3 million bushels in this hold will go into Chinese liquor production, with the rest destined for livestock feed. (Photo courtesy of Cesar Ramírez at West Plains LLC.) 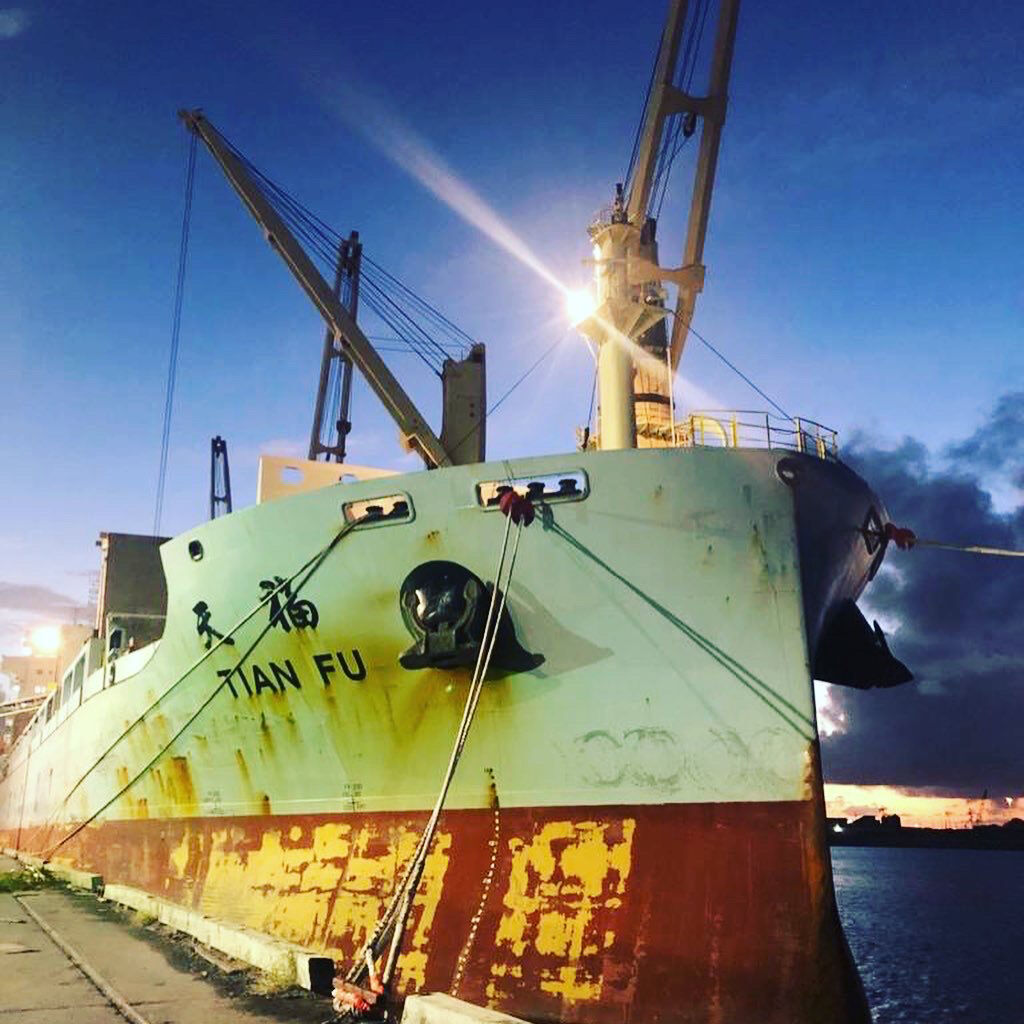 Wayne Cleveland, far left, stands with a group of grain sorghum growers and shippers at the dock near the Chinese Handimax ship, the Tian Fu. (Photo courtesy of Cesar Ramírez at West Plains LLC.) 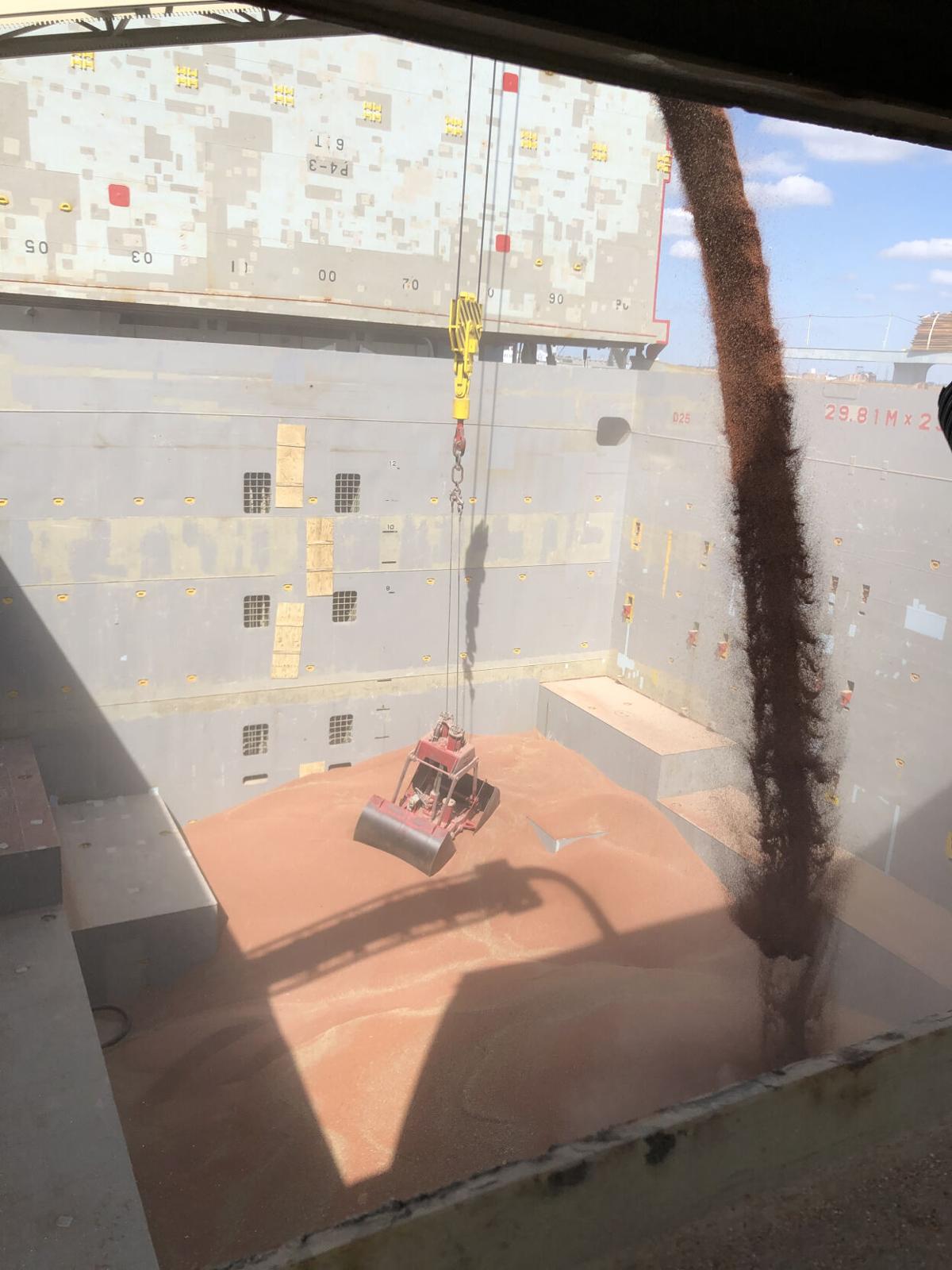 The first of four shipments of U.S. grain sorghum is being loaded at the West Plains, LLC grain handling facility at the Port of Brownsville, Texas, Aug. 26. (Photo courtesy of Cesar Ramírez at West Plains LLC.)

Early reports from agricultural commodity sources are that grain shipping ports were unaffected by Hurricane Laura, which made landfall in the early hours of Aug. 27.

Hurricane Laura, a Category 4 storm with sustained wind speeds of 150 mph, struck just between the border of Texas and Louisiana. News reports out of the area are of considerable damage to buildings, power lines and other infrastructure from the storm surge that trails the storm’s eye. By mid-morning Aug. 27, Laura’s sustained winds were clocked at 75 mph, dropping it down to a Category 1 hurricane, and forecasters expect it to weaken rapidly into a tropical storm by later in the day. Still, widespread flooding is forecast.

Wayne Cleveland, executive director for Texas Grain Sorghum, was at the West Plains LLC facility at the Port of Brownsville, Texas, the afternoon of Aug. 26, watching the first of four shipments of grain sorghum being loaded into a 33,000 metric ton Handimax vessel headed to China.

“The port was unaffected by the hurricane,” Cleveland said. Houston and Galveston had rain showers but no major disruptions from the storm.

“For now everything is shipping really smoothly, no disruptions and grain quality is excellent,” Cleveland said. Welcome news for grain sorghum growers who have been working diligently to open up wider trade into China’s market.

On Aug. 26, Mike Steenhoek, executive director of the Soy Transportation Coalition, had sent out an update email to stakeholders about the forecast path of Hurricane Laura through the Texas Gulf and the Mississippi Gulf.

“The Texas Gulf includes the ports of Corpus Christi, Galveston, Houston and Beumont and accounts for 23% of wheat exports, 1.5% of corn exports and 0.5% of soybean exports,” he wrote. He added that the ports most likely in Laura’s path would be Beaumont and Galveston since they are closer to the Texas-Louisiana line where landfall was predicted.

However, the facilities along the lower Mississippi River between Baton Rouge and the Gulf of Mexico account for 60& of soybean exports, 59% of corn exports and 15% of wheat exports, he added.

Because Laura was predicted to make landfall west of New Orleans, expectations were for significantly less disruption to the supply chain and infrastructure along the lower Mississippi River, including the five port regions of Port of Baton Rouge, Port of South Louisiana, Port of New Orleans, Port of Plaquemines, and Port of St. Bernard. The U.S. Coast Guard is monitoring the situation.

High Plains Journal will continue to monitor reports out of the region for impacts to agriculture and post them online at www.hpj.com.