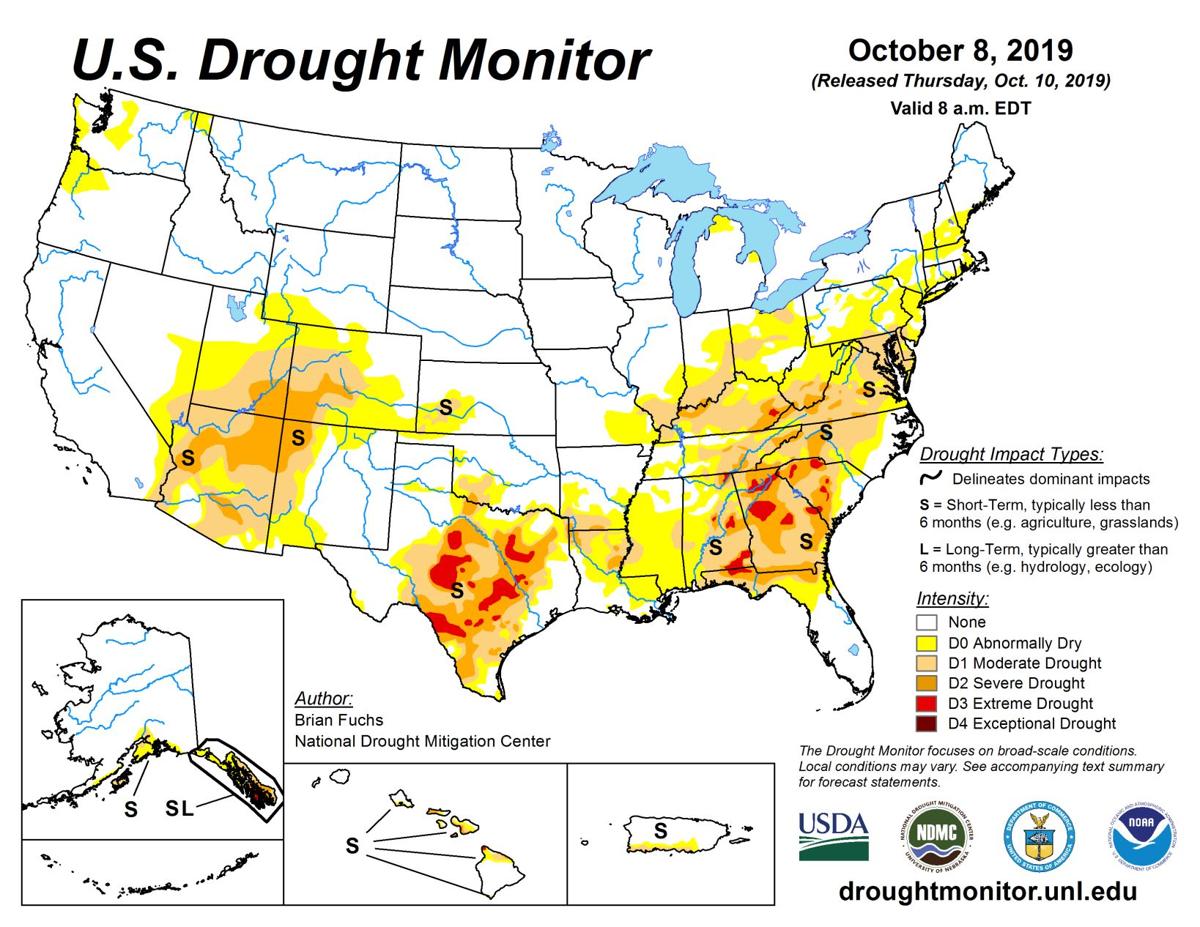 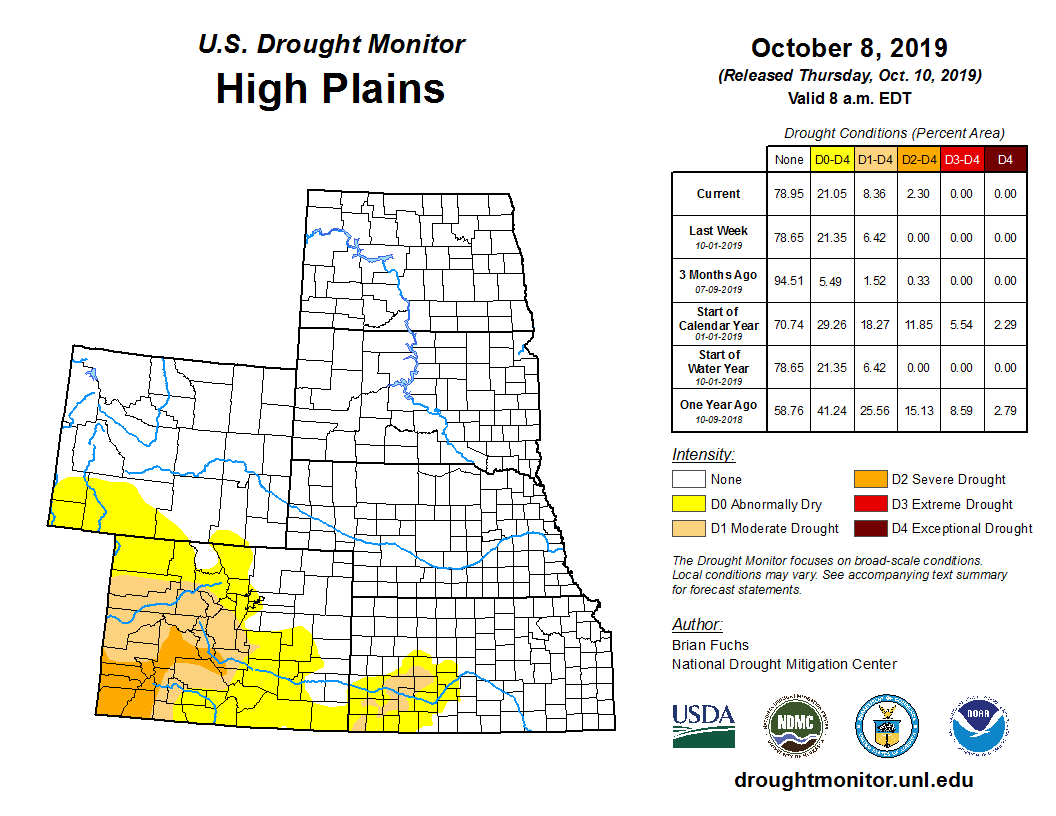 The flash drought in the southern portions of the United States, especially over the Southeast and Texas, remains the prominent feature this week. As conditions continue to dry out coinciding with record warmth, deteriorations are widespread and rapidly occurring.

Two prominent rain events came through the country in the last week. The first occurred at the beginning of the period when much of eastern New Mexico, west Texas and the Texas panhandle received rain and thunderstorms. A significant rain event moved through the southern Midwest and into the South, not only putting a stop to further drought development but also allowing for widespread improvements. Unfortunately, these rains did not get into the Southeast, where another hot and dry week continues to raise havoc on the region, especially to those involved in agriculture.

Cooler than normal temperatures and the first freeze for the season were widespread throughout the region. Temperatures were 3 to 6 degrees below normal for most of the area. Above-normal precipitation was recorded over much of the Dakotas, eastern Nebraska and most of Kansas. Drier than normal conditions were reported over Colorado, western Nebraska, and southwest South Dakota. The region had abnormally dry conditions expand over eastern Colorado and slight improvement to the abnormally dry conditions over western Wyoming.

Temperatures were cooler than normal over the upper Midwest with departures of 3 to 6 degrees below normal while the southern and eastern portions of the region had above-normal temperatures with departures of 6 to 9 degrees above normal. Ohio had their warmest September ever while Kentucky and Missouri had their second warmest ever. Kentucky also had their driest September ever while Illinois had their 25th wettest September ever. Significant rain came through the region and allowed for several improvements, but the areas that missed these rains in southern Illinois, southern Indiana, and Ohio continued to dry out, especially with the warmer than normal temperatures. Abnormally dry conditions were eliminated in northern Illinois and into northern Indiana. Moderate drought was improved over the “thumb” of Michigan while some of the newly introduced (last week) abnormally dry conditions in southern Missouri were improved this week. A full category improvement was made to drought conditions over much of Kentucky and the southern edges of Illinois, Indiana, and Ohio.

Mississippi had their driest September on record and Tennessee had their second driest while Texas and Louisiana had their warmest Septembers. Oklahoma, Arkansas, and Mississippi had their second warmest. Significant rains over portions of west Texas and into the panhandle, northern Arkansas, southern Arkansas and northern Louisiana as well as much of western Tennessee allowed for some improvements in the region. Abnormally dry conditions were removed over much of the Texas panhandle and into west Texas. Moderate drought was also improved upon over the far northeast portion of the Texas panhandle and into western Oklahoma.

A full category improvement was made over southern Arkansas and into northern Louisiana. A full category improvement was made in western Tennessee, northern Mississippi, and northern Alabama where the greatest rains fell. In the areas not impacted by rain, the warmer than normal temperatures along with dry conditions allowed for the flash drought to continue. Widespread degradations were made over Texas where areas of severe and extreme drought were expanded greatly. In central and southern Louisiana, abnormally dry conditions spread southward while a new area of moderate drought was introduced over eastern Mississippi.

Cooler than normal temperatures dominated the region, with areas of Idaho, Nevada, Oregon, and Utah having temperatures 6 to 9 degrees below normal. Warmer than normal temperatures were experienced in New Mexico, where departures were 3 to 6 degrees above normal. Precipitation was widespread through central and eastern New Mexico and spotty throughout the Pacific Northwest and northern Rocky Mountains. The precipitation in New Mexico did allow for a full category improvement to the abnormally dry conditions in the southeast, east, and southwest portions of the state.

In Arizona, further assessment of last week’s rain was done, with some further improvements made. Moderate drought and severe drought conditions were improved slightly in the central to south central portions of the state where the greatest impacts of the previous rains were observed. Due to a recent wet pattern, moderate drought and abnormally dry conditions were improved over the panhandle of Idaho, northeast Washington and northwest Montana.