This group of farmers from around the world gathered at the Global Farmer Roundtable during the 2016 World Food Prize in Des Moines, Iowa, to discuss challenges facing farmers around the world. (Journal photo by Jennifer Carrico.) 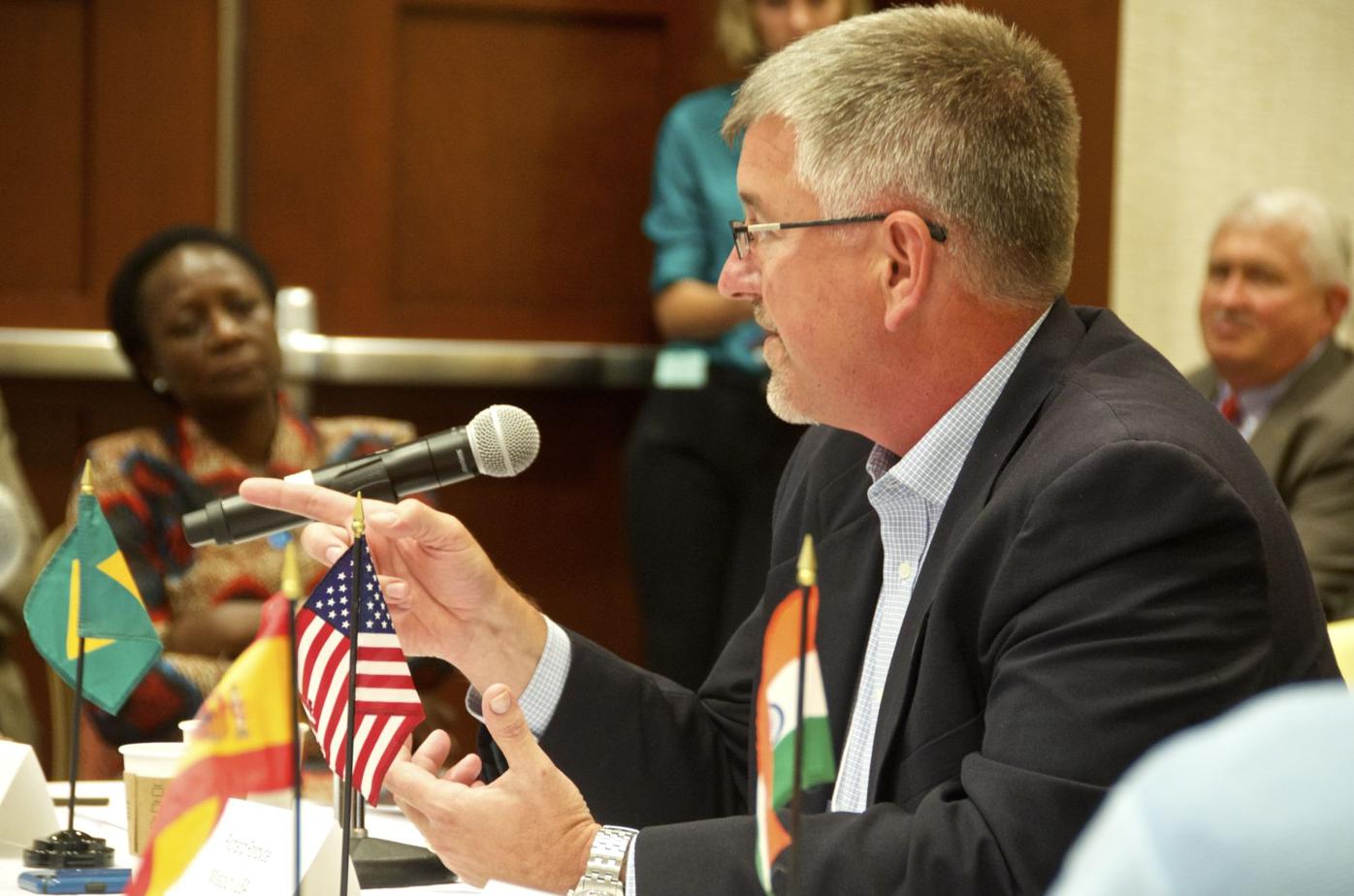 Richard Fordyce is a fourth-generation Missouri grain and cattle farmer. He also serves as the director of the Missouri Department of Agriculture. (Journal photo by Jennifer Carrico.) 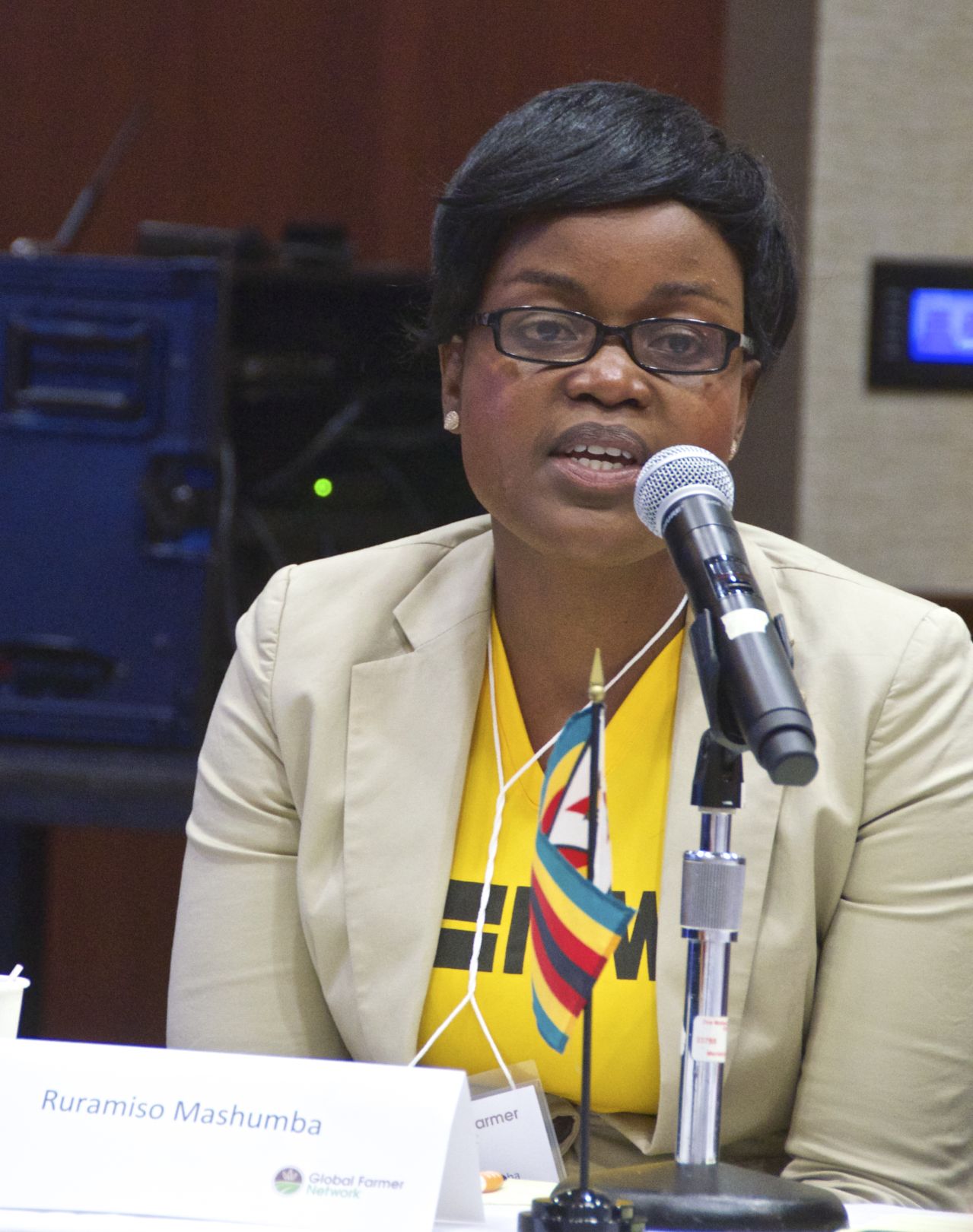 Ruramiso Mashumba grows peas for export and has a plantation of gumtrees, and she also raises some small grains and breeding cattle. She is recognized for leading African women toward mechanized farming. (Journal photo by Jennifer Carrico.) 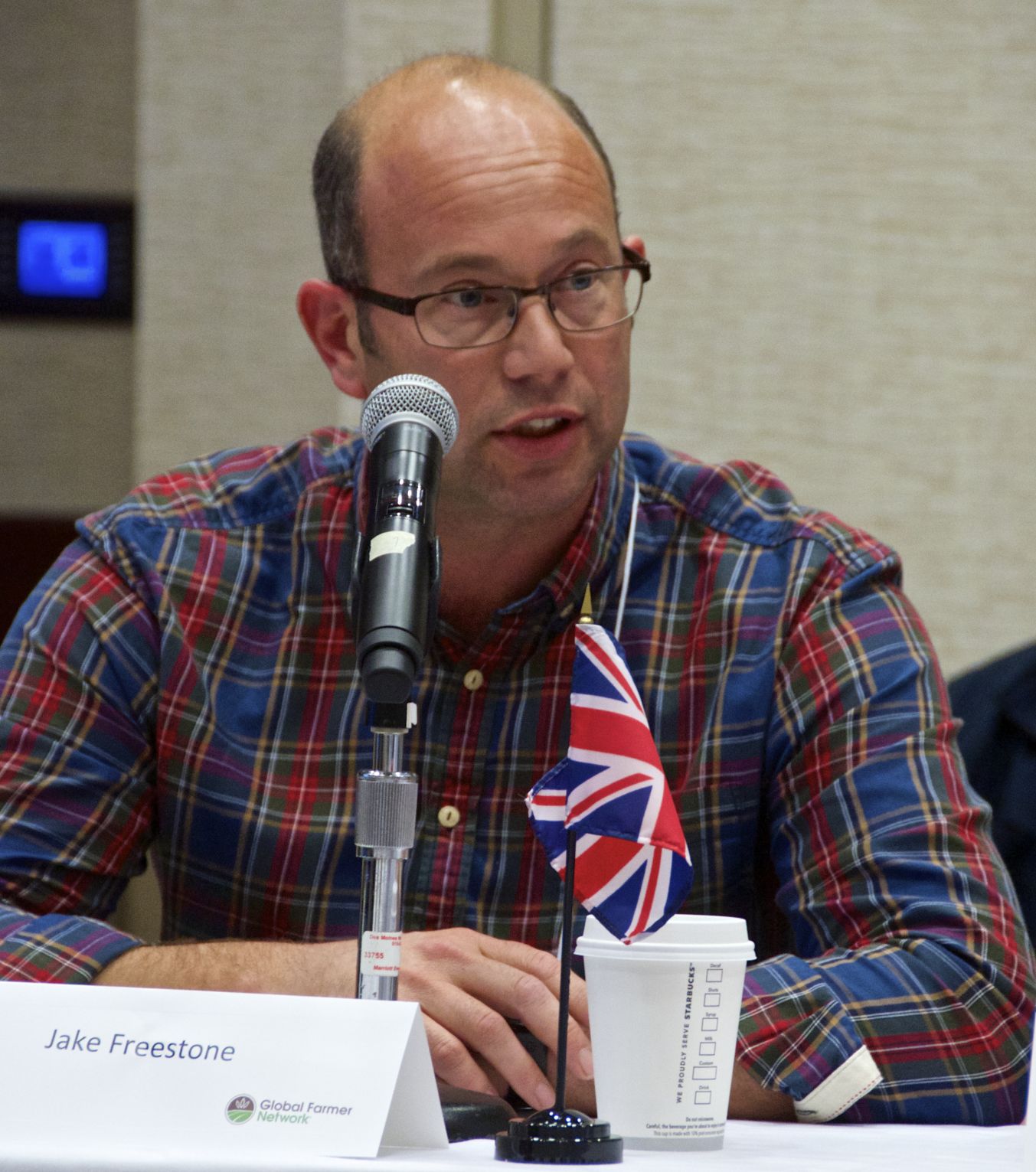 Jake Freestone is the farm manager of a large grain and sheep farm in the United Kingdom. They have converted 90 percent of the land to zero tillage. (Journal photo by Jennifer Carrico.)

This group of farmers from around the world gathered at the Global Farmer Roundtable during the 2016 World Food Prize in Des Moines, Iowa, to discuss challenges facing farmers around the world. (Journal photo by Jennifer Carrico.)

Richard Fordyce is a fourth-generation Missouri grain and cattle farmer. He also serves as the director of the Missouri Department of Agriculture. (Journal photo by Jennifer Carrico.)

Ruramiso Mashumba grows peas for export and has a plantation of gumtrees, and she also raises some small grains and breeding cattle. She is recognized for leading African women toward mechanized farming. (Journal photo by Jennifer Carrico.)

Jake Freestone is the farm manager of a large grain and sheep farm in the United Kingdom. They have converted 90 percent of the land to zero tillage. (Journal photo by Jennifer Carrico.)

The continual question heard in the agricultural industry is how will we feed 9.5 billion people by the year 2050? Farmers from all around the world discussed this and other agricultural issues during the Global Farmer Roundtable held during the 2016 World Food Prize in Des Moines, Iowa.

Jane Smith, a sheep beef and forage farmer from New Zealand, said the average age of the farmer in her country is 62 years old. “We need to make it more attractive for the young people to come back into farming and the first way to do that is to make sure farming is profitable,” said Smith.

Bishnu Hari Poudyal, a dairy and grain farmer from Nepal, agreed, “The younger generation leaves for education and don’t want to return to farming. It’s more of a social issue for us. And we need to make sure there are profits to make it more attractive.”

In Mexico, fifth-generation farmer Georgina Gutierrez said while they can take advantage of cheap labor, it is still hard to find the people who will physically do the work.

Ruramiso Mashumba, a farmer from Zimbabwe, said the problem in her country is they haven’t embraced technology quickly enough.

“We still plant most of our crops by hand, which is very labor intensive and unattractive to most people, but we still have to get our crop in,” said Mashumba.

In Brazil, farming has always been thought of as a noble act and many are starting to get back into farming, according to Lúcio Alamy, a pork, beef and coffee producer.

“Farming needs to get back to a community activity and then all the people will understand why it is so important,” said Alamy.

Missouri grain and cattle farmer, Richard Fordyce, said that in the U.S., labor is a key issue when it comes to agriculture. Fordyce also serves as the director of the Missouri Department of Agriculture.

“What we are asking people to do on our farms is a lot. To get good quality people, farmers like to hire those who are trained, but these workers also require a higher salary,” said Fordyce. “Migrant workers are used in some areas of the U.S., but we also know that the employees can have little error in their job. It is a lot to ask.”

Fordyce, a fourth-generation farmer, said, “The younger generations are starting to see the excitement in agricultural jobs, but skilled labor is still hard to find. I don’t think that’s a problem just in the U.S., but all around the world.”

Alamy said ads are run in all media outlets in Brazil to make agriculture and farming look more attractive to all people in hopes of getting more interested.

Farmers around the world don’t always get the praises they should for raising high quality products. Consumers want specifics, but don’t always realize the economics behind those practices.

Jake Freestone, a farm manager of a large grain and sheep farm in the United Kingdom, said the consumer in the U.K. wants the farmers to produce basically everything organically.

“Organic production can be so challenging. We want to produce high quality food, but make a profit. Cheap food versus not affecting the environment is a tight rope to walk,” said Freestone.

Smith agreed, “We have a lot of compliance costs in New Zealand, but the demand for cheap food is big. Meeting regulations and staying in compliance is very difficult.”

Fordyce said U.S. farmers realized about seven years ago food had to be produced with a social license with consumer understanding.

Soil management is difficult in many areas around the world. Freestone said the U.K. continues to plow the soil, but has also started to use cover crops to help preserve the nutrients.

“We tend to see changes made reactionary instead of proactive,” said Freestone. On the farm he manages, 90 percent of the 1,560 hectares has been converted to zero tillage.

Technology in the U.S. has allowed farmers to preserve soil better. While each state does things a little differently, Fordyce said the Midwestern states have been very proactive with limiting soil erosion to increase soil and water quality.

Freestone installed a global positioning system in his first tractor in 2006. He said this has helped improve their farming because the worker can concentrate on what’s happening behind the tractor, whether it is planting, spraying or harvesting, and doesn’t have to concentrate as much on what is happening in front of the tractor.

“It did cost a lot to implement our new robotic system, but dairying is hard work that has to be done every day of the year and this was a way to improve my work/life balance and be able to spend more time with my family is not in a working situation,” said VanOord.

In Nepal, Hari Poudyal said he has found a better way to keep cows clean through a system that separates urine and manure. His operation also feeds cows individually to make each more efficient, as well as using artificial insemination to improve genetics and production.

Smith said in New Zealand technology has helped farmers understand why things are happening on the farm and how it is improving efficiency.

“Some of the wool clothing produced in New Zealand has a tag consumers can scan and be connected with the producer where the wool came from. This has helped with consumer relations for the sheep industry,” said Smith. “Nothing can replace the knowledge farmers have of their land and animals and if consumers can see that, it becomes more acceptable.”

In Canada, VanOord said agricultural groups have started calling parents to get kids out to an agricultural event. It’s difficult to get farmers to leave their farm and come to an event, which has been a continual problem, but he said finding a way to get a different generation from the same farm to the event can sometimes be the key to success.

Smith said the best way she has advocated agriculture in New Zealand is to introduce herself as a mother of three and a farmer. When she says she is a parent, other parents can relate and realize Smith makes decisions that are best for her family.

Fordyce said agricultural commodity groups in the U.S. are doing a better job of coming together with a message to inform consumers. “The Center for Food Integrity is figuring out what resonates with consumers. That information helps us get the personal message across that is valuable for and to consumers. We have to have a collaborative effort to deliver the agricultural message in a positive way,” he said.

The bottom line is that farmers all around the world have a priority to their farm. Using the tools and technology available to them to improve efficiency and profits while being environmentally aware is how each farmer will be successful, even though that looks different in every part of the globe.