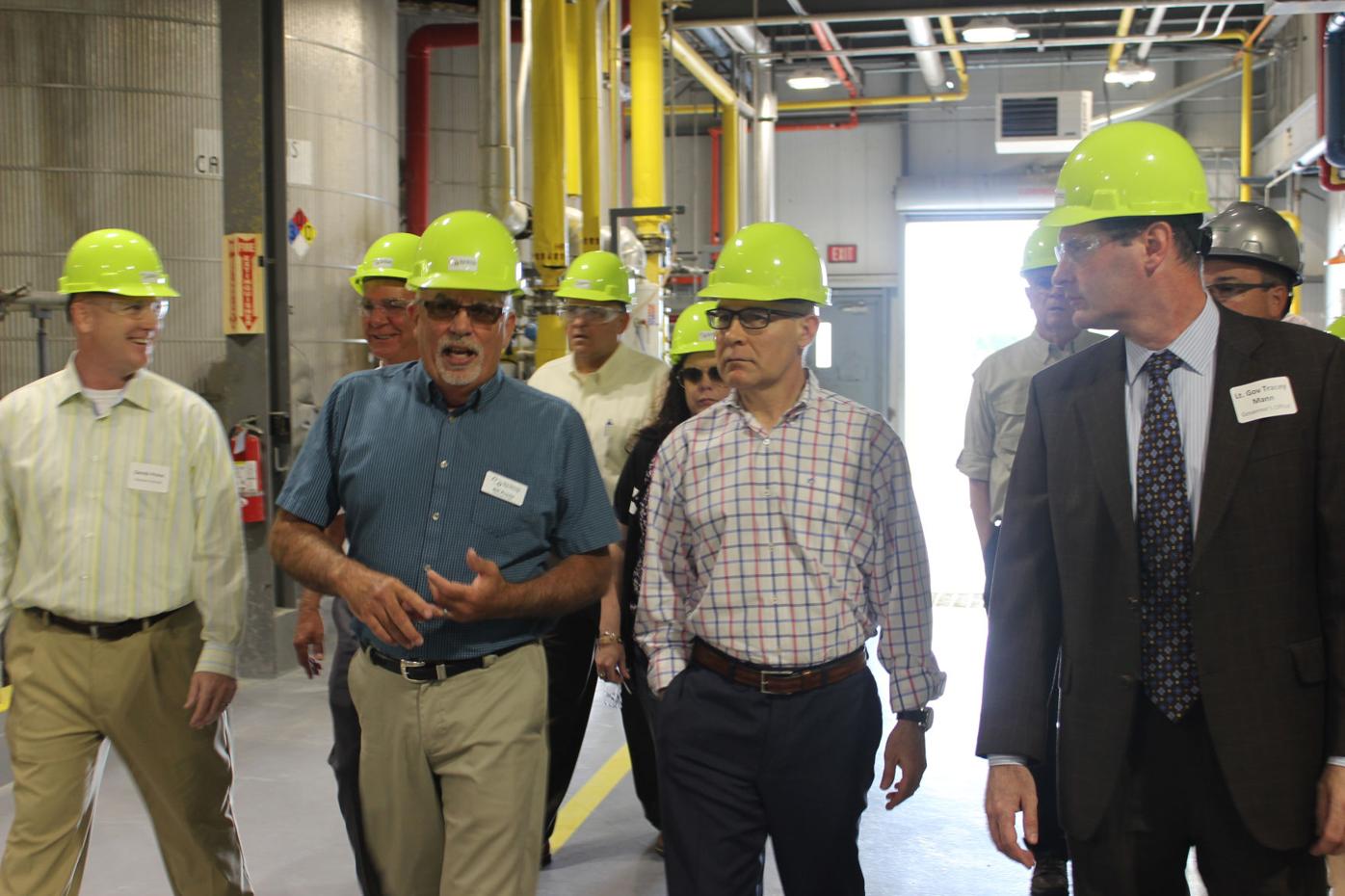 EPA Administrator Scott Pruitt, second from right, toured the East Kansas Agri-Energy with, from left, Western Plains Energy CEO Derek Peine, EKAE CEO Bill Pracht and Lieutenant Gov. Tracy Mann, right. It was Pruitt's first visit to an ethanol plant since taking the post last year. Farmers let Pruitt know about their concerns regarding how he is administering the ethanol mandate and the waivers his agency is granting for small refineries. (Journal photo by Amy Bickel.) 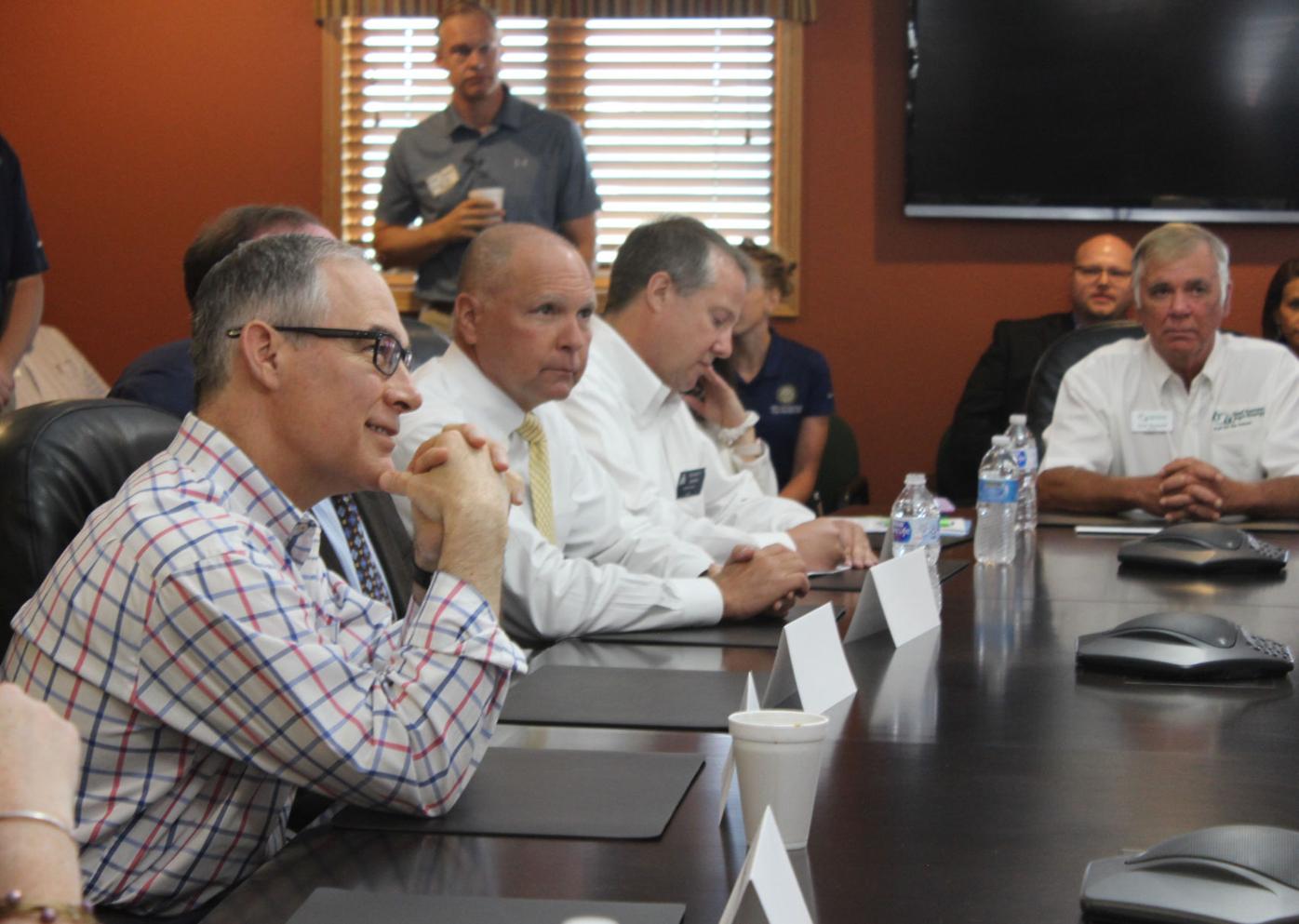 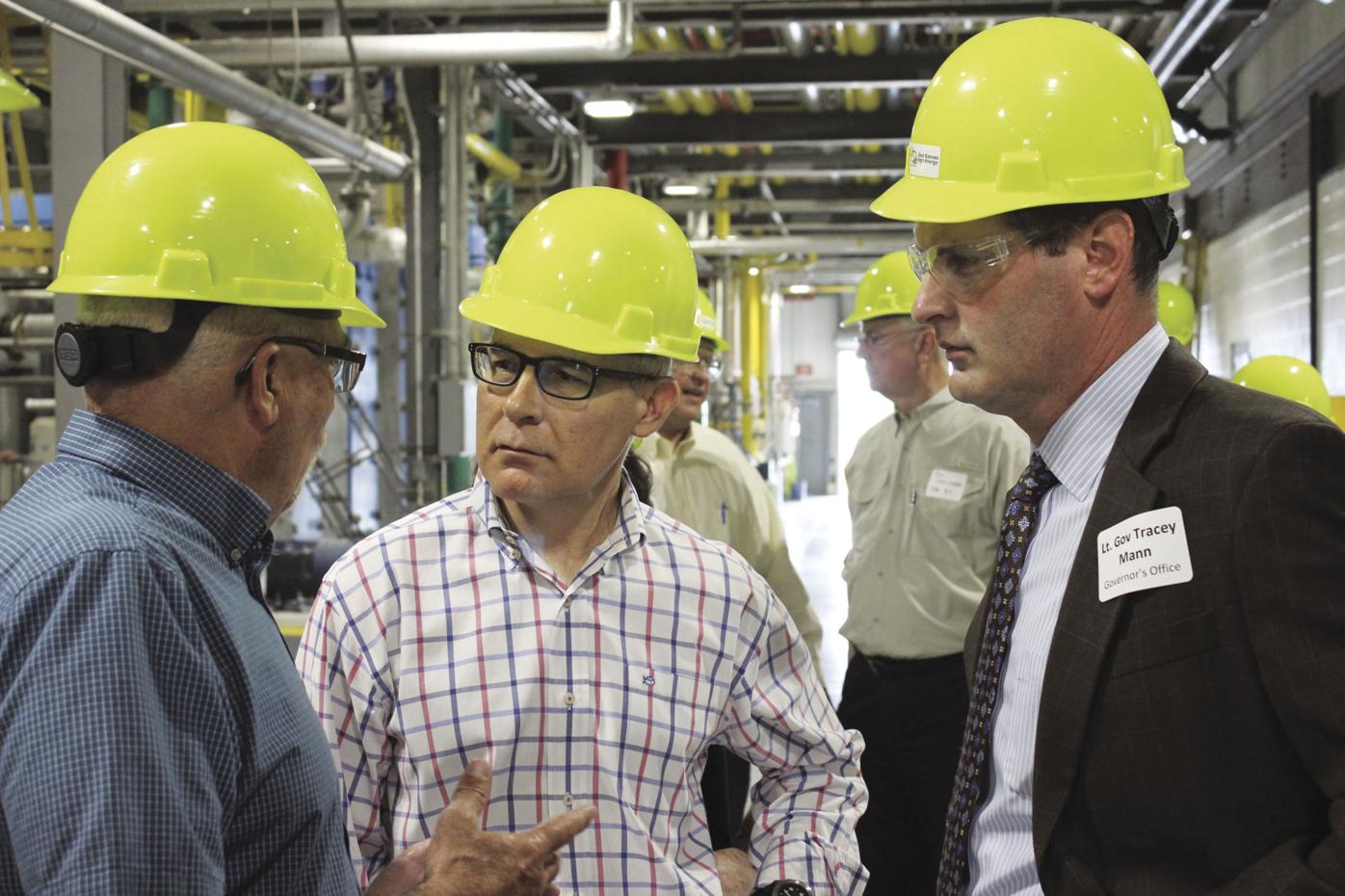 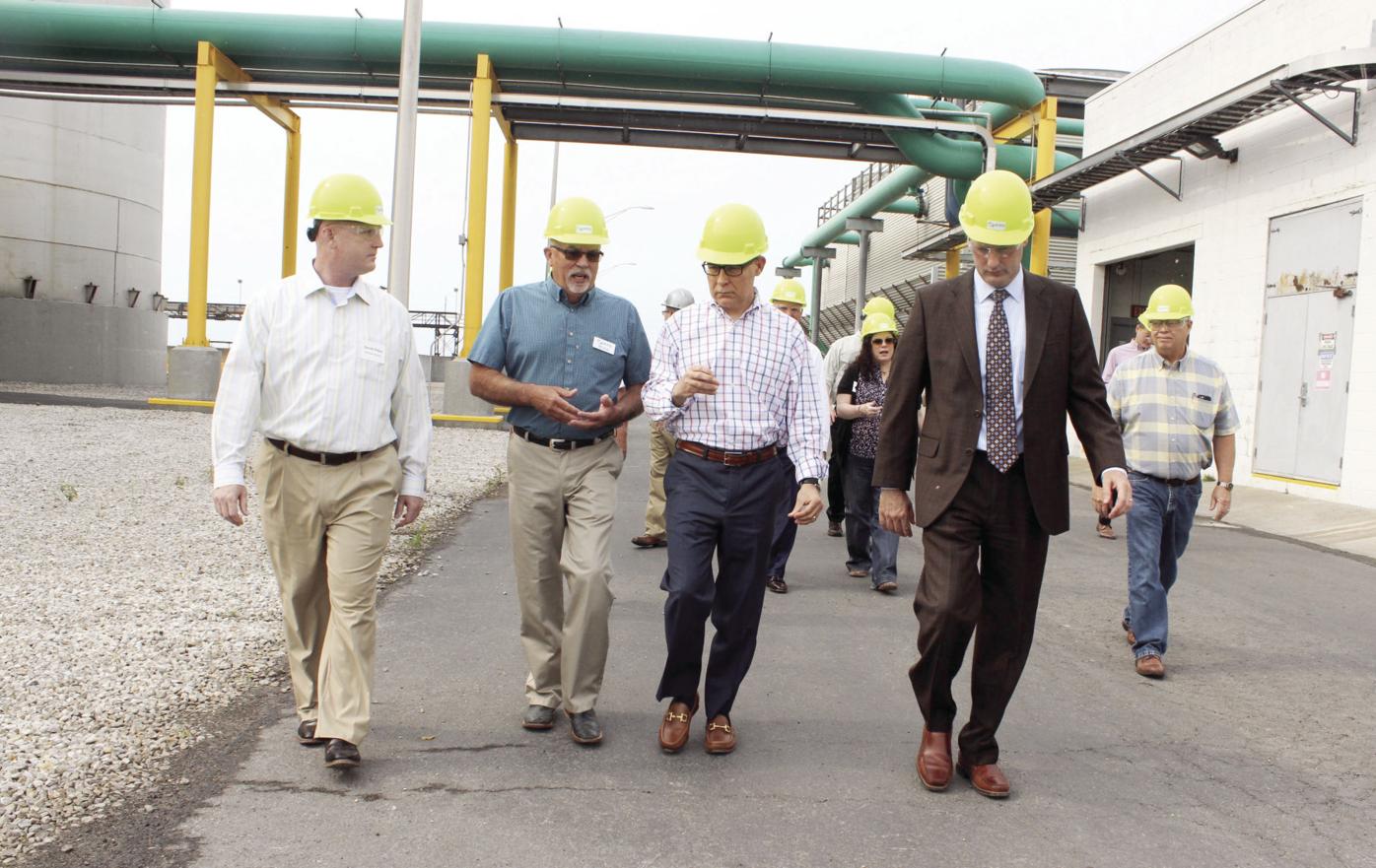 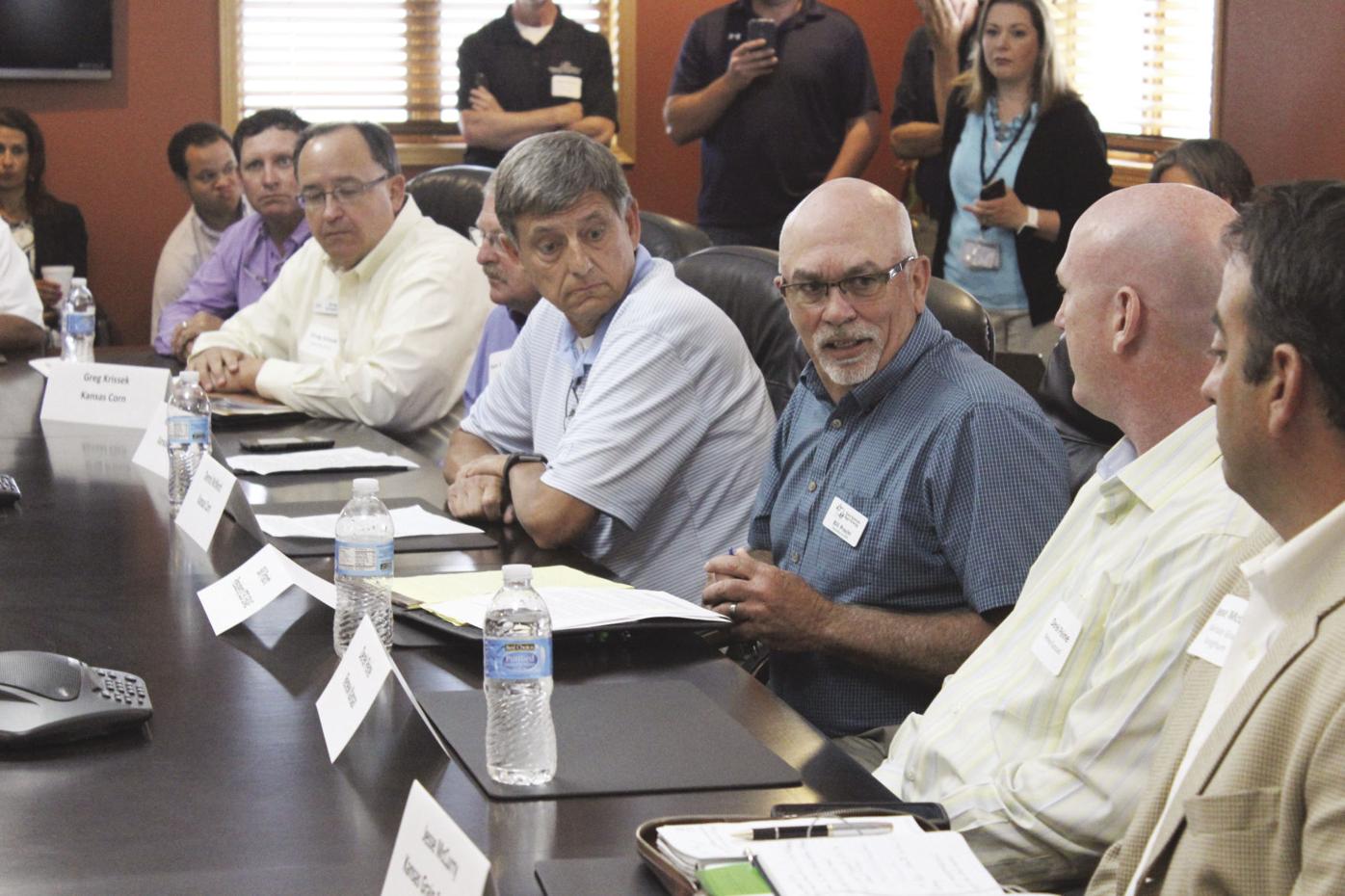 East Kansas Agri-Energy CEO Bill Pracht said it took a year to raise the funds to build the ethanol plant. “It’s that same spirit that drives all of us in this industry to champion what we think is right about the RFS,” Pracht told Pruitt. “Also we are going to use that same spirit to call it out when we think things are not going right.” (Journal photo by Amy Bickel.) 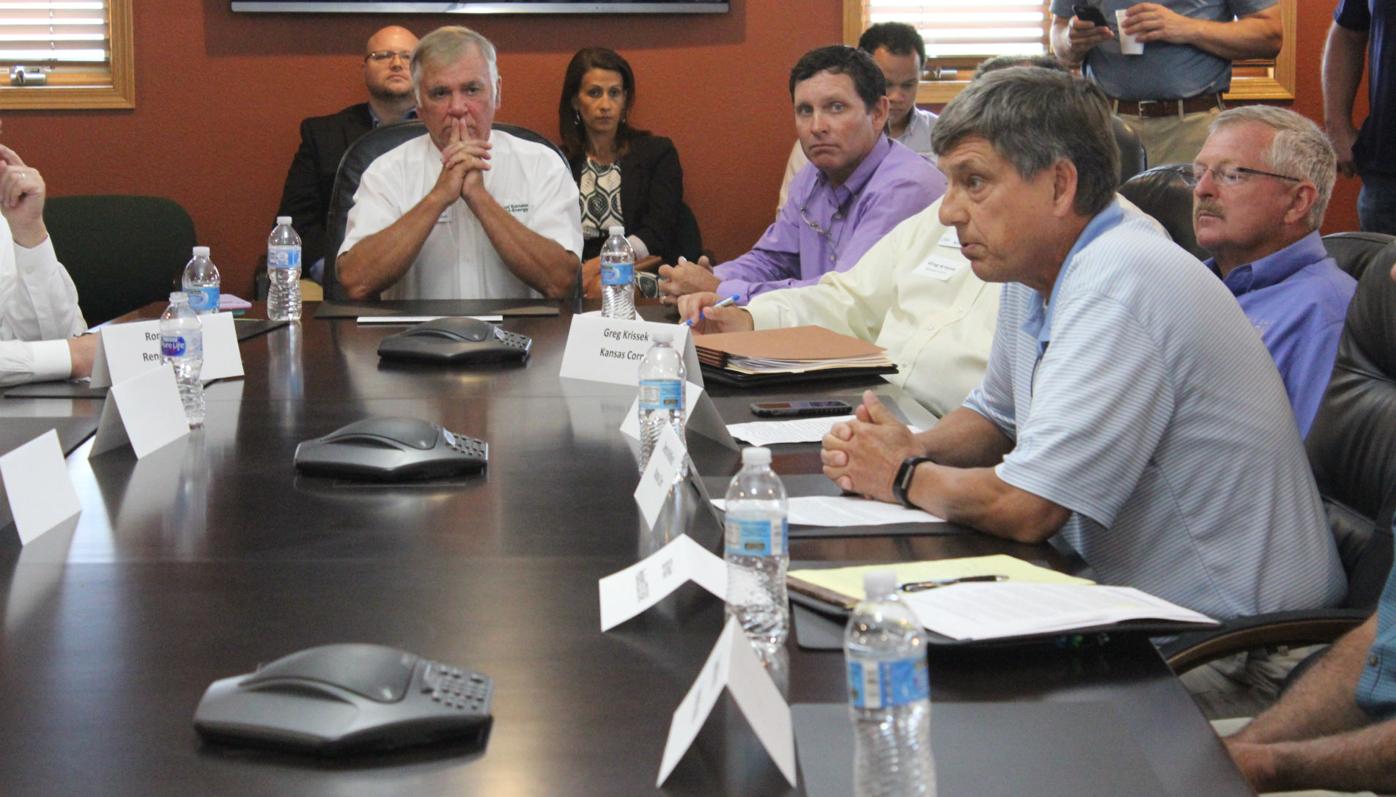 Corn grower Dennis McNinch admitted he should be at his farm, helping his son amid the busy season.

Yet, McNinch drove five hours from his home in Ness County, Kansas, to an ethanol plant in Garnett, June 12, to give Environmental Protection Agency Administrator Scott Pruitt a piece of his mind.

“Quite frankly, we are mad as hell at you,” said McNinch, echoing the concerns of other corn growers and ethanol industry leaders across the nation—that Pruitt and the EPA are “undermining” the Renewable Fuel Standard, which could plunge an already struggling farm economy further in the hole.

Pruitt—the former attorney general for Oklahoma, a state that ranks in the top 10 for oil production—is under scrutiny by the ag industry for his handling of the biofuel mandate and his perceived close friendship with “big oil.”

However, in an invitation-only visit opened to just a few members of the press, Pruitt made his first trip to an ethanol plant since taking office. He toured East Kansas Agri-Energy in Garnett, then sat down at the table with farmers and ethanol officials.

“I think it is important that you hear what I have to say,” McNinch said. “Your boss, our president, claims to be the victim of fake news. As a corn farmer and investor in the ethanol industry, I know all too well about fake news.

“Since the inception of the RFS, we have been the target of fake news from your friends in the oil industry. And every turn, the oil industry has created various scare tactics to try to turn the American consumer against us. These tactics have included such falsehoods of food versus fuel, that the engine would be harmed by ethanol usage and that our carbon footprint was too large.”

Now farmers are again under attack regarding RFS as they struggle to make ends meet, McNinch said.

“Our industry is on the cusp of financial ruin in many areas of the country,” he said.

At issue is a federal law designated to protect smaller refineries from economic hardship from the ethanol mandate, which requires a certain amount of ethanol be blended into the fuel supply annually. Refineries that can’t or don’t want to add biofuel must purchase renewable identification numbers, or RINS, from other refineries who do blend biofuels.

A small refinery is one that produces no more than 75,000 barrels of crude oil a day.

The oil industry has fought to repeal the measure over the years, citing financial burdens. Since taking office, Pruitt and his staff have handed out 24 waivers.

That is a record number, said Bill Pracht, the ethanol plant’s CEO.

Pracht and others in the room reminded Pruitt that President Donald Trump promised Midwest farmers on the campaign trail he would protect the mandate.

“I’m just going to be blunt,” said White Cloud, Kansas, farmer Ken McCauley, who noted Pruitt’s stance on RFS and the RIN market isn’t just hurting ethanol plants. “It is hurting the farmers across the whole country. It is hurting the consumers who buy the gasoline.”

Pruitt defended his agency’s actions. Past agency leadership didn’t follow proper guidelines, he said. Under the Obama administration, the threshold for obtaining a RIN was bankruptcy. The current administration interprets the law differently because of legal rulings allowing refiners to only show financial hardship. The EPA now works with the Department of Energy to examine each refinery exemption request and make a recommendation.

Pruitt did not articulate the criteria needed for a financial hardship, however.

“The reason (waivers) have increased is the instability of the RIN market,” Pruitt said, later adding, “The reason there is more being granted is because there have been more applications because of the cost of RINs and the standards have changed. Those are facts. Not because of some intent that we have to abridge the purpose of RFS.

“To say the small refinery exemption was something that is being used in a way that was weaponized is simply not the case,” Pruitt said.

Pracht, however, asked for more clarity and transparency regarding the EPA interpretation. Big oil companies like Chevron and Andeavor aren’t small, he said, noting Andeavor made $1.5 billion in profit last year.

Pruitt said waivers are granted on a facility-by-facility basis, and by those definitions, these aren’t big oil companies applying for the waiver.

Pracht didn’t agree with Pruitt’s assessment, saying those big companies are still among the ones applying for the waiver.

The industry has lost more than a billion gallons of ethanol demand because of the waivers, Pracht said.

“It is very apparent that we have less ethanol in the gasoline industry today than a year ago,” he said.

Pruitt and the EPA recently proposed extending RINs to ethanol for export. McCauley, Pracht and others said they opposed the move.

“Attaching RINs to export gallons of ethanol will flood the market with nearly 2 billion additional RINs each year, which will further destroy the value of domestic RINs,” Pracht said.

Pruitt did offer some encouragement. He discussed reallocating waived RINs to refiners back to the RFS obligations so demand for biofuels wouldn’t be hurt.

Also, Pruitt seemed confident of the EPA issuing a Reid Vapor Pressure, or RVP, waiver for E15 fuel. This would permit the year around sales of E15, which would encourage domestic production and help the RIN market.

Under current guidelines, vehicles cannot use E15 in the summer. Pruitt said he thought this action could be accomplished administratively.

“It is my belief that the statute permits it, and it is something we should embrace,” Pruitt said.

Meanwhile, he said the RFS pathway for sorghum biofuel production should be finalized in the next few weeks.

In Kansas, there was just one lone picketer, who stood at a distance from the ethanol plant property holding a sign.

Before leaving Kansas, Pruitt and his entourage made a stop at the Dedonder farm near Reading, in Lyon County, to talk about prescribed burning and the Clean Air Act.

The day after Pruitt’s visit, McCauley said he left the meeting feeling some encouragement.

“I really think it went well—for the administrator, a high-profile guy to come here, knowing everyone was against him,” he said. “Comments were made. He answered them in a nice way, and he had answers for most of our stuff.”

However, he said, the industry must continue to remind Pruitt of his promises he made in Kansas.

“We can’t take anything for granted because of comments yesterday,” McCauley said. “He doesn’t have to do any of it. There are a lot of things that have to line up before most of that can happen.”