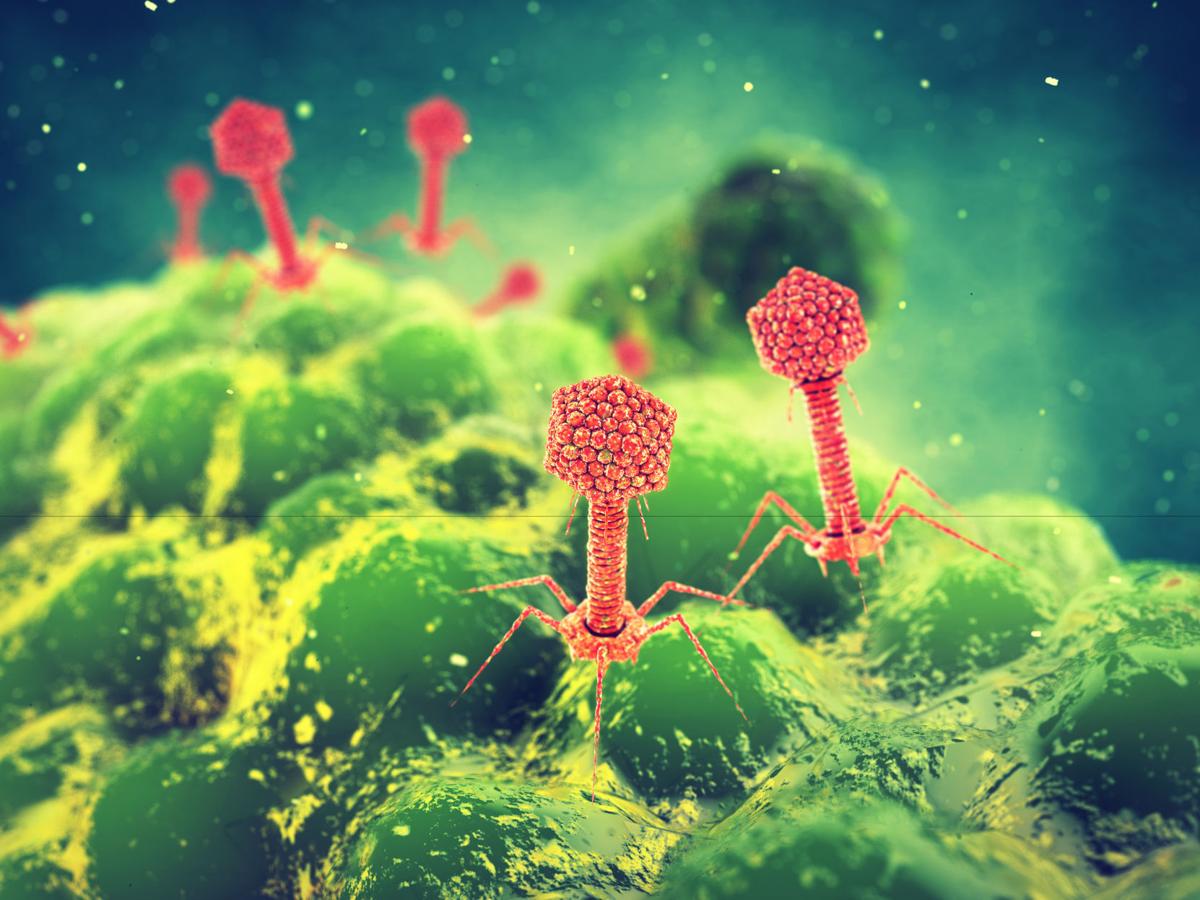 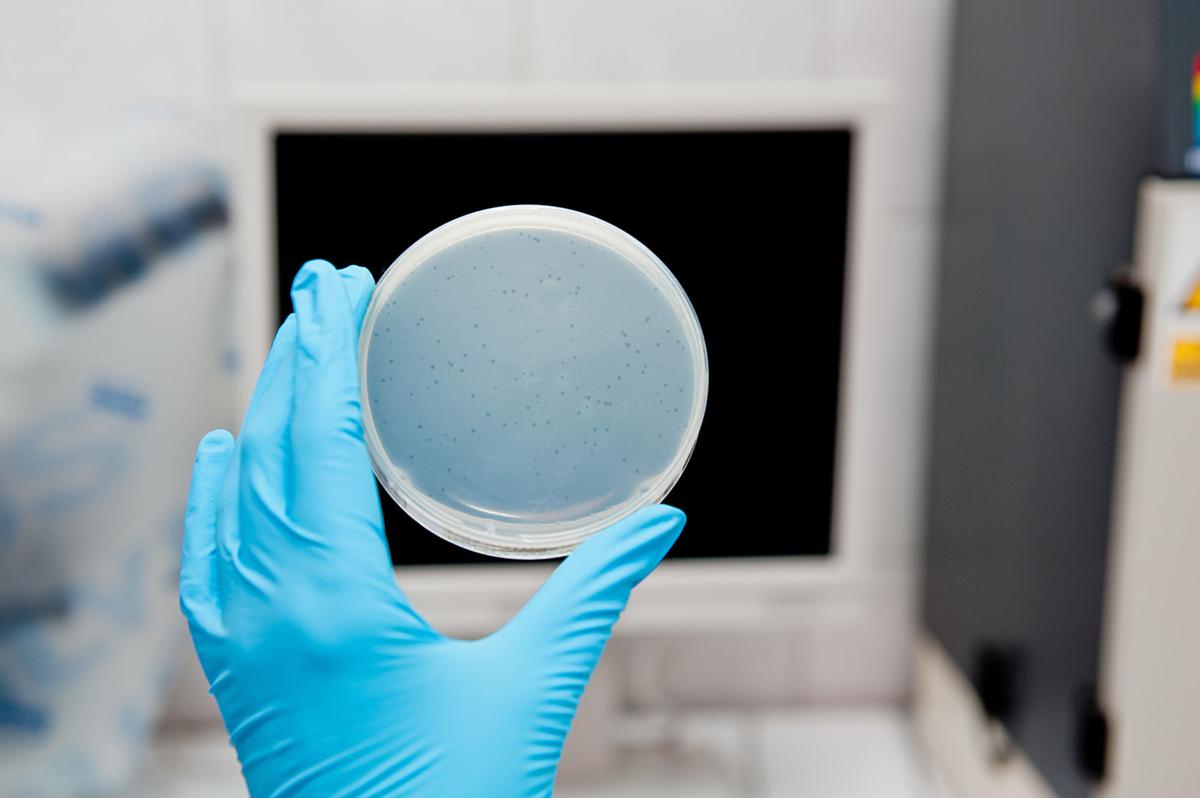 This photo shows an agar plate and bacteriophages in biotech lab. 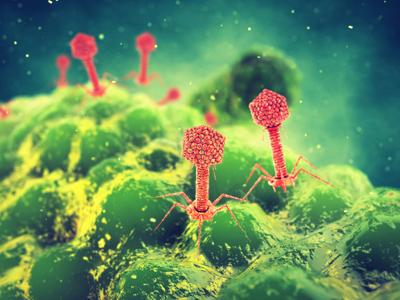 Getting the flu is the pits; with fever, chills, muscle aches, cough, congestion, headaches, runny nose and fatigue, it wears sufferers down. Infections are not much better, but what if there was a way to cast this same agony on the bacteria? Surprisingly enough, Mother Nature whipped that up a long time ago and scientists are working hard to utilize these microbial warriors, called bacteriophages, as alternatives to antibiotics.

Bacteriophages are naturally occurring viruses that prey upon, destroy and replicate within bacteria. They kill bacteria and other pathogens, but do not affect humans adversely and bacteria are not able to develop a resistance toward them.

They have co-evolved with bacteria on this planet and can be found in soil, water and anywhere else bacteria thrives. Bacteriophages are remarkable because every single bacterium has a phage enemy that can be found and turned against it. Luckily for us, bacteriophages are among the most common and diverse microbes in the biosphere.

According to Hari Shankar Kotturi, Ph.D., and professor of biology at the University of Central Oklahoma, about half of the bacteria on this planet are killed by bacteriophages every two days.

“In the environment, phages launch approximately 1024 infections per second,” Kotturi said. “It is estimated that phages outnumber bacteria by 10 to 1 with a global population of 1031 particles. Additionally, bacteriophages play an essential role in recycling carbon present in bacteria.”

Kotturi teaches microbiology and virology at UCO and his students have the opportunity to isolate and purify bacteriophages from local environmental samples.

However, the discovery of these wonder viruses is nothing new—scientists and doctors started using bacteriophages to treat infections about 100 years ago.

“Before we discovered antibiotics, phages were used by Felix d’Herelle in 1919 for treating chicken typhoid caused by the bacterium Salmonella gallinarium,” Kotturi said. “He also used bacteriophages for treating bubonic plague in 1920.”

However, bacteriophages were mostly set aside with the discovery of antibiotics. Now, with the issues surrounding antibiotic resistance, scientists are once again studying bacteriophages and developing phage therapies for humans and animals.

“There is a resurgence in using phages for treating human bacterial infections since 2017, due to the Tom Patterson case,” Kotturi said.

Patterson became ill with Acinetobacter baumannii, a superbug resistant to all antibiotics, while on vacation in Egypt in 2015. On the brink of death and after dozens of failed antibiotic treatments, Patterson was cured with the use of phage therapy suggested by his wife, Steffanie Strathdee, an infectious disease epidemiologist at the University of California. Since that case, Kotturi says there have been four to five studies that clearly show that bacteriophages can be used for treating human bone, skin and pulmonary infections without any side effects.

“In the coming decades, we will have a lot better understanding of bacteriophages and their application for human and animal health,” Kotturi said.

Additionally, those in the agriculture are eyeing phage therapy for the livestock industry as well.

For the cattle industry, antibiotics are a delicate subject. The drugs are costly for producers, many consumers are moving to organic food because of antibiotic use and many of the bacteria we treat with antibiotics are becoming resistant to them.

Fortunately scientists like Divya Jaroni, Ph.D., associate professor of animal and food sciences at Oklahoma State University, are working to find replacements for antibiotics. Jaroni started researching bacteriophages in 2013 with an emphasis in E. coli prevention and food safety. Right now, she is working with the OSU invention office to submit a patent for the phage therapy her team developed. They are also considering obtaining a trademark toward the mixture of phages they are using.

Jaroni says the usage of bacteriophages in food is picking up. E. coli and salmonella phages are being commercialized and her team is testing their phage developments against E. coli in food, such as fresh produce like spinach and lettuce. They are also looking at E. coli in food contact surfaces like stainless steel.

She says they plan to do more research pertaining to humans and animals within phage therapy. Additionally, Jaroni is one of the few researchers who is looking into using bacteriophages for E. coli in cattle and has already conducted some experiments and research with removal of E. coli through phages in the intestinal tract of cattle.

“We are in the beginning stages of finding out if we can use them in cattle or for other ruminants,” Jaroni said. “With the preliminary studies we’ve been doing in the lab, we grow intestinal cell lines in culture plates and then we attach E. coli to it and expose them to bacteriophages and see if they can remove the E. coli. We’ve been quite successful at that and we’ve see quite large reductions in E. coli.”

So far, her team has isolated 50 phages. They went to cattle operations and collected feces and water samples and isolated the phages against E. coli. Jaroni says with bacteriophages, to find the predator, scientists must first find the bait.

“The interesting thing about phages is that wherever the bacteria is that you want kill, that is also where to find the phage that kills it,” Jaroni said.

Once isolated, her team freezes and stores the bacteriophages so they can later be cultured and used in their experiments. Furthermore, bacteriophages are the cockroaches of viruses. Jaroni says they are resilient and almost always grow back when cultured.

Although she is at the beginning of her research in bacteriophage therapy and cattle, Jaroni says theoretically, bacteriophages could be fed to cattle orally in feed or water, much like a supplement, over their lifetime.

Antibiotic resistance is a greater problem than most fully comprehend and it will only continue to build at the rate antibiotics are currently being used.

“Once you have one or two microorganisms in the group that are resistant to that particular antibiotic, then they reproduce and their generation time is anywhere from 15 to 20 minutes, so within that time you can have a whole generation of bacteria that is resistant to antibiotics,” Jaroni explained. “That is now becoming a problem, especially in the livestock industry because antibiotics in the cattle industry are used mostly as a preventative and not as a therapy. Because they are being used at these subtherapeutic levels, we are finding more and more bacteria are becoming resistant.”

Jaroni says in the case of E. coli, which has no vaccine, if an animal has E. coli and the bacteria is resistant to antibiotics, and that animal is consumed by a human who then contracts E. coli, there would not be a treatment for the bacteria. The same goes for other bacteria like salmonellosis, or salmonella, staphylococcus aureus, commonly known as staph, and Methicillin-resistant Staphylococcus aureus, that is commonly known as MRSA.

“This is becoming quite a problem and in the past, people did not associate them with the animal industry, but now people are drawing more and more parallels—specifically to dairy cattle and staph aureus,” Jaroni said. “Whether people want to believe it or not, that same resistant that’s found in food animals, also filters through to humans when we consume them.”

Because of this, bacteriophages could be the perfect ammo to aim in the general direction of bacteria, which continues to find ways to overcome our wonder drugs.

Are phages the future for bacteria treatment?

It might seem like a no-brainer to utilize this invisible form of biological control that is all around us, but bacteriophages are a little more convoluted. They are different than antibiotics in the sense that unlike penicillin that treats a wide variety of infections, scientists have to find the correct bacteriophage that goes with a particular type of bacteria in order to kill it.

“Bacteriophages are very specific to the bacteria that they infect,” Kotturi said. “This specificity is governed by the interaction between phage ligands, which are proteins that are analogous to keys and bacterial host receptors comparable to locks. For the phage to be able to infect a specific host, the keys on the phage must match with the locks on the host cell. For example, we used normal soil bacteria to find our 65 bacteriophages, and when we tested the host range of these phages using human pathogens, only one of them can somewhat infect a human pathogen. As of now, the narrow host range of phages makes it challenging to use one type of phage against many or all bacteria.”

However, according to Kotturi, this may change in the future with engineered phages with a broad host range.

“Many of the bacteria that cause infections in poultry, swine, and cattle, belong to genus Clostridium, Pseudomonas, Staphylococcus, Pasturella, Mycoplasma and Mannheimia,” Kotturi explained. “For diseases that are caused by only one type of bacteria, bacteriophage therapy is a viable option. There are many published animal studies with bacteriophages for treating specific bacterial infections.”

However, some of the more prevalent diseases in the cattle industry are more complex to treat with bacteriophages. Kotturi says bovine respiratory disease, one of the most common and costly ailments of stocker cattle, and mastitis, the primary nemesis for dairy cows, are often caused by more than one type of bacteria. Both Kotturi and Jaroni agree that it would require a cocktail of different phages specific to each of the infecting bacteria to successfully treat these infections with bacteriophages.

“As a phage biologist, I am tempted to say bacteriophages are the answer to the antibiotic resistance problem,” said Kotturi. “However, the right approach is finding bacteriophages that can kill drug-resistant bacteria. Proper stewardship in using antibiotics, screening and discovering new antibiotics, and combination therapy with phage lysins or phage proteins that lyse the bacterial cell and antibiotics are other viable options.”

Right now, we are at war with bacteria and the loser of this battle cannot be us. In times of bloodshed, an advantage is often given to the side that comes up with the best artillery and deploying a weapon as potent as a bacteriophage could be land us the victory.