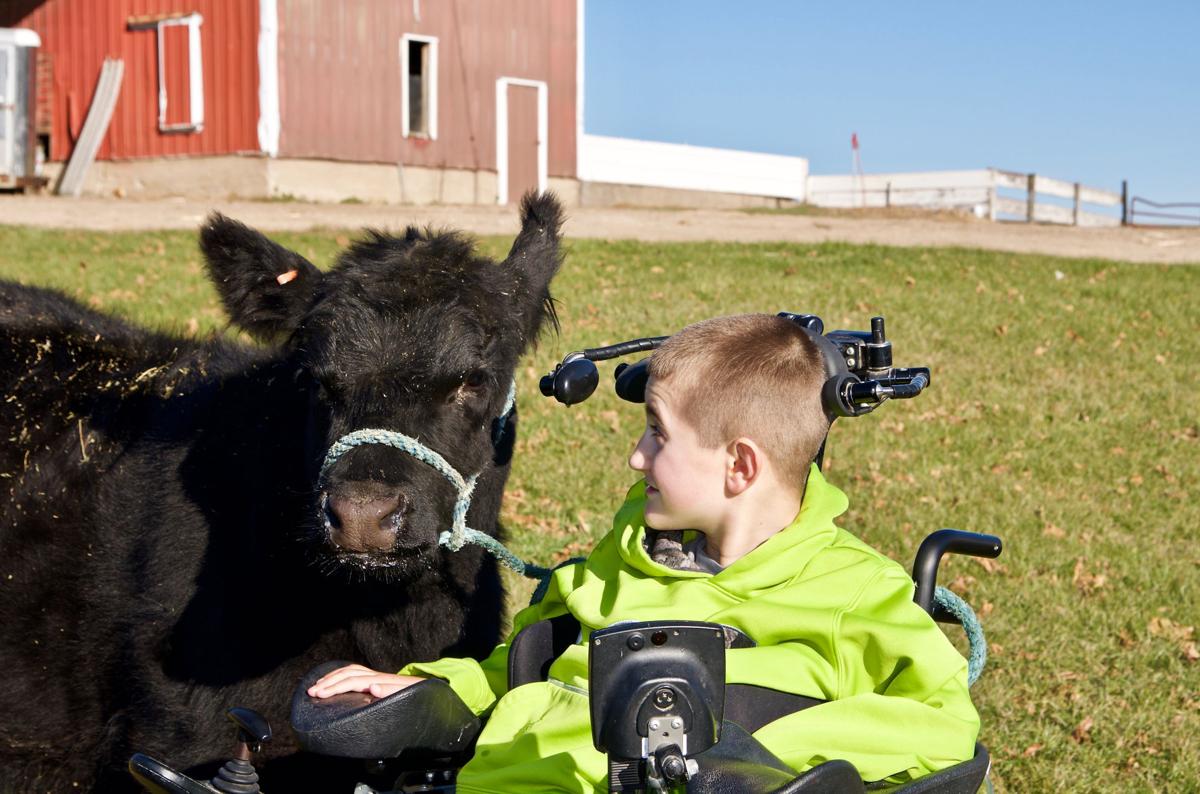 Many have seen the connection Alec Gotto had with his steer, J.D., last year. It seems he already has the same connection with his heifer, Spade, for the coming show season. (Journal photo by Jennifer Carrico.) 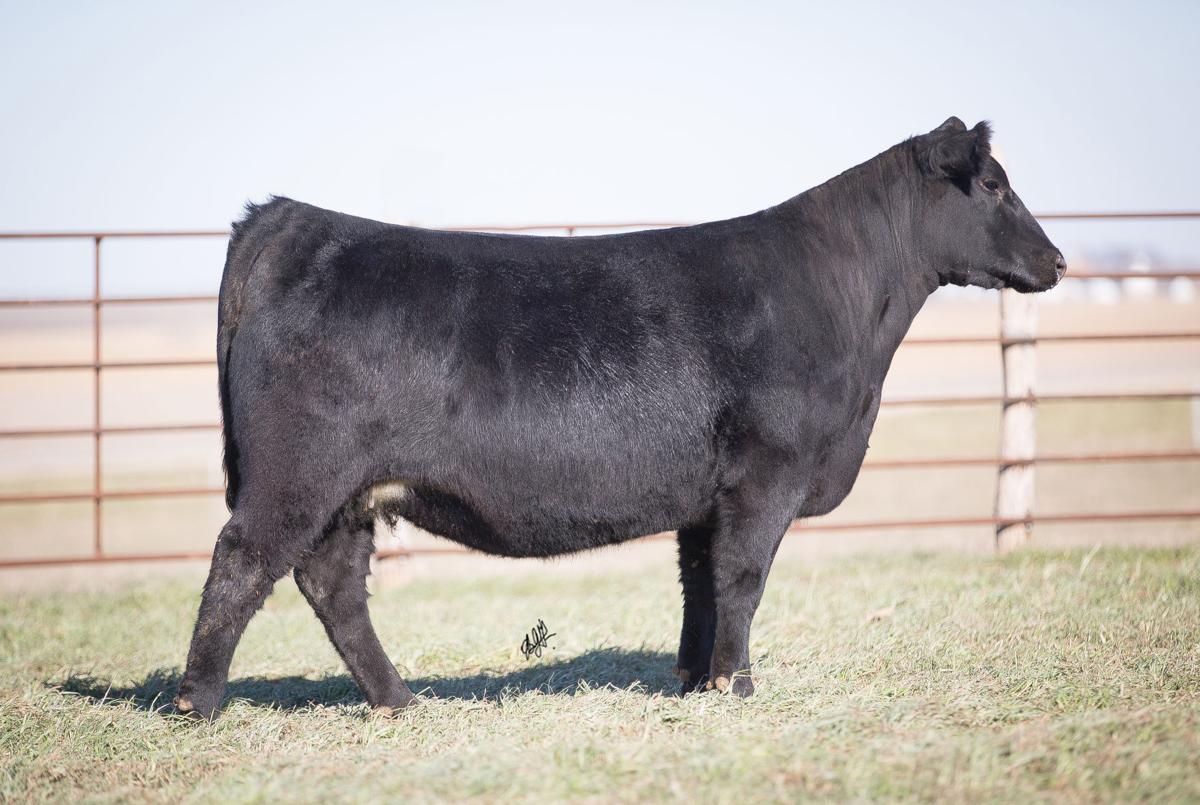 He really doesn’t like the attention, but after Alec Gotto led his steer J.D. into the ring at the National Junior Angus Show in Des Moines, Iowa, in July, the attention came his way.

“He is just like any other 12-year-old boy—he just happens to be in a wheelchair,” said Alec’s dad, Chad. “Everyone is very accepting of him and he loves interacting with others, especially when it involves cattle.”

At 8 months of age, Alec was diagnosed with transverse myelitis, in which his immune system attacked his spinal cord. Despite swift action by his parents, Chad and Carrie, to take him to the emergency room, the illness left him paralyzed. Alec has some feeling in his legs, but he is not strong enough to walk. He gets around with the use of an automatic wheelchair guided by using his head.

Carrie, who lovingly refers to Alec as “The Cow Whisperer,” said he was a cattleman as a baby and would get excited to be in the cattle yards and pastures with his dad.

Chad said they never thought about Alec wanting to show cattle until it was time for his cousin to pick out a calf to show at the county fair and Alec wanted to help. The next year, Alec had his own calf.

“It’s really hard to explain how it works for Alec to do this. It just does,” said Chad. “He doesn’t always get the best calf available. The calf has to have the right temperament and personality to work.” 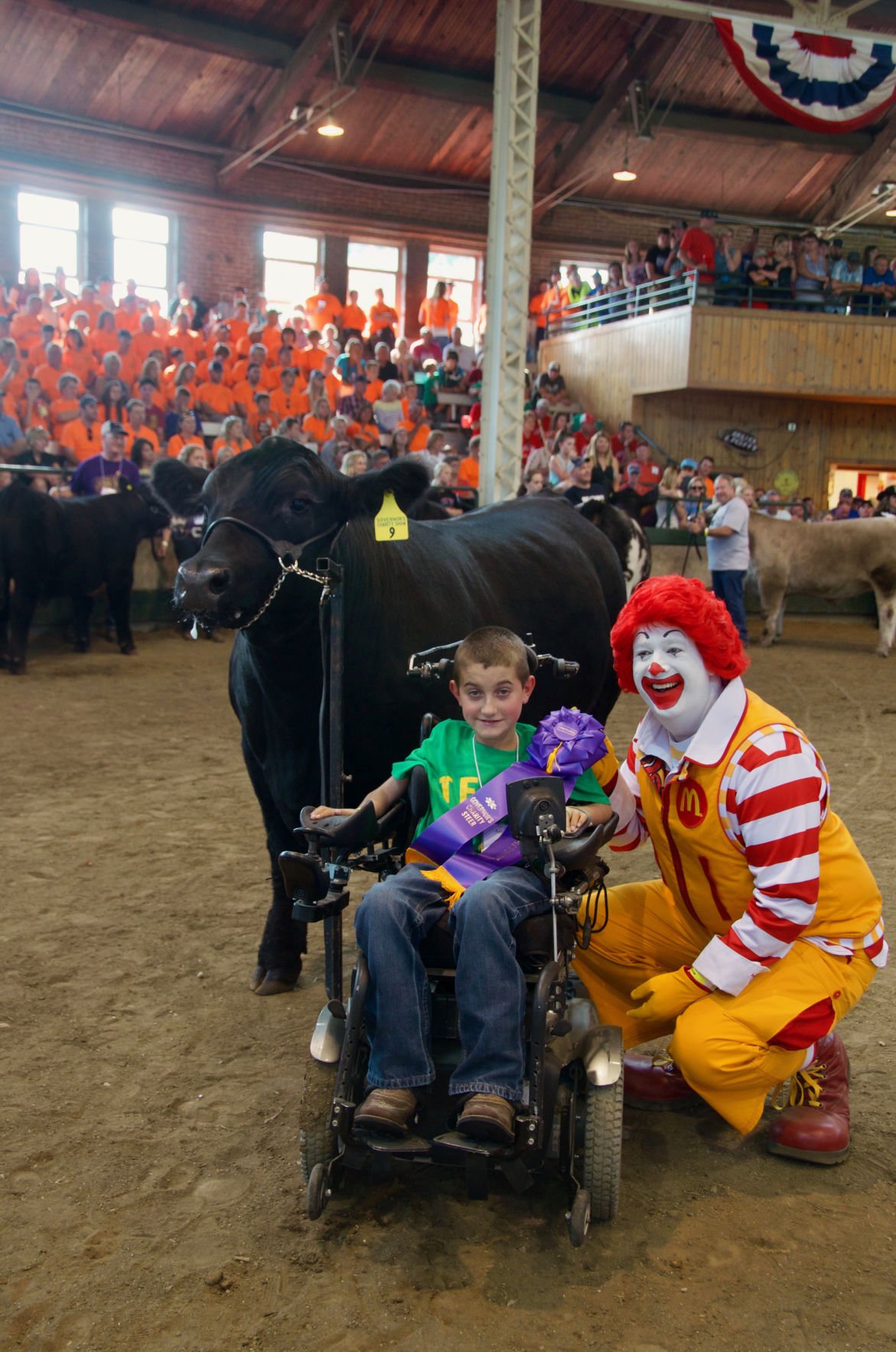 Alec Gotto got a standing ovation during the Governor's Charity Steer Show at the Iowa State Fair in August 2017. He was awarded the People's Choice award during the show. (Journal photo by Jennifer Carrico.) 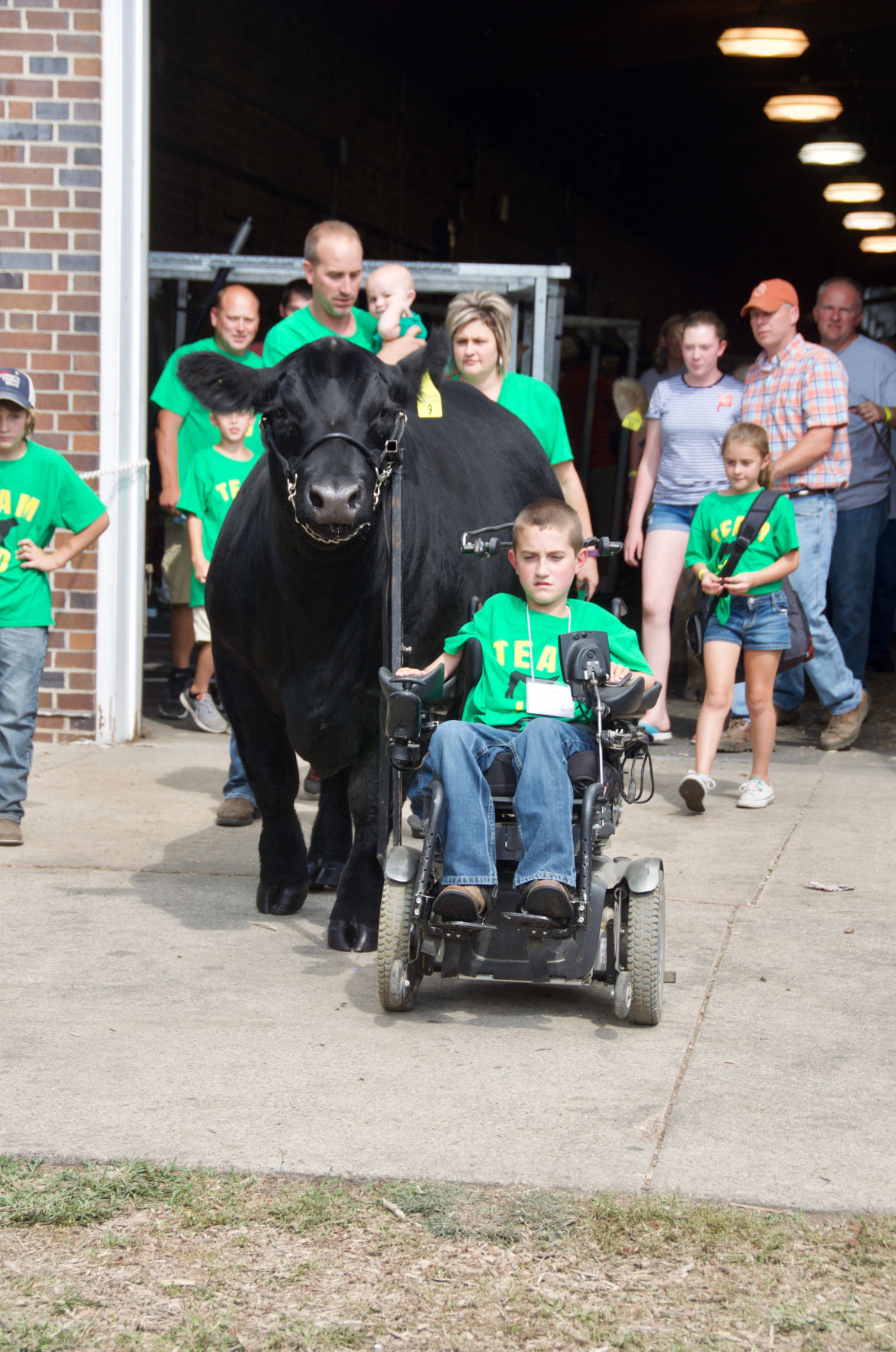 Alec Gotto is followed by his family out of the cattle barn to head to the pavilion during the Governor's Charity Steer Show at the Iowa State Fair in August 2017. (Journal photo by Jennifer Carrico.) 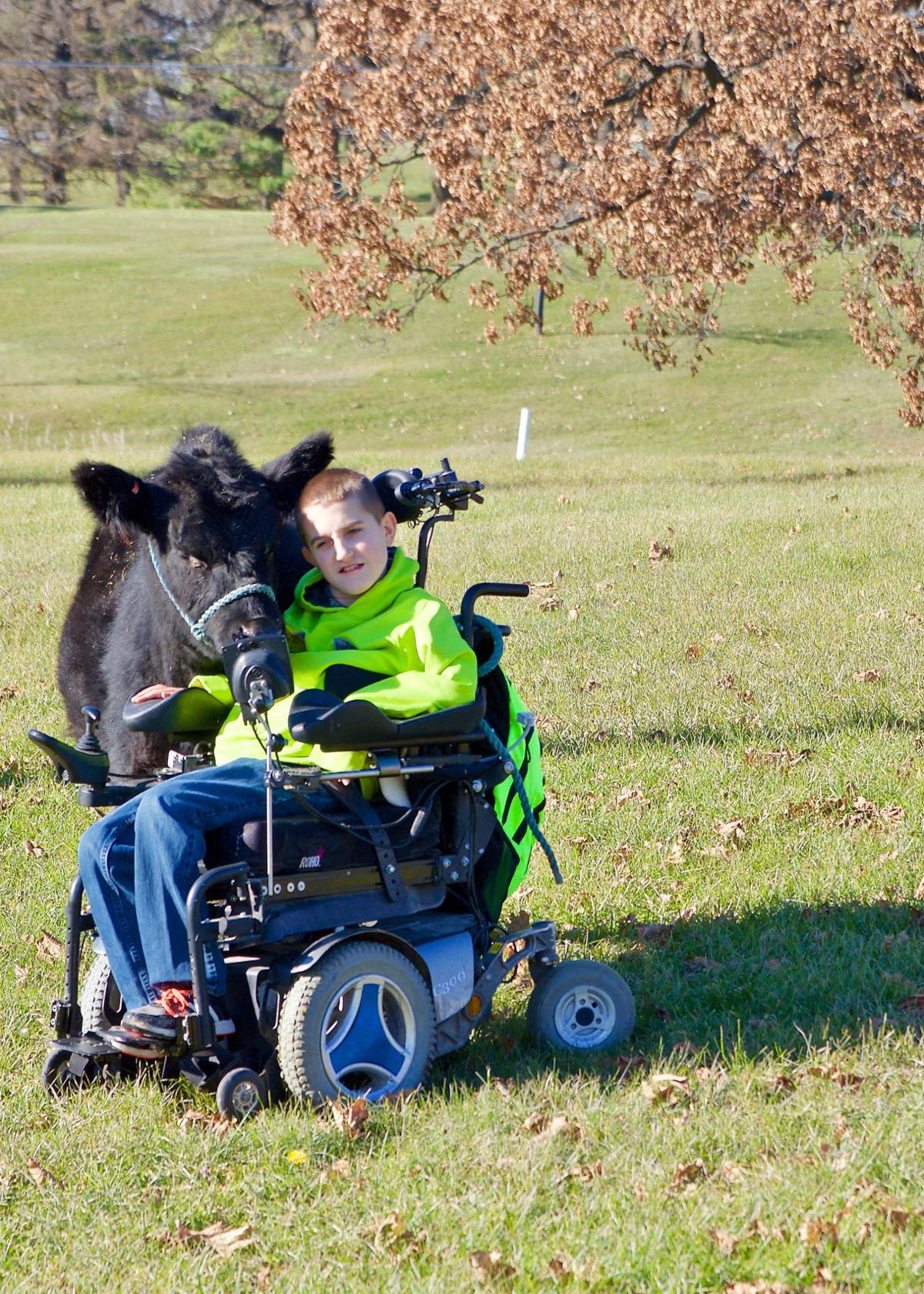 Alec Gotto spends a lot of time in the yard practicing with his cattle before heading to a show. (Journal photo by Jennifer Carrico.) 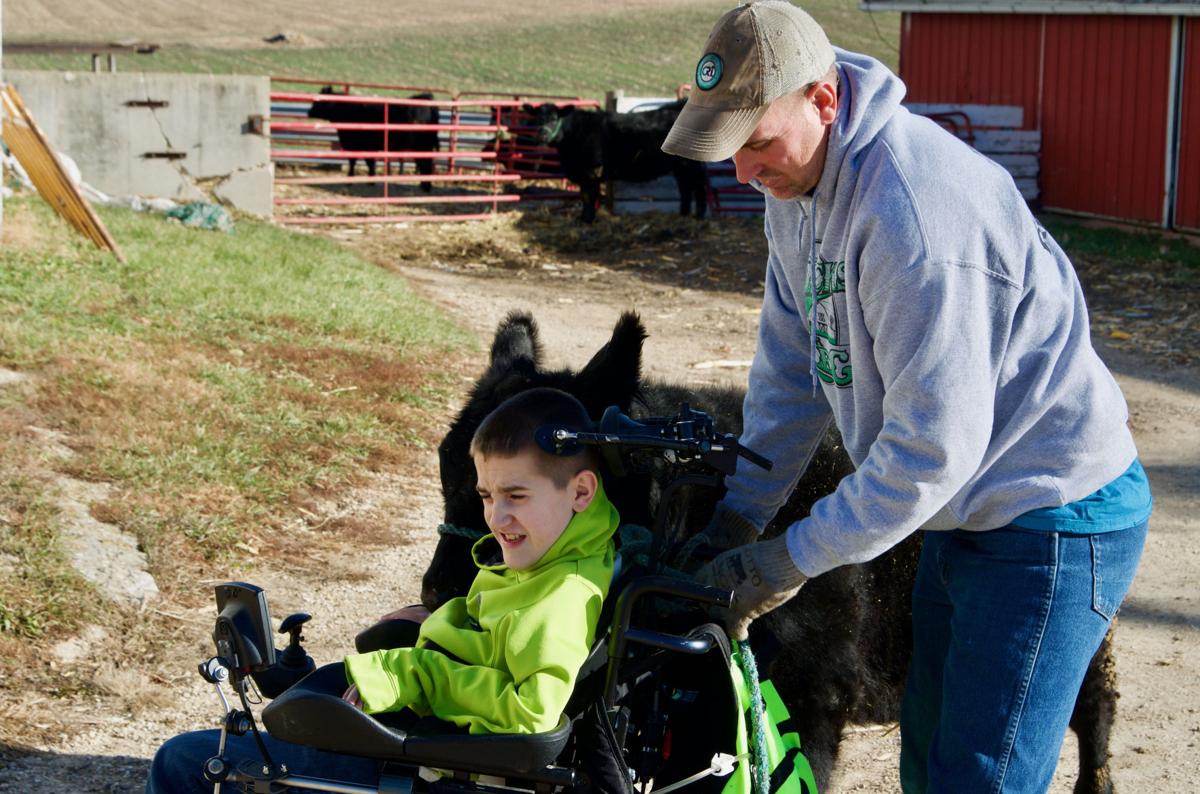 Chad Gotto helps his son, Alec, with his heifer at their farm. Chad said he knows some cattle wouldn't work for Alec to show, but they have been fortunate to find the right ones so far. (Journal photo by Jennifer Carrico.)

Alec Gotto got a standing ovation during the Governor's Charity Steer Show at the Iowa State Fair in August 2017. He was awarded the People's Choice award during the show. (Journal photo by Jennifer Carrico.)

Alec Gotto is followed by his family out of the cattle barn to head to the pavilion during the Governor's Charity Steer Show at the Iowa State Fair in August 2017. (Journal photo by Jennifer Carrico.)

Alec Gotto spends a lot of time in the yard practicing with his cattle before heading to a show. (Journal photo by Jennifer Carrico.)

Chad Gotto helps his son, Alec, with his heifer at their farm. Chad said he knows some cattle wouldn't work for Alec to show, but they have been fortunate to find the right ones so far. (Journal photo by Jennifer Carrico.)

Alec first gets the calf to eat out of a feed pan on his lap. After he can do that for a while and he talks to the calf, then Chad puts a halter on the calf and starts the process.

“We obviously want him to be safe, so picking a calf that will pay attention to Alec and knows the sound of his chair is important,” said Chad.

Before long, Alec and his calf have connected, and it’s time to tie the calf to the chair. The halter is attached to a bar on the chair with zip ties in case the animal were to spook, then it would break loose easily. It is an amazing sight to see the calf and boy scoot around together.

“I know I have to be tough and talk to my calves so they will follow me,” said Alec, who added that he wants to farm and raise cattle when he gets older.

Being on the farm is what Alec loves most, along with spending time with the rest of his siblings: Brenden, 10; Bella, 8; Karlee, 5; and Nolan, 1. Carrie said they don’t treat him any differently than the rest of the kids. He has things that are expected of him. The only difference is he is in a wheelchair and needs to go to therapy twice per week.

Alec likes to help with the daily cattle chores as much as he can. His favorite part is leading and showing the calves. Chad said Alec doesn’t get nervous, which helps keep the calves calm too.

This summer was his second year showing. His steer, J.D., short for John Deere, was shown several times. It was during the hot week in the middle of July, that Alec and J.D. gained many friends at the National Junior Angus Show. During the week, Alec helped wash, feed and care for J.D. The day before he was to show, they decided it would be a good idea to have a practice round to make sure it would work in the big pavilion.

“We met the Gottos at the National Junior Angus Show in July. My husband’s cousin, Dennis, had sold him the steer he showed, and we were all stalled together,” said Sara Deppe. “Our kids are all about the same ages and our friendship just clicked.”

Sara said as the group was assisting Alec for his practice trip to the show ring, she noticed how dirty the chair was from being in the barn and she asked if it was the only chair Alec used. When the answer was yes because they are so expensive, that’s when she had an idea.

“Carrie said, ‘We’d like to get a chair with tracks so it’s easier for Alec to get around with the cattle, but they are very expensive and the insurance company won’t pay for it.’ I told her we need to just get him one,” Sara said.

They launched up a Facebook group called “Tracks for Alec,” with a PayPal account and P.O. Box number for donations, in hopes of raising the $25,000 for a new chair.

“Honestly, we haven’t asked anyone for a donation. The story told itself and so many people from all across the country have donated,” Sara said.

Alec’s practice run through the ring went well, but when it came time for the actual show, the wood chips in the ring didn’t cooperate with his chair, but with the assistance of some ringmen, Alec showed J.D. and gained many friends that day.

Judge Lacey Robinson commented from the microphone as she discussed the class Alec and J.D. were in, “This is an incredible example that you can do anything when you put your mind to it. This young man is an inspiration to us all, just one of those special moments, and this is what it’s all about.”

Carrie said she gets nervous when Alec heads into the show ring, but she is also proud of what he can accomplish. “I always get goose bumps when he’s in there,” she said.

After 11-year-old Hannah Rogers, of Wilton, Iowa, met Alec at the National Junior Angus Show in July, she knew she wanted to help raise funds to get him a new chair. About a month later, Hannah decided instead of selling her lamb at the Scott County Fair, she would raise money for Alec.

“I gave a speech at our county fair sale to tell people I was going to raise money for Alec. I passed out flyers and there were people at the sale who came up to me and donated,” Hannah said. “I wrote thank you notes to all those who donated.”

Hannah was able to send the Gottos a check for $1,500, which she raised in a couple weeks.

Sara said the experience with the Gottos and raising money for Alec’s chair has been amazing. “The Gottos work together as a family unit. Each of them has their own place. And they are so thankful for every penny that has been raised and want to give back to everyone for their caring acts,” Sara said. “We probably have about three-fourths of the funds needed for the new chair at this time and hope to be able to make a purchase soon.”

Angus breeder, Dennis Deppe from Waverly, Iowa, and his family have been friends with the Gotto family for several years. The steer Alec showed this year, J.D., was raised at Deppe Angus.

“It’s so wonderful to know the Gottos and see them work together,” Dennis said. “We are hoping to finish off the amount of money needed to purchase the track chair and also provide additional money to purchase other equipment or upkeep that might be necessary for Alec to keep fueling his passion for the cattle industry through the sale of a full sister to J.D.”

The bred Angus heifer will be sold as Lot 1 of the Working Class Females Sale on Dec. 29 at the Summit Sale Facility near Hubbard, Iowa. A video of the female can be viewed at sconlinesales.com prior to the sale and she will be at the sale site a couple days before the sale.

“Alec is just an ordinary kid, except that he’s in a wheel chair. It feels good to be able to help him continue his love for the cattle industry and make it easier for him to do,” Hannah said.

For more information visit “Tracks for Alec” on Facebook.