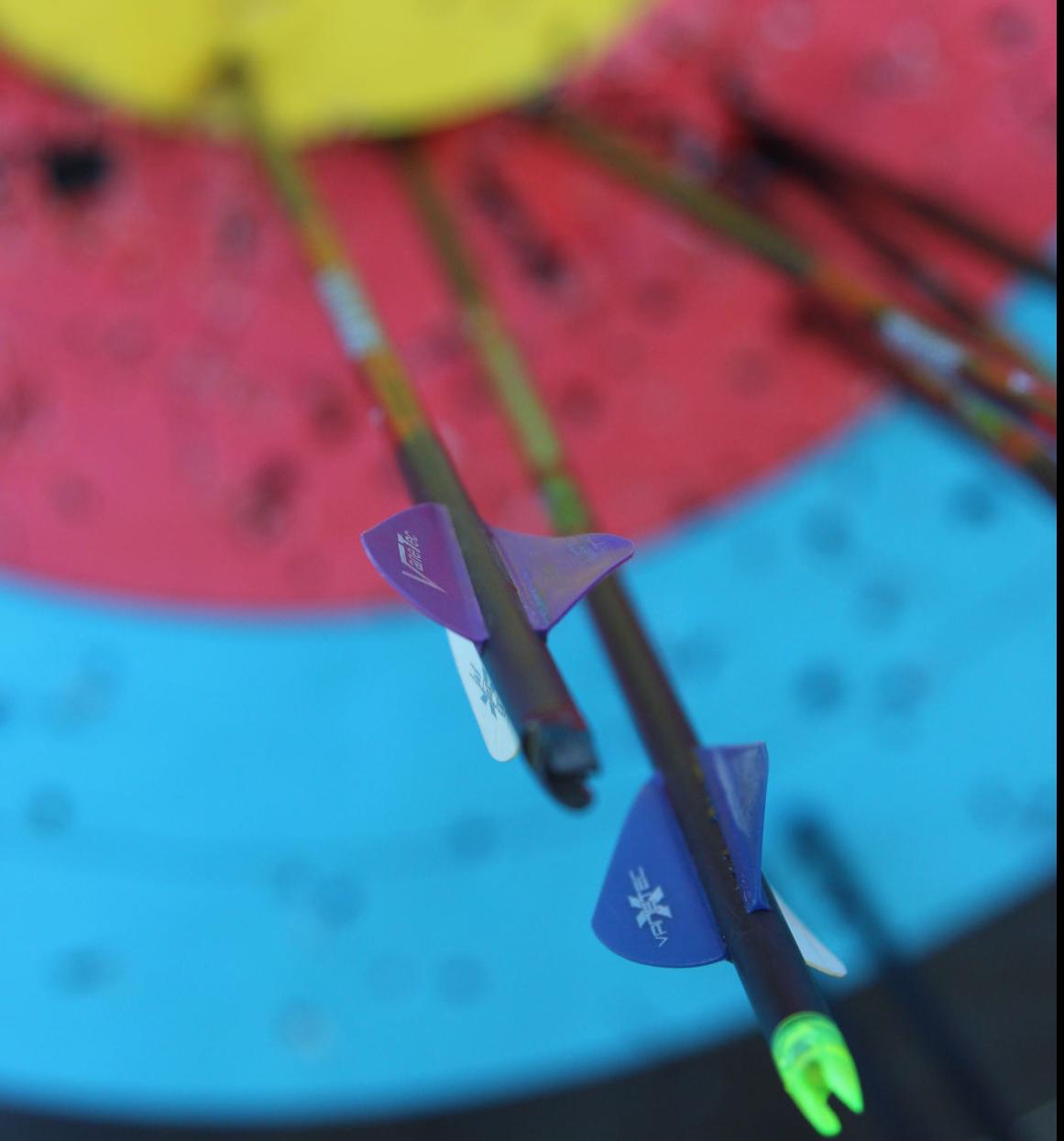 Practicing in adverse conditions like high wind and shooting into the sun are how 4-H Shooting Sports members improve their accuracy for competition. (Journal photo by Jennifer M. Latzke.) 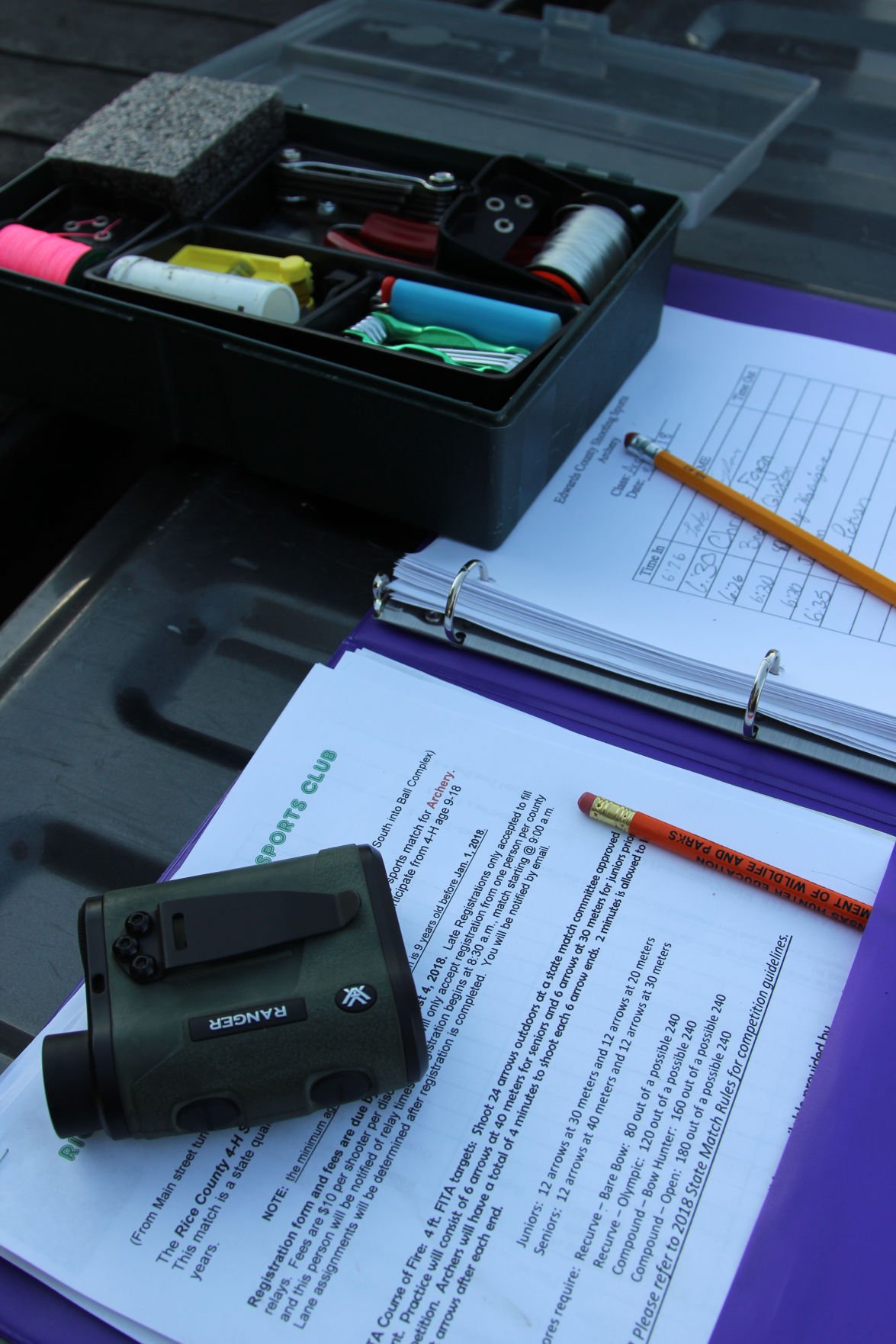 Brian Taylor's range equipment includes a sign-in sheet for members and a kit to help with any bow-related emergencies. Taylor is a certified archery instructor for the Kansas 4-H Shooting Sports Program in Edwards County. As such he's responsible for range safety and training for the members and their families. (Journal photo by Jennifer M. Latzke.) 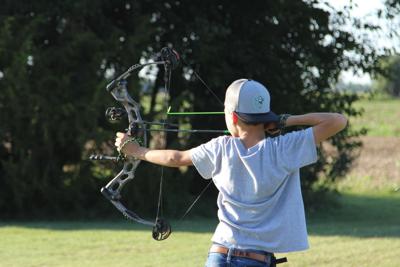 The summer sun is setting in the western Kansas sky, and the young 4-H member is still practicing.

Nock the arrow. Grip the bow and draw back the bowstring. Breathe in, aim and release—repeat, repeat and repeat, until the sun is finally too low in the sky to see the target down range.

It’s a familiar scene to parents and certified instructors of 4-H members enrolled in the Shooting Sports project. Proponents of the project say this activity not only teaches youth firearm safety and improves their competitive marksmanship, but it also builds life skills that follow youth on into adulthood.

Ray Bartholomew is the Kansas 4-H Shooting Sports volunteer coordinator. He began more than 20 years ago as a parent volunteer with the program because his son was interested in the sport. Over the decades, he said he’s seen that the shooting sports project, perhaps more than any other, really touches on all the life skills that 4-H promotes. From self-motivation and self-discipline, to critical thinking and concern for others, Bartholomew said the shooting sports project puts the head, heart, hands and health first for the members.

Brian Taylor, Kinsley, Kansas, is one of the more than 500 adult volunteers in Kansas who help with the shooting sports project. Volunteers are encouraged, but to mentor and instruct any shooting discipline in the program, they must be certified, Bartholomew explained. “And, it’s a selective process,” he said. “They get asked to go through certification and to be instructors.”

Taylor went through the mandatory three-day training to become a certified archery instructor for the Kansas 4-H Shooting Sports Program in Edwards County. For him, it was a way to share his love of archery and hunting with his children and other shooting sports members in the county.

“I grew up shooting competitive archery,” Taylor said. “A lot of guys were instrumental in taking the time out of their busy schedules, including my dad, to teach me how to shoot and hunt. And I always thought if I had the chance to pay that back I would.” Six years ago the opportunity to rebuild a struggling archery program came along.

Taylor’s children all shoot in many disciplines, but have started to focus more on archery than others. His older son Levi stopped shooting, preferring to focus more on high school athletics. For his younger son Luke, the appeal is making friends and meeting the goals he sets for himself.

“I can hang out with my friends and still do a sport,” Luke said. “My goal is to qualify for state.”

“My wife Tonya and I believe in teaching our children to shoot from a young age,” Brian Taylor said. “But, we also don’t cram it down their throats either.” For the Taylors, it’s important that their children be comfortable and safe around any firearm—whether they choose to compete or not.

“It really is a family project for many,” Bartholomew explained. Over the years he’s seen parents, who are gun enthusiasts themselves, bring their children to shooting sports trainings and competitions. Partly, he said, it’s so that they can share their hobby, and their children can benefit from other adults drilling them on safety and technique. But in the process they also learn how they can improve their own shooting skills—even as adults who may have years of experience.

Bridgette Fagen and her fiancé Jeremy Baker brought her children Daniel and Christa to Taylor’s backyard for practice with other county members. Baker said he’s seen how the project has brought the siblings together.

“It teaches them both discipline,” he said. “I’ve been shooting a bow for more than 20 years and I learn things by watching them pick it up every day.”

“It’s better for them than sitting in the house playing video games,” Bridgette said. “This will last them a lifetime and I hope it’s something that they will pass on.”

The program attracts youth who want to challenge themselves, like Edwards County 4-H member Brett Gleason who’s a senior in high school and plays team sports but still finds time for archery because he enjoys the challenge.

“My goal is to get to state and do good there, place in the top five,” he said.

According to the National 4-H Shooting Sports program:

• More than half of the 500,000 4-H members choose to enroll and participate in the program each year.

• More than 20,000 adult volunteers have become state or nationally certified instructors, acting as mentors and running their local club programs.

Of course, competitions are the driving factor for many youth to participate in 4-H Shooting Sports. Kansas has produced some excellent competitors over the years, with many members moving on to compete at the collegiate and even Olympic levels.

But even long after competitions are done, the skills developed in the 4-H Shooting Project stay with members, in their careers and in their hobbies.

“Locally, we have two or three former members who are now in law enforcement,” Bartholomew said. And while he doesn’t fault the law enforcement firearms trainers, he did add with a smile that he feels much safer with them patrolling simply because he knows they have 4-H training in their backgrounds.

Of course, there are opponents who say the shooting sports program promotes gun violence and to that Bartholomew says they have the wrong idea. The curriculum emphasizes safety at every step and every level, and practices and competitions focus on accuracy or on hunting wildlife. That includes ensuring that the targets used in competitions are not human silhouettes.

“The curriculum teaches target shooting or hunting safety,” Bartholomew said. Therefore, the targets look like the typical bulls eye pattern, or in the instance of the hunting safety discipline, they look like animals.

Coming from a family background with little to no firearms experience, Bartholomew said he himself was hesitant for his son to participate all those years ago. But then, he came to realize the project first and foremost emphasizes safety lessons, whether it’s in practice and competition, or at home near firearms that they come across.

“Every boy, and very often young girls too, will pick something up, whether it’s a stick or some other object, and pretend it’s a gun,” Bartholomew said. “We teach them to treat all equipment as if it’s loaded and to never point it at another person,” Bartholomew said. Better to teach them that firearms are not toys and this project does that, he added.

“One of the things we do before we allow a new archer to shoot is they have to take a class before they can shoot on the range and their parents must sit in on it,” Taylor said. “We go over the equipment, what they can and can’t do, and safety, safety, safety. They may get tired of it, but we want them to get into a routine.”

It’s a routine of safety and discipline that builds a sense of achievement in youth, and leads them to becoming adults who respect firearms, Bartholomew said.

And that lasts long after the sun goes down and the equipment is put away for another day.

Perhaps the most recent Kansas 4-H Shooting Sports success story is Wyandotte County 4-Her Lydia Paterson, Kansas City, Kansas. She competed in the 2016 Olympic Games in Brazil in the Women’s 10m Air Pistol and took 29th place. She made the national team when she was 16 years old, one of the youngest members ever, according to USA Shooting.

Briana Jacobus, Kansas 4-H Shooting Sports program coordinator, says Kansas members have somewhat of an advantage when it comes to competition—the Kansas wind. If you’re practicing in the high winds of Kansas, a little breeze at a competition is nothing, she said.